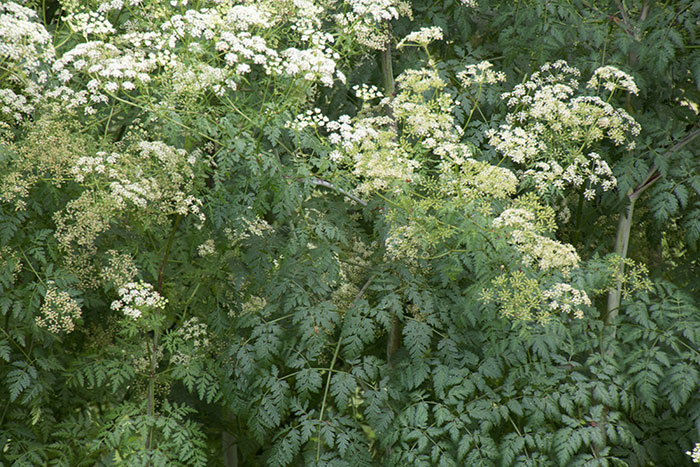 Spring growth is upon us, and a little weed management and prevention can go a long way in keeping a small problem from becoming a big one. Case in point: In a recent Field Crop News newsletter from Penn State, Dwight Lingenfelter, extension weed science associate, urges producers to recognize and manage poison hemlock early before it causes problems.

“All parts of the plant are poisonous, and some studies have shown toxicosis at 0.25 percent fresh weight (of the animal’s weight) for horses and 0.5 percent for cattle; that would be 2.5 to 5 pounds of material per 1,000-pound animal,” Lingenfelter says.

Poison hemlock starts out as a basal rosette of leaves and becomes an erect branched plant after overwintering, Lingenfelter explains. A species in the parsley family, poison hemlock resembles carrots or parsley until it blooms white flowers in midsummer.

“Plants can reach up to 6 feet tall and have a smooth, hollow stem with purple spots and a disagreeable odor when the leaves are crushed,” Lingenfelter says.

This problem plant hails from Europe, northern Africa, and western Asia. It was brought to North America as an ornamental garden plant, Lingenfelter explains. Poison hemlock is made up of numerous closely related pyridine alkaloids, including coniine, an alkaline oil that is volatile and colorless.

Efforts to control this plant begin with identification of the plant and any problem areas that might be ideal for growth or not commonly checked. Lingenfelter cautions producers clearing poison hemlock to wear protective clothing to guard against skin irritation.

While digging plants out with a shovel is one effective method, herbicides are often recommended for broader control over larger areas and should be applied before plants bolt in early spring. Lingenfelter recommends using 2,4-D + Banvel/Clarity, Crossbow (2,4-D+triclopyr), or glyphosate as a spot treatment.