Stefan Hay Company grows and harvests nearly 1,000 acres of orchardgrass and timothy hay each year on their western New York farm.
Webster defines the word unique as “being without a like or equal.” I wasn’t searching for unique when I first called Mike Stefan last fall; I was just looking for a commercial hay farm to visit, and Stefan Hay Company in North Collins, N.Y., seemed to fit the bill.

I got the hay farm that I desired. I also got unique. 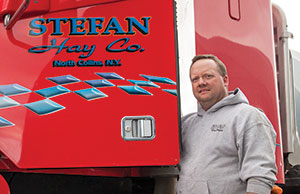 Mike Stefan
At first glance, the Stefan operation grades out like a lot of other farms: nearly 1,000 acres of hay (including new seedings), 500 acres of corn, and 500 acres of soybeans. However, those traditional crops are paired with 186 acres of grapevines.

Drilling down on those hay acres, you won’t find 1 acre of alfalfa. Stefan grows an equal amount of pure orchardgrass and pure timothy hay. That’s the way it’s always been. To draw on the theme of an old country tune, he was all grass before all grass was cool.

Each summer for a period of several weeks, Stefan moves his operation about 120 miles to the northeast, near the shores of Lake Ontario, and bales 2,000 to 3,000 acres of wheat straw.

Finally, and it’s a big finally, Mike Stefan is a full-time middle school teacher and has been for a long time.

How does it all happen?

The answer is an easy one: Stefan Hay Company is a family farm in every sense of the concept. Mike’s wife, Dolly, is an emergency room nurse. The couple has four children: Dylan (18 years old), Tyler (16), Ryan (13), and Carrisa (11). The farm has only two full-time employees.

“My dad helped me a lot in the early years, and now the kids are an integral part of what we do,” Stefan said. “They keep things moving when I’m tied up at school or working away from home. The boys can operate any piece of equipment we have. In fact, some of the workers prefer to talk to my sons over me,” he chuckled.

The home Stefan farm, which consists of 210 acres, wasn’t always a diversified hay farm. Mike’s dad was a dairy farmer, but that wasn’t going to fit the younger Stefan’s goal of teaching, and he really didn’t have a desire to milk cows. However, he also didn’t want to lose the family’s farm.

Stefan started in the hay business in 1999, a couple of years after he started his teaching career. At that time, his dad was still milking and there wasn’t any extra land available on the home farm; it was needed to feed the 70 dairy cows. He bought a large square baler and started doing custom work for the neighbors.

“The learning curve was steep,” recalled Stefan of those early days. “Big square bales just weren’t common, and most of my customers had to figure out how to handle and feed them. I had to figure out how to bale them. Some bales were too tight, others were too loose. Working with that early hay preservative equipment was also a challenge. Small square bales still ruled the day,” he added.

In addition to custom baling, Stefan also made some of his own hay from rented acres. “My creditor mentioned that I was doing pretty well with what hay I was selling and that maybe I should concentrate on that side of the business. By that time, more people were getting into the custom baling business, and it was a good time to transition,” he added. 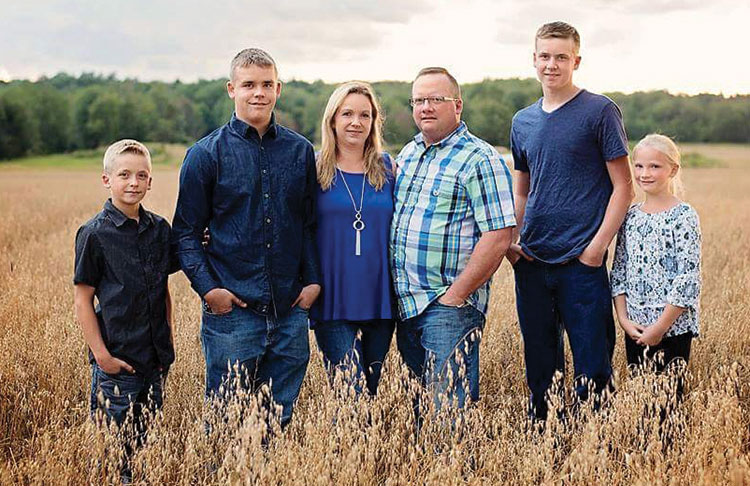 In search of CRP

It was on the advice of a hay broker friend that Stefan started seeking out Conservation Reserve Program (CRP) land to build an acreage base. “I found out where the CRP land was and would contact the owner to see when it was coming out of the program, then I’d offer to farm it,” Stefan explained. “Sometimes I’d slip them $100 to give me a call when their contract expired. The custom work gradually went away,” he added.

These days, Stefan owns 500 acres and rents another 1,700. What hasn’t changed is that he has always grown pure grass hay. At first, he only seeded orchardgrass. The timothy acres were added about 10 years ago. “The timothy market kind of found me as more dairy farms were in search of straight timothy,” the Empire State hay farmer said.

“I knew if I tried to grow alfalfa that my hay would be too variable with alfalfa in the high spots and grass in the low spots,” Stefan explained. “I wanted a pure product and one where it was easy to control weeds.”

Initially, Stefan produced orchardgrass hay because dairy farmers had an interest in putting a little dry hay into their total mixed rations. Now, Stefan’s orchardgrass and timothy are also sought by dairy farmers as an effective calf, heifer, and dry cow fiber source that is palatable.

Nearly all of Stefan’s production goes to Northeast dairy farms, stretching from Pennsylvania to Maine. Many, of course, are in New York. Stefan noted that a lot of his customers have high-end cow genetics and show cows.

Stefan will usually seed his orchardgrass or timothy fields in the spring, but there are years when he will seed in the late summer. If seeded in the spring, he also will include some oats as a companion crop for his timothy seeding fields.

Stefan buys an orchardgrass variety mixture, planting 18 pounds of seed per acre. He generally obtains yields of 3.5 to 4 tons per acre from his orchardgrass fields, which are harvested four times per year. “We usually quit baling about mid-October when the time changes,” Stefan noted.

Timothy is seeded at 15 pounds per acre, yielding about 4.5 tons per acre on two cuttings. Broadleaf weeds are controlled using 2,4-D, and hayfields generally stay productive for five to seven years. About 50 pounds of nitrogen per acre is applied after each grass cutting in the form of urea ammonium nitrogen (UAN).

Stefan Hay Company fills and ships 100 semi loads of wheat straw that they buy behind the combine each summer.

It’s between hay harvests during the summer, and when school is out, that the Stefan crew makes their way northeast to bale wheat straw. They work from near New York’s northern border down to almost the Pennsylvania state line. Stefan buys straw behind the combine at four to five different farms. His two Case IH balers make enough straw to fill over 100 semi loads each year off the field.

“The straw market really picked up when dairy farmers started using it as a feed ration component,” Stefan explained. “Most of the straw we load on the trucks in the field and deliver it directly to the customer. If a truck is going home, we’ll unload it there and store it.”

With nearly 1,000 acres of hay, an equal amount of row crops, and 186 acres of grapevines, there would seem to be plenty to keep a farm owner occupied. But Mike Stefan is a teacher with several degrees, including a master’s degree in education.

Stefan teaches at the Springville- Griffith Institute Central School District. He currently instructs his middle school students on a range of technology topics in the district’s industrial technology department.

A typical school day begins at 4 a.m. for the teacher-farmer. He spends a little time at home doing billing, checking emails, and taking care of other farm business. He likes to be at school by 6:30 a.m. where he prepares for the day’s classes. After school, he’s back home to take care of any remaining farm duties, which are at least less demanding during the winter months. 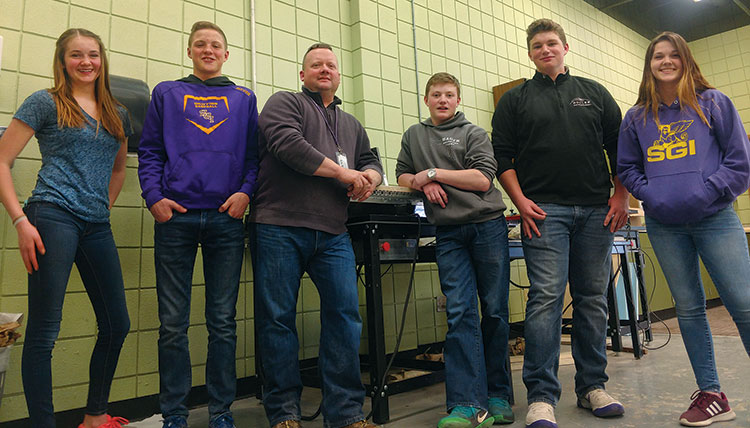 Mike Stefan poses with some of his technology class students. He has taught for 21 years and said, “I teach because I love it.”

“I teach because I love it,” Stefan said. “It’s been my profession for 21 years. Farming, on the other hand, is my lifestyle. This all works because of my family.”

To be sure, a unique operation in many ways.

This article appeared in the April/May 2018 issue of Hay & Forage Grower on pages 6 and 7.

Early adopter is an understatement Next