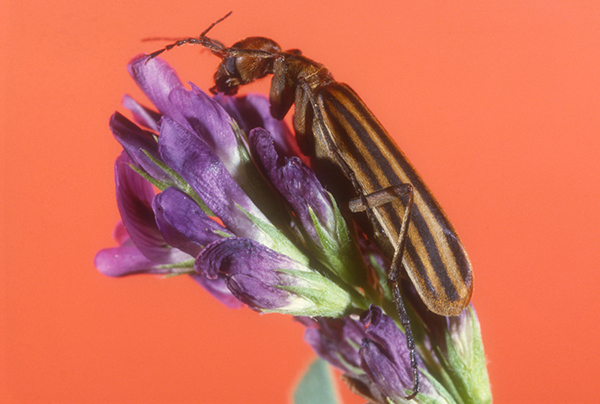 J.L. Capinera
Blister beetles, dead or alive, can be a major problem when they infest alfalfa fields. It's not because of what they eat, but rather what eats them. Though the insect is toxic to sheep and cattle, the beetle may actually be lethal for horses. Blister beetles have become an issue in South Dakota, according to Anitha Chirumamilla, South Dakota State University Extension entomologist, and Karla Hernandez, SDSU Extension forage specialist.

In a recent edition of the iGrow digital crop newsletter, the extension specialists reported that blister beetles are generally attracted to the blossoms and pollen of alfalfa. Hence, they are most likely to be a problem in fields that are cut postflowering.

Blister beetles harbor a defensive chemical substance called cantharidin; if crushed and contact with the skin occurs, a blister forms. Similarly, if livestock consume the beetles while eating alfalfa hay, the same effect occurs on the lining of the stomach, intestine and urinary tract. The three different species most commonly seen in alfalfa are gray blister beetle, black blister beetle and striped blister beetle.

The striped blister beetle has 10 times more cantharidin than the gray and black beetles. The striped beetles also exhibit a swarming behavior; this results in high numbers within a small field area.

Chirumamilla notes that the use of insecticides to control blister beetles is not recommended because there is no guarantee that the beetle will leave the plant, even after it's died. In fact, the risk of hay contamination can be raised following application of insecticides.

The South Dakota specialists suggest monitoring suspect fields as plants mature prior to harvest. This can be done with a sweep net.

Lovin' it: Enjoy McButter on your McMuffin Next