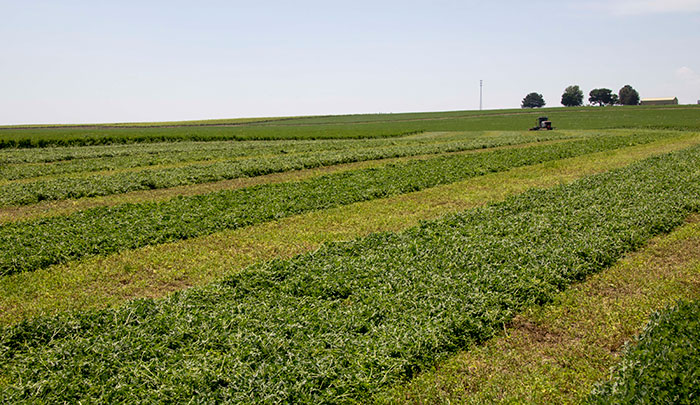 As alfalfa producers look to new varieties with the promise of improved fiber digestibility, don’t forget about some of the basics that will allow for full economic returns.

That’s the advice from Tom Kilcer, a crop consultant and independent researcher based in Kinderhook, N.Y. He made his comments at the recent Penn State Dairy Nutrition Conference in Harrisburg, Pa.

“A proven, highly digestible alfalfa variety has a lot of potential in terms of getting more nutrients from a given amount of forage,” Kilcer said. “But it’s not a magic bullet. Like any tool, we still have to master the basics to get the most out of it.”

There is no better place to start than with soil fertility and liming fields to the proper pH for optimum alfalfa growth. “Seed cost doesn’t change with a low fertility field, but forage yield does,” Kilcer said.

The agronomist also noted that sulfur is becoming a nutrient of major concern on protein-rich crops since little of that nutrient is now being deposited through rainfall.

“If you’re cutting by calendar date, then you are wrong 90 percent of the time,” Kilcer noted.

He suggested that a better approach for Northeastern producers is to use Cornell University’s decision tool that estimates stand neutral detergent fiber (NDF) based on alfalfa height and the percent of grass in the stand. It can be downloaded from the forages.org website.

“With these new high-digestibility alfalfa varieties, you can now harvest on the same date and get improved quality, or you can delay cutting and get the same quality with additional yield,” Kilcer said. “The correct approach will depend on the individual farm’s needs,” he added.

Cutting height is also important. Shaving fields at 1.5 inches takes off all of the regrowth points and nearly all of a grass’ photosynthetic plant tissue. This is what Kilcer calls “minimum tillage haylage.” He recommends cutting no lower than 3 inches to realize maximum regrowth potential.

One farm that Kilcer worked with was having trouble with spoiled haylage. Upon review, it was determined that the ash content of the forage was 17 percent. “An ash content at this level and even much lower can have a significant impact on milk production based solely on the amount of dirt that is replacing forage intake,” Kilcer noted.

“High-energy alfalfa is derived from preserving soluble carbohydrates in the plant,” Kilcer explained. “The key to doing this is to minimize the amount of respiration that occurs between cutting and chopping.”

Plant respiration is the dominant plant tissue function in the absence of sunlight. It is responsible for losses in dry matter, which is mostly highly digestible sugars and starches, and energy value.

Respiration becomes an issue when cut forage lays overnight or when it is placed into a narrow windrow. To speed drying time, Kilcer suggests using the plant’s ability to photosynthesize. This is accomplished by mowing in wide swaths, a practice that also gives the producer more opportunities to get hay made between rain events.

“Mowing in wide swaths will speed drying faster than any piece of iron you can buy,” Kilcer said. “Windrows don’t dry, they mostly compost. The middle of a narrow windrow is 100 percent relative humidity; nothing is going dry at that level and respiration is burning off the energy value of the feed,” he added.

The agronomist also noted that with a lower soluble carbohydrate concentration, the haylage would take longer to ferment because bacteria will lack the needed substrate (sugars) for fermentation.

Kilcer defines wide swaths as those that are at least 80 percent of the cutterbar width. Many machine manufacturers now make mowers that can be set up for wide swaths.

“The biggest problem we have when farmers start mowing in wide swaths is that the haylage gets too dry,” Kilcer noted. “They don’t realize how fast the moisture gets lost when the crop is laid out wide and able to photosynthesize.”

Kilcer recommends not using a conditioner when making haylage, though he notes they are advantageous for dry hay. “When we’re only trying to get hay down to 50 or 60 percent moisture, crimping the stem actually slows the drying process,” Kilcer said.

For alfalfa, Kilcer is not a fan of the tine (flail) conditioner because they strip off too many leaves. He also suggests running mowers with the rear shields up behind the conditioner. This will eliminate large lumps in the swath and makes for more uniform drying.

Kilcer concluded by emphasizing the need for using a bacterial inoculant on haylage. “Like all of the other factors we’ve discussed, inoculants will help you realize the full potential of these new, high-quality alfalfa varieties,” he said.

Set yourself up for alfalfa winter survival Next

Count him out on RFV Previous