By Luiz Ferraretto
The author is an assistant professor of livestock nutrition in the Department of Animal Sciences at the University of Florida.

Besides providing energy for maintenance and lactation, forages stimulate chewing and salivation, rumination, gut motility and health, regulate feed consumption, and are the structural basis of the ruminal mat, which is crucial for ruminal digestion.

Although commonly used forages such as corn and sorghum silage contain good levels of starch, fiber is the most common carbohydrate in forages.

Lignin is the key obstacle to fiber digestion as it obstructs the enzyme access to the digestible fiber fractions, cellulose and hemicellulose. In addition, rumen microorganisms cannot breakdown lignin.

Due to its importance to animal performance, this association between lignin and other fibrous fractions such as cellulose and hemicellulose is considered in many diet formulation models. This undigested or indigestible neutral detergent fiber (NDF) fraction is estimated using either lignin or quantified as the proportion of NDF remaining after in vitro or in situ ruminal incubations (for example, 240-hour undigested NDF [uNDF240]). Thus, the reduction of lignin or indigestible NDF fractions in forages improves fiber digestibility. 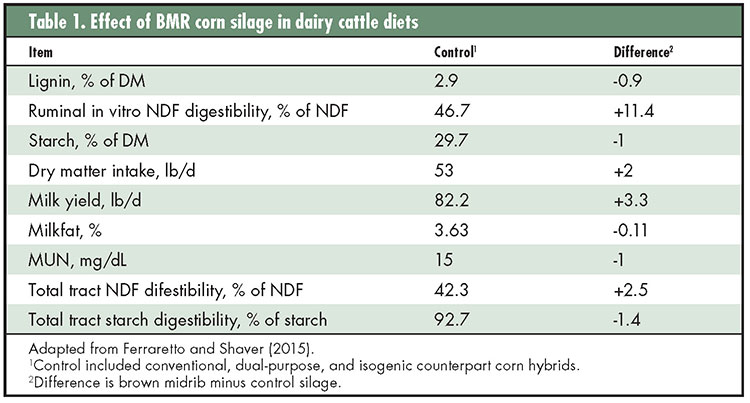 Improvements in performance are associated with reduced gut fill and greater passage rate. This concept may be of particular interest when cows are in early lactation and feed intake is limited. A study conducted by researchers from Cornell University evaluated the effects of feeding BMR corn silage from 14 days before to 21 days after calving. Cows fed BMR corn silage had 2.4 and 4.4 pounds per day greater DM consumption before and after calving, respectively, and 7.1 pounds per day greater milk production than cows fed conventional corn hybrids.

Nevertheless, it is important to account for the potentially lower yields of BMR hybrids than conventional hybrids when deciding which hybrid to grow. Such lower yields may be outweighed by the improved animal performance from BMR hybrids, but the magnitude of these responses may vary from farm to farm.

Furthermore, lodging could be a problem for some BMR sorghum hybrids, particularly when sown at high seeding rates. However, based on data from the University of Florida sorghum performance trials, several BMR hybrids are not susceptible to lodging.

An example highlighting the spring planting of 2018 is in Table 2. It is also relevant to note that yield and nutritive value of hybrids varies from year to year and in different regions. Therefore, going through hybrids performance trial results near your farm and across several years is a must before selecting a new hybrid.

The use of reduced-lignin alfalfa
garnered much interest by dairy producers and nutritionists. Several comparisons in the literature highlight lower lignin and greater ruminal in vitro NDF digestibility (plus 8 percentage units) for transgenic alfalfa lines with reduced-lignin concentration compared to control lines and for its isogenic counterparts.

Although preliminary feeding trials with young lambs were very promising (reports of greater intake and digestibility), improvement in performance by dairy cows is not available in the literature, to our knowledge. The development of reduced-lignin varieties is of great interest to the dairy industry. As discussed for BMR hybrids, it is important to account for potential variations in yields when selecting between reduced-lignin alfalfa and conventional varieties.

This article appeared in the January 2019 issue of Hay & Forage Grower on pages 8 and 9.

Reduce silage loss at the exposed face Next