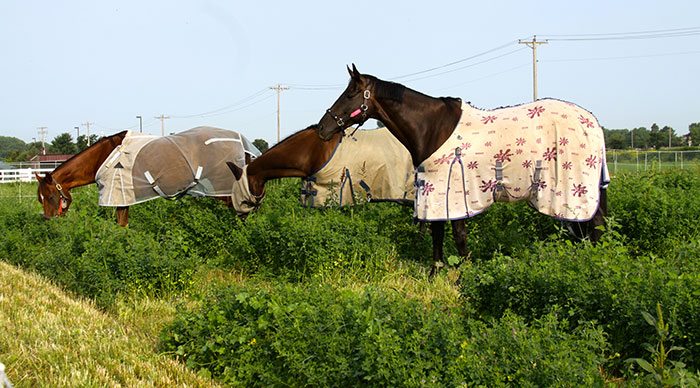 While most horses can typically meet their nutritional needs by grazing cool-season grasses, factors like time spent grazing and activity level can offset this balance. Horses with limited grazing or high nutritional needs are often fed grain; however, grazing legumes such as alfalfa or clover are a possible alternative to purchasing grain.

Researchers at the University of Minnesota recently completed a study evaluating the effectiveness of grazing horses on legume pastures.

In the study, six adult, stock-type horses were rotationally grazed on legume and legume-grass pastures over the course of multiple years and seasons. Eight varieties of alfalfa, one red clover variety, and one white clover variety were used. Stands were evaluated by yield, nutritional quality, and horse preference.

The researchers found that horses had the strongest preference for clovers, but all legumes were highly preferred and consumed. The pastures with the greatest yields were the ones that included alfalfa with no difference detected between straight alfalfa and alfalfa-grass mixtures.

At the beginning of the third year, some pastures had damage that was likely due to a combination of animals and weather. The greatest damage occurred in the pure clover stands. Clover with added grass had better persistence than straight clover. Below are the yields for the different stands over the course of the study. 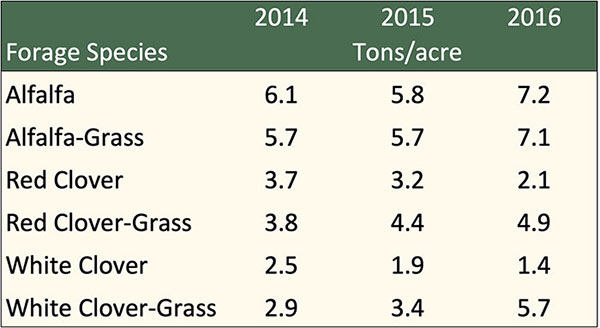 The nutritive value of the forages is listed below. All pastures were able to provide a high level of nutrition that exceeded the needs of an idle, adult horse. Digestible energy (DE) was high across all pastures as well.

For idle, adult horses with unlimited grazing, high-legume pastures could lead to excessive weight gain. On the other hand, for horses needing to gain weight, those in work and other horses with higher caloric needs, legumes provide an advantage over grass-only pastures and may help alleviate a need for feeding grain.

All legumes and legume-grass pastures, with the exception of clover, had less than 12 percent nonstructural carbohydrates (NSC). Less than 12 percent NSC in the diet is the guideline for horses diagnosed with obesity, laminitis, equine metabolic syndrome, and Cushings disease.

The researchers concluded that legumes are a good option for raising the forage nutritive value of pastures. They recommend including grass in clover pastures due to the lack of persistence in pure clover stands; alfalfa can be grazed as a pure or mixed stand. However, the researchers suggest testing pastures routinely and establishing a grazing plan with the assistance from a veterinarian or equine nutritionist.

What else can happen? Next