I can’t wait to see if this works 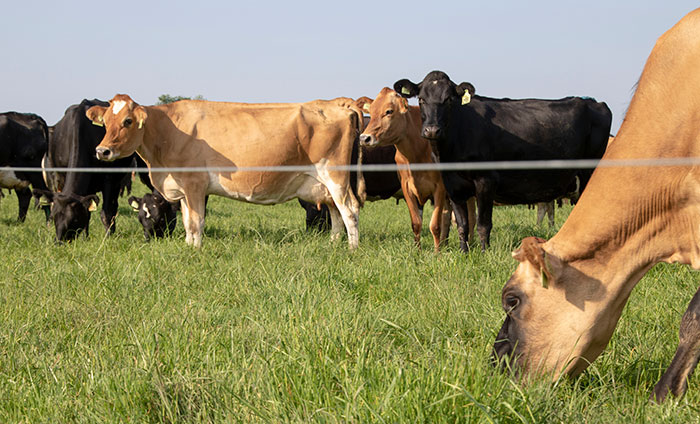 Technology in the livestock industry is catching up to our brethren on the cropping side. We can now point to livestock activity monitors, robotic milkers, GPS livestock tracking systems, and pasture biomass readers as breakthroughs for the way livestock are managed.

All technology has growing pains, but a recent news release from The Ohio State University (OSU) regarding a grazing technology still in womb really caught my attention. If it works, rotational and strip grazing will take on a whole new dimension of easier.

Anthony Parker, an animal science professor at OSU, is the lead researcher who is testing the virtual fence.

Each cow (or other animal) wears a solar powered, GPS-enabled collar. With the collar, animals can easily be tracked. The technology being used was developed and patented by Australia’s Commonwealth Scientific and Industrial Research Organization (CSIRO) and is licensed to Agersens, an Australian-based company. It’s marketed as eShepherd.

In addition to OSU, Agersens also has memorandums of understanding with Kansas State University and the University of Idaho to test the technology in the U.S.

Tracking animals with GPS is not unique, but the technology also allows the farmer to draw grazing boundaries on a laptop computer or tablet. If it works, this will reduce the need for moving portable fence.

When the animal approaches the boundary, they hear a warning sound first. If they continue forward, a shock is felt, similar to the pet fences used by many homeowners.

When it comes to livestock behavior and handling, what looks good on paper doesn’t always translate to reality. How well the cattle heed the warning sound and shocks is fundamental to this system’s effectiveness. Also, Parker points out that the behavior and tolerance to shock will likely differ among animals.

The eShepherd testing at OSU will be done after the researchers receive the approval of the Institutional Animal Care and Use Committee of OSU’s Office of Responsible Research Practices.

Parker will investigate whether the shock provided through the collar is sufficient to keep cattle within the designated boundaries.

According to the news release, they plan to do this by placing hay and additional feed just outside the boundary of the invisible fence. They then will monitor animal behavior to see how many shocks, if any, a cow will tolerate to get to the feed.

If the eShepherd system is able to contain livestock to a designated area, it would be huge benefit for managing pasture growth, rest periods, and allow for more frequent movements without taking multiple trips to the pasture or range. It would also provide an easy mechanism for keeping livestock out of environmentally sensitive areas and water sources.

Where the technology will go from here is anybody’s guess, but the concept is intriguing. It won’t replace the need to monitor pasture forage growth and livestock with boots on the ground. I also would be hesitant to rip out boundary fences.

Nevertheless, it’s good to see that technology is making strides in the most basic of livestock systems — that of grazing.

Below is a video that originates from the Agersens website that demonstrates the technology.

To graze or not to graze high-nitrate forages? Next

Spring grass is both a blessing and a curse Previous