An enduring relationship fuels their success 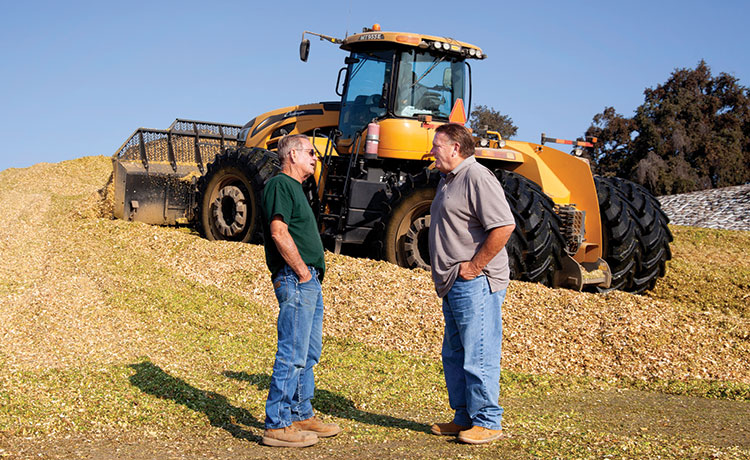 Synergy. Our longtime friend Webster defines it as a mutually advantageous conjunction or compatibility of distinct participants or elements.

But every now and then, I walk away from a farm operation with the feeling that I had experienced something really special. I now count D & G Chopping among this elite group. The real story of this Tulare, California-based custom harvesting outfit isn’t one of big machinery or rock-solid customer relationships, though both exist. The D & G crowd separator centers on an unshakable bond between two men. Meet Richard “Butch” Gist and Marvin Davis; together, they exude synergy, not to mention success.

Given free rein of a conversation, Gist will want to talk about Davis’ virtues, and Davis will want to talk about Gist’s. If they’re together, one will finish the other’s sentences. Their office desks sit about as close together as they can be without touching, Davis on the left, the more elder Gist on the right. This pair embodies more than a good business relationship; it’s an unbreakable connection, which has endured its fair share of tough economic times and enterprise overhauls.

The current story of D & G Chopping is a good one; the back story is even better. 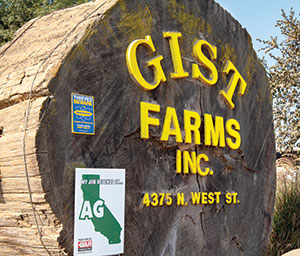 Gist Farms has survived and flourished amid a number of enterprise changes through the years.
Gist’s grandfather arrived at the farm’s current location in 1884. “He was looking for a high spot of ground that he could farm,” said Gist, who himself is past the 70-year-old mile marker.

Through the years, Gist Farms has seen many transformations, most of these prompted by significant changes in the dominant type of agriculture around the Tulare area. Gist’s father was heavily involved in growing white corn for the tortilla and taco market. “When that market died, we had to shut it down,” Gist said.

In addition to farming, Gist Farms expanded into a trucking operation when they were able to get contracts to haul corn from the Tulare area to General Mills in Los Angeles. They also started doing a lot of custom grain harvesting.

“It was about 20 years ago that the dairies started moving into the area from Southern California,” Gist explained. “In a short period of time, row crops began to disappear, which wasn’t good for an operation that relied on grain to grow, harvest, and haul. To survive, we quit growing row crops, sold the trucking business, and eventually transitioned the whole farm to nut trees — walnuts and pistachios. When the nut boom hit, we were ready with bearing trees. Next, we traded in the combines for choppers and began harvesting silage for the dairies,” he added.

These days, Gist Farms consists of 400 acres of nut trees, a smaller trucking business, a machine fabrication shop, and a nearby railroad spur where commodity feeds are delivered, stored, and moved to local dairies. Operated as a separate business entity, but sharing employees and infrastructure, is D & G Chopping, which is a 50-50 partnership between Gist and Davis.

Davis, whose parents came to California from Oklahoma during the Great Depression of the 1930s and found work on the famed 7,000-acre, fruit-producing Tagus Ranch, was hired by Gist Farms when he was in high school. That was 43 years ago. “Marvin got a lifetime sentence,” Gist laughed.

“They were a pretty big trucking company at the time, and I just stayed with them,” Davis recalled. Stay he did, and during the past years he has lived through the many transitions that the farm has been through. However, it’s been because of the ups and downs that Davis and Gist have built such a strong personal and business relationship.

Davis enjoys dealing with people and overseeing the day-to-day operations of the silage harvesting business. Gist, on the other hand, is a machinery person. “Marvin spends a lot more time on the chopping business than I do,” Gist said. “My deal has always been keeping the machines running and designing stuff. Also, Marvin tolerates paperwork better than I do,” he added.

“Butch is an inventor,” Davis said of his lifelong mentor. “He’s gotten a lot of patents through the years. One of his most notable is called a pressure-seal walking floor, which is used in commodity trailers. These are sold all over the world. Most everything he’s invented has been to solve a problem that we’ve had here on the farm,” he added.

Gist’s gift for machinery and all things mechanical has been mostly self-taught. “I wasn’t much for schooling because I had dyslexia,” Gist said. “For me, it’s been mostly the school of hard knocks,” chuckled the amiable farmer whose wife, Clare, is a school superintendent in Tulare. 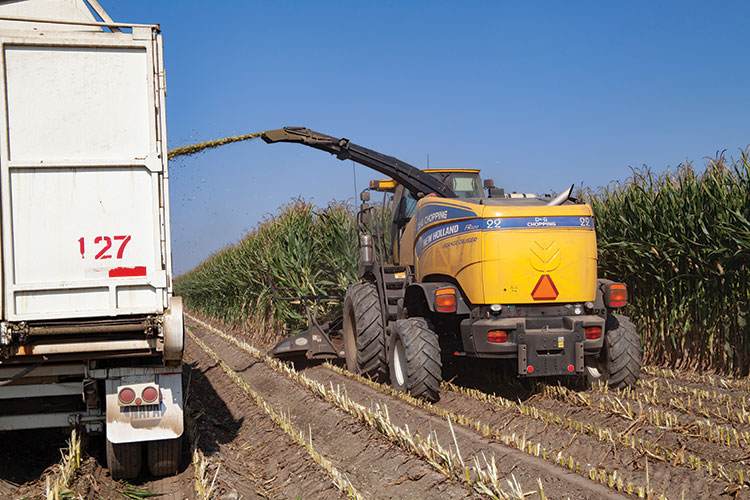 A loyal customer base

D & G Chopping isn’t the biggest custom harvesting outfit you’ll find, but they really don’t need to be. These days, they chop about 12,000 acres per year for five to seven large dairies. That volume is mostly corn silage, but they also chop some first and last cuttings of alfalfa and wheat in the spring. “Wheat is an easy crop to grow,” Gist said. “It’s not a big water-demand crop and can be double-cropped with corn.”

“Five of our customers have been with us since before the really big dairy boom started,” Davis noted. “They had some cheaper property and have been able to weather the economic dairy storms. All of our customers are within a 7-mile radius of the farm, and 80 percent of the acres are within 2 miles. Each chopper comes back home every night for servicing,” he added.

D & G Chopping runs four New Holland 600 series choppers. Three are usually operating in the field while one is used for a backup. They also provide the dozer-packing tractor, a Challenger wheel model. Even though Gist Farms has a dozen over-the-road trucks to haul commodities and other products, they contract for silage trucks during the harvest season.

Gist, always the practical engineer, noted that silage trucks need to be covered by state law to keep debris from blowing on the roadways. “This is also the only place in the U.S. where trucks run on the left side of the chopper. It goes back to the horse and buggy days,” he smiled, but also with a hint of frustration given that most chopper cab controls are on the right side of the operator.

Gist Farms, in combination with D & G Chopping, has 25 full-time employees. Several have worked for the Gist-Davis duo for over 30 years. Very little seasonal help is needed because when they are not working on the chopping crew, they are driving trucks or working in the machine shop. In other words, more synergy. 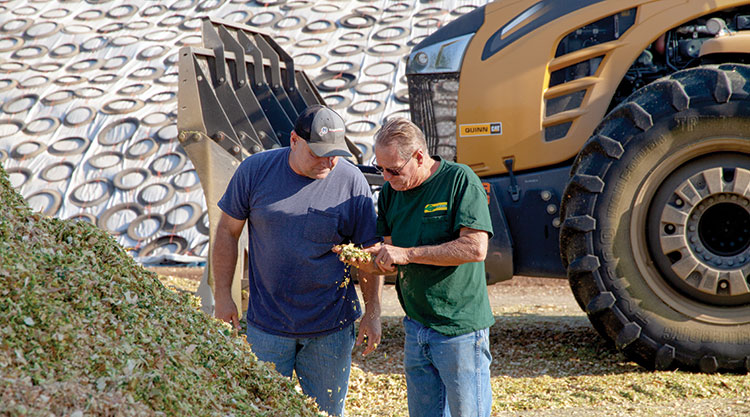 Butch Gist checks to make sure corn silage is being properly processed. Silage yields in the Tulare area routinely reach 35 to 40 tons per acre.

Beyond just being a chopping business, D & G also is a field tester for New Holland forage harvesters.

“We’ve been field testing for New Holland for a number of years, and our relationship with them has been an important part of our business,” Gist said. “When the FX choppers came out, they ran fine in Europe, but with our dust, high temperatures, and big tonnages, it was a real challenge to keep them going in our environment. So, it made sense to test them here. When something new is being developed, their engineers will stay here and monitor machines for the entire harvest season. Even when they’re gone, we still talk to the field-test guys in Europe and send them information on a regular basis,” he added.

That hard-knocks diploma spoken of earlier has served Gist well. It’s even taken him to Germany to confer with and advise New Holland’s engineers on the company’s forage harvesters.

Despite their management roles, Gist and Davis are not ones to dwell too long in the office. They take a “hands-on” approach, and you’re most likely to find them in the field during harvest or, in Gist’s case, in their modest machine shop.

Through the years, these two talented business partners and lifelong friends learned how to adapt and survive. They’ve earned an impeccable reputation in the community and know how to treat their customers. Both would say that their personal relationship has been largely responsible for their business successes. Or, you could just attribute it to synergy.

He’s got it covered Next

A lifelong learner and teacher of grazing Previous