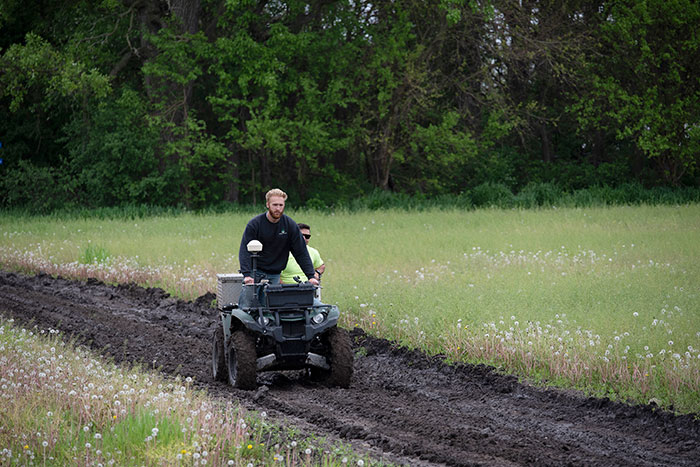 That’s the stuff that develops when soils are dry. It has been missing in action this spring across a good chunk of the U.S.

Last week, I had the chance to travel across several Midwest states and bounce from farm to farm along with a few of my coworkers. Rarely were sunglasses needed, but the same can’t be said for windshield wipers.

From the windshield, we viewed field after field of nothing but weed growth. Many portions of the meager number of planted fields were under water. Field activity was nonexistent except for the occasional all-terrain vehicle whose occupant was no doubt assessing the carnage.

The ramifications of this horrific spring will have long-lasting impacts on every type of farm enterprise — livestock and forage producers among them.

Haymaking was at a standstill

Of the 10 farms we visited over the course of four days, none were able to make hay as of the end of last week. In all cases, the grasses were headed, and the alfalfa was approaching first flower. Some reported pretty extensive winterkill, others were more fortunate from this perspective.

Several of the farms also had winter cereals that were headed out and past ready to cut. These farmers had concerns about how long it would take for these fields to dry out once it did stop raining. One farm had managed to cut and put up some triticale as baleage, but admitted they were rained out with several windrows still sitting in the field.

The current state of haymaking shakes out with the following known ramifications:

If there is an upside to this whole situation for dairy and beef producers who need stored feeds, it’s this: There is still a lot of growing season left.

It has always been my philosophy that situations such as alfalfa winterkill or a late spring are easier to compensate for than an extended midsummer drought. In the latter case, by the time you know forage inventories are going to be devastated, it’s too late to do much about it.

The current state of affairs is not just a matter of alfalfa winterkill and a severely delayed hay harvest. Completing this devastation trifecta is the fact that a lot of corn silage, which historically is the “ace in the hole” on most dairy farms and many beef operations in short hay/haylage years, has yet to be planted.

Pastures are wet but growing

The grazing herds we visited (both dairy and beef) were on their second or third time through the rotation with good, lush vegetation. In southern Indiana, tall fescue was heading profusely.

The soils in many pastures were extremely wet and pugged from hoof traffic. In some cases, even the high ground was soft. On dairy farms, the lanes were anything but firm and will require some maintenance when the weather normalizes.

Overall, the grazing herds had been impacted least by the wet weather, but even on these operations, no excess spring pasture growth had been cut for hay.
June 2019 Hay Pellets Next