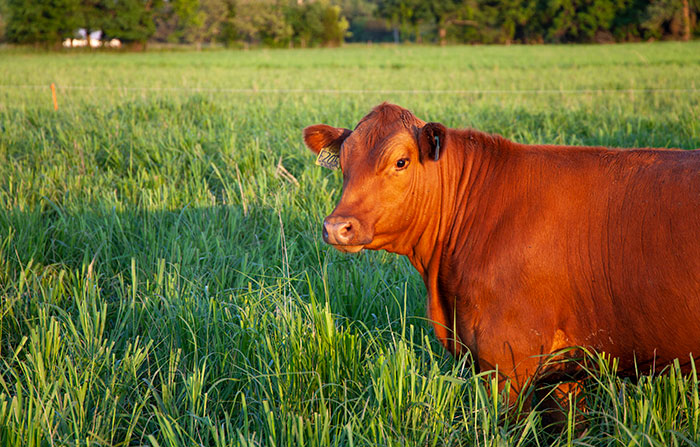 Transitioning some of your grazing acres to native, warm-season perennials can pose a utilization challenge.

Pat Keyser, director of the Center of Native Grasslands Management at the University of Tennessee, recommends a goal of seeding about 30 percent of pastures into natives for a typical Fescue Belt beef cattle operation. He does not suggest seeding this acreage all at once, but rather to use an incremental approach, seeding only a few acres at a time.

If only a few acres of warm-season natives are available, Keyser doesn’t recommend just putting them into your normal rotation.

“In that scenario, cattle will be going into the natives, adjusting rumen microbes to a new forage, and just when they made that adjustment, switching to a different forage, requiring some level of adjustment all over again,” Keyser says.

“Moving from one grass type to another is not as big of a deal as switching from grass to a grain-heavy diet, for instance, but there can be an adjustment period. When the forage they are going back to is an endophyte-infected tall fescue, such as Kentucky 31, that return trip can be rough. Switching back and forth can wash out the forage quality advantage of native grasses,” he adds.

Keyser explains several different approaches farmers can take to make the best return on investments during their transition to native grasses. He recommends using the limited acres of native grasses to optimize performance in a specific group of your herd. Using the warm-season natives to improve heifer development is a smart first choice.

Heifers, which are typically more sensitive to fescue toxicity, avoid that risk by grazing on warm-season grasses. The high-quality forage also makes it easier for heifers to attain an adequate rate of gain.

Most importantly, heifers need to get and stay bred, and grazing on native grasses can minimize the chances of breeding problems, says Keyser. Second-calf heifers could also graze on summer grasses to improve rebreeding.

For those with fall calving herds, another option is using the native grasses for backgrounding calves. According to Keyser, over a 90-day grazing period, warm-season grasses can produce 200 pounds of gain for a cost of only 25 to 30 cents per pound.

“For heifer calves, these same forages can provide a good leg up on development and attaining puberty in a timely and cost-effective way,” Keyser notes.

Since native grasses tend to be more reliable in dry soils, the few acres of warm-season grasses could also be useful during drought periods.

Keyser concludes, “Strategic use of small acreages of native grasses under one of the approaches described above can assure you get the best return on the investment in the short run.”