It may be another big tar spot year 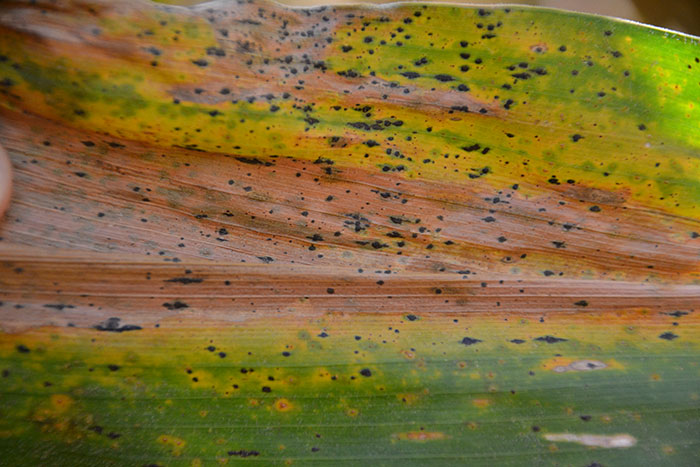 After a spring of rain, humidity, and cool temperatures, the Midwest is susceptible to another year of depleted yields and low-quality silage because of a new corn disease poised to spread over the area.

Tar spot is a fungal disease characterized by small black dots encircled by a narrow brown ring that appear on the leaves and husks of corn. The fungus first develops on the lower leaves and works its way up the plant, eventually appearing on the husk.

It was first discovered in the United States in 2015 and began to spread throughout the Midwest in 2016 and 2017. At the time, it was thought to be only a cosmetic leaf issue; however, in 2018, the disease began taking a toll on corn yields and silage quality.

Russ Higgins, a University of Illinois extension specialist, said in a presentation at the Illinois Forage Expo, “2018 was a game changer.” He noted the disease’s earlier appearance last year, with it showing up on corn in early July.

The rapid development of tar spot allowed it to be more detrimental to corn yields and silage. Early in the growing season, ideal conditions were present, so the disease began to proliferate.

Tar spot thrives in cool, humid conditions with long periods of leaf wetness. Higgins said, “Ideal conditions for growth are between 60°F and 70°F with a humidity above 75 percent, and leaves only have to be wet for seven hours for infection to take place.” With similar conditions this year and later planting dates, tar spot could have a huge impact on the corn harvest.

Effect of the spots

Higgins noted the disease is fairly new so there are still a lot of questions about it and its effects. Although no official research has been done, Martin Chilvers, an extension plant pathologist at Michigan State University, suggests that tar spot has a major impact on corn dry down. Dry whole-plant corn is hard to pack and more prone to mold growth. Chilvers notes fields infested with tar spot quickly pass ideal moisture levels.

Tar spot has been reported by farmers in Michigan and Wisconsin to reduce digestible components and the energy value of the feed in severe cases. Additionally, the stalks become damaged and weak.

There isn’t much that can be done to prevent tar spot once it appears in fields. Planting hybrids with disease tolerance is an option, but choosing the right corn will be difficult until researchers identify resistant hybrids.

“No hybrid of corn has been shown to be fully resilient from the fungus,” Higgins noted “But there are some that are tolerating it better.”

Some fungicide have been developed to prevent further damage from tar spot, but they are expensive and don’t guarantee control over the disease. If fungicides are applied too early, the disease will still have a significant effect on corn.

Higgins recommended scouting fields and checking with neighbors to see if tar spot is a problem in your area. It easily can spread from field to field so understanding where and when it shows up can help you make harvest decisions before it’s too late.