This will be a year for ditch hay 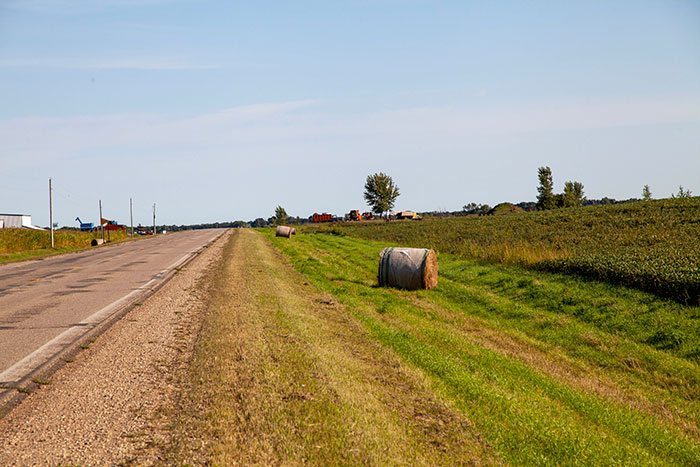 Making and using ditch hay to feed cattle can be a good way to combat a feed shortage. It’s a common practice across the U.S., but balancing beef diets around it can be a challenge.

Additionally, assessing feed quality of ditch grasses can be tough since they vary greatly in nutrient content. This variability often leads to unbalanced diets and poor cattle performance.

Garcia explains that the nutrient content differences are not from the plants’ composition but instead the time of harvest. North Dakota State University (NDSU) extension conducted a study in 2015 that supported this point.

NDSU extension analyzed 182 samples of harvested ditch hay across the state and found that most of it consisted of cool-season grasses, often smooth bromegrass. The study also found differences in nutrient content were highly correlated with the time of harvest.

“Crude protein percentage in ditch hay was clearly affected by cutting date,” Garcia says. “From a high of 9.4 percent CP before July 1, it dropped by almost 0.5 percentage units every 15 days down to 7.3 percent by August 15,” he reports.

Crude protein and TDN are inversely related so a later cutting will result in the more fiber and lignin and less energy. The study shows cutting in early July results in the best compromise between yield and quality.

Garcia advises to balance diets on the lowest likely value of a particular nutrient in the hay and base the ratio on the lower end of the animal requirements for that nutrient. This approach will make sure the basic requirements are covered. “Based on the data it seems safe to formulate diets using conservative values for ditch hay of 8.5 percent CP and 52 percent TDN as reported by NDSU,” the director notes.

According to Garcia, with low protein and less energy, ditch hay has the perfect opposing nutrient profile to be combined with distillers grains and corn coproducts. SDSU extension has looked into feeding distillers grains to beef cattle and found it results in improved animal performance.

Other things to consider

Before harvesting any ditch hay, be sure to inspect the area to ensure the ditch is safe and won’t result in a rollover accident. Also clear the area of any trash that may have accumulated in the ditch. Garbage can get inside bales that are fed to cattle and can also damage harvesting equipment.

Garcia also advises to look into whether or not the ditch was sprayed for weed control. Some herbicides used in ditches are not approved to be used on forages that will be fed to livestock.

Additionally, some broadleaf herbicides sprayed on ditch hay remain intact in cattle’s manure. If that manure is spread on fields, it can damage a broadleaf crop.

While there are challenges that can come with ditch hay, it can be a great resource to have if feed becomes short. It is readily available and, depending on harvest time, can be good source of nutrients when trying to stretch inventories until the next harvest.

Get a forage boost by overseeding pastures Next