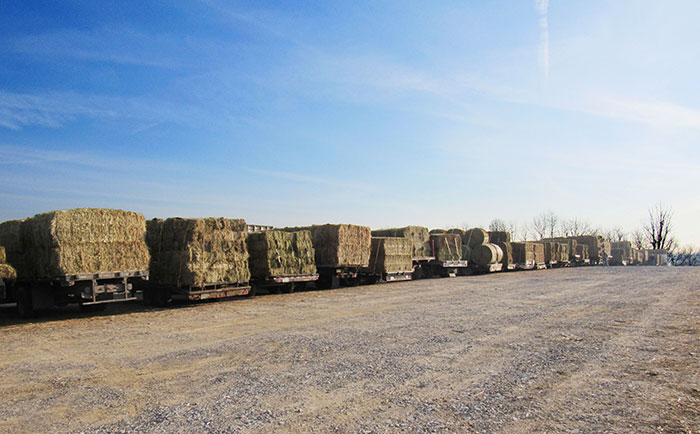 Many factors can have an influence on the price of hay. Some of these factors are related to the characteristics of the hay itself while others may be more external in nature (for example, lot size, storage options, and available handling equipment). Researchers at the University of Kentucky recently reported the results of a study that evaluated the relative importance of various hay characteristics to its selling price at auction. The results were published in the Agronomy Journal.

The researchers obtained data from an annual January hay auction held in Richmond, Ky., from 2012 to 2013 and 2015 to 2017. The hay was tested prior to selling, so buyers knew the forage quality of the hay they were purchasing. The data set included 215 observations with 59 percent of the lots being round bales and 41 percent being small square bales.

Bale form had a significant impact on hay price. Small square bales sold, on average, for $105 per ton more than large round bales. Further, the lighter the small square bale, the higher its selling price.

Not surprisingly, forage quality also had a significant impact on the auction hay price. Total digestible nutrients (TDN) was highly significant in explaining the price of small square bales but not round bales, though in the latter case it was still positively correlated. Relative feed value (RFV) as it relates to sale price was significant in all bale-type comparisons.

The size of the hay lot (number of bales in a single lot) did not have a major impact on the final sale price. This variable was completely insignificant for round bales. The researchers explained that having larger lots of hay may have negatively impacted prices to a small degree, but the factor was not nearly as important as bale type, forage quality, or even the weight of individual bales.

Buyers at the tested auction were primarily beef producers and equine owners. As such, the researchers noted that this impacts the study results. For example, these results might be different where the buyers are predominantly dairy producers or if the sale was held in a different month than January.

Get a forage boost by overseeding pastures Next