Rolling the dice on a fall alfalfa harvest 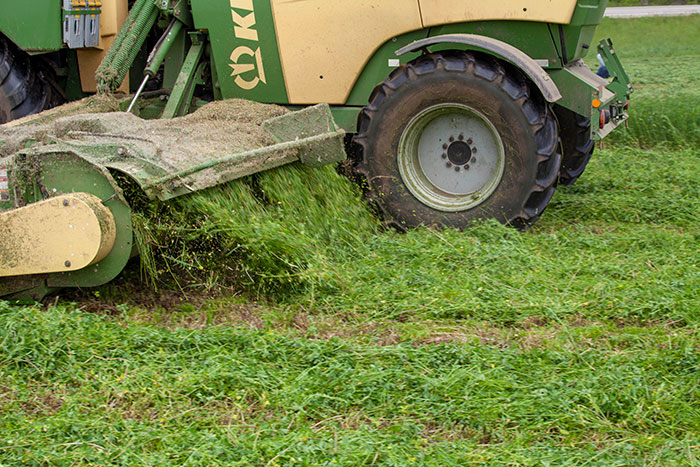 With Labor Day now in the rearview mirror, the decision to grab one more alfalfa cutting becomes more traumatic. That said, the need for high-quality feed is unquestionable on many farms.

As temperatures cool, alfalfa plants of the dormant ilk begin to partition resources toward those things that will enhance winter survival. Rapid and abundant top growth becomes secondary, though still important to maintain a photosynthetic factory. Moving to the top of the preparation-priority list is root carbohydrate (starch) and protein storage.

It was the need for adequate fall-stored root reserves that prompted the establishment of the so-called “critical fall period” — the agronomic equivalent of “don’t go there.” The thinking was that alfalfa needed four to six weeks before a killing freeze to build root reserves.

Cutting during this period would result in the plant using the stored reserves for regrowth but without enough growing season left to replenish adequate root carbohydrates for overwintering and spring growth.

All of the fall-cutting considerations that were valid 30 years ago are still valid today. If alfalfa is cut during the critical fall period, it will be at a higher risk for winter injury. However, that risk is much less than it was 30 years ago. Here are some reasons why.

Better varieties: The link between fall dormancy and winterhardiness has largely been broken, meaning that the photosynthetic factory gets built faster after cutting. Furthermore, today’s varieties are selected by imposing aggressive harvest regimes and by cutting plants at all the wrong times (including fall). If you use improved genetics, your chances for winterkill will be less today than years gone by.

Longer growing seasons: Call it climate change if you wish, but the critical fall cutting period has moved back. Both weather data and the USDA Plant Hardiness Zone maps reflect this change. Today’s third week in September was yesteryear’s second week in September. On average, killing frosts and freezes are occurring later. The risk for fall cutting doesn’t actually pertain to calendar date, but rather to growing degree units before a killing freeze of about 24°F. Critical fall periods today start and end later than they did 30 years ago.

Recent results: It’s now common to see farmers cutting alfalfa on just about any day during the month of September. A drive around the countryside easily verifies this fact. Perhaps the stand life is shortened, or there is less yield the next year, but the practice is clearly not the death wish that it once was.

Less risk for fall cutting doesn’t equate to no risk. The basic physiologic changes that occur in the alfalfa plant during fall haven’t changed.

Plant breeders have perhaps found genetics that winterize better and faster or withstand the rigors of winter with less in the tank. Whatever the case, alfalfa plants still prepare for winter as they always have.

Even with improved varieties and changing climatic patterns, there will still be years with early frosts and freezes, open and frigid winters, and springs filled with ice and extreme temperature variation.

Harvesting wet sorghum crops is a challenge Next