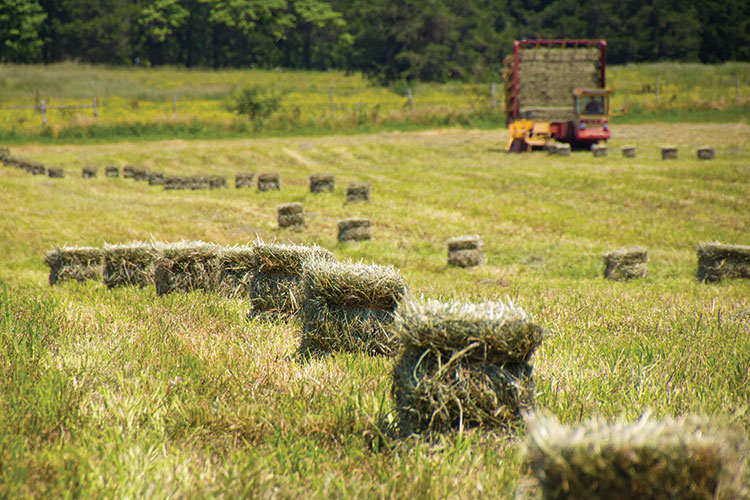 With Mother Nature being as crazy as she’s been the past few years, it makes efficient hay production even more critical. Although many have converted to wrapping large hay packages as a means to make the best of the short baling windows, there’s still the matter of those pesky little dry square bales.

Small square bales can cost more dollars in time and labor than anything else you do on the farm, but they can also bring home a big reward if harvested and stored efficiently. My family knows the heartaches and returns from the small square bale market; we’ve been at it for the last 45 years. These days, there are many excellent options for handling small, two-tie bales. Let’s break them down and hopefully shed some light as to which might be best suited for your operation.

When my family’s commercial haying operation started back in the 70s, there were not many options. Manual labor was the popular choice and that’s how I “cut my teeth” in the hay business. There is nothing in the world wrong with this method, and you can figure out how tough you really are in the top of a barn during the middle of July on a hot Georgia afternoon. We rarely got much hay wet, but at the same time we were limited to 800 bales or so per day.

The next step for us was a pull-type bale wagon, soon followed by a second. These pull-type wagons hauled and stacked 105 bales per load and raised our production to over 1,500 bales per day. A few years later we made the big jump to a self-propelled stack wagon, which is still our preferred choice today. These wagons made it possible for one person to pick up and stack in the barn upwards of 2,500 bales per day. Stack wagons are still one of the most effective ways to get hay out of a field and into a stack. However, the barn or stack needs to be relatively close; too much road travel can eat into productivity.

Other than price (they are expensive, even for a used unit), one of the only weak spots for bale wagons is during load out. If you sell mostly retail hay, it usually means the only way to load a truck is manually. I know there are squeezers that you can grab a section of the stack and load a trailer, but not every trailer is the same size, and this can still lead to some manual labor. However, if getting the bales out of the field with minimal labor is a high priority, then bale wagons are a great choice.

Another option that has been around for decades are bale accumulators and grapples. In today’s small square bale market, the bale accumulator and grapple are probably the most cost-efficient way to get started in the business. New accumulators cost about $10,000 and grapples are around $4,000. There are numerous used models out there for much less. The best thing about this system is you should rarely have to manually handle bales. They can be loaded out of the field to a trailer and then unloaded into the barn by loaders.

When the bales are ready to be sold, they can be picked up again by the grapples and loaded onto trailers. This usually works great and there are a number of different systems on the market to choose from, so you can pick the one that best suits your farm. The downside of this system is the number of pieces of extra equipment needed. To be efficient, you need two loaders, one in the field and one at the barn, with multiple trucks and trailers to haul the bales. It takes multiple people to really run these accumulator crews efficiently, but this approach can get you started at a lower cost and can be adapted to any size operation.

A relative newcomer to the market are bale bundling machines. There are a few different models on the market. These machines can either be pulled behind the baler, pulled by a separate tractor, and are also available as a self-propelled unit.

Bundling machines wrap a strap or twine around different-sized bale bundles ranging from nine to the most popular 21-bale units. The 21 bale stacks are seven bales wide and three high stacked on edge. If you put one stack on top of another, they fit perfectly into a van trailer. For loading dry vans, this system would be at the top of my list. Bundlers have quite a few moving parts and some have an onboard computer, but all have proven to hold up for hundreds of thousands of bales.

A bit on the expensive side, a new pull-type bundling machine can range from $80,000 to $110,000. A pull-type unit can keep up with two balers. You still need loaders in the field and at the barn, along with extra trailers for hauling. All in all, a very expensive option, but in terms of efficiency of both getting bales hauled to the barn and reloaded for delivery, bundlers can pay for themselves in short order.

This article appeared in the August/September 2019 issue of Hay & Forage Grower on page 17.

Get paid for custom work: a lawyer’s tips Previous