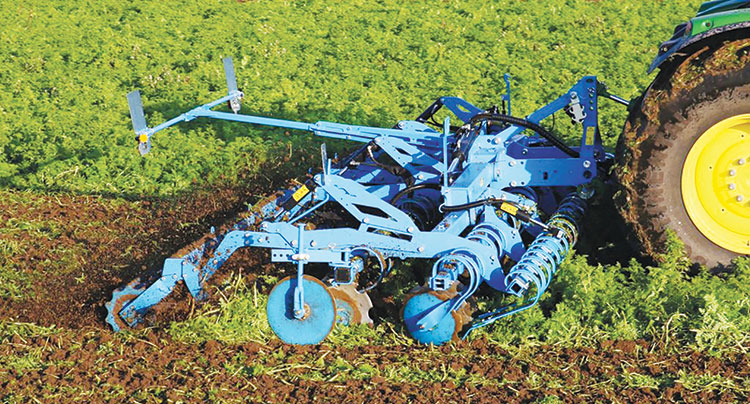 These days, machinery manufacturers are designing equipment that gets the job done faster and with less labor. Tillage equipment is no exception to that trend.

There's no doubt that we live in a fast-paced society. We must have everything right now and even more so have it delivered or picked up for us. It’s becoming this way in the equipment industry as well. Most operations now say that having their parts delivered or direct shipped is a better use of their time rather than making several trips into town to grab some parts.

Today, dealers have more CSRs, or customer service representatives, to help get parts or equipment to a customer faster. I really don’t think that most farmers would pass up the opportunity to go in town and “chew the fat” at the parts counter but, quite frankly, most don’t have enough labor to afford that luxury during busy times in the field.

Crop prices and labor seems to be at the top of everyone’s list of the most challenging things when it comes to farming today. Our qualified labor shortage is partially what is driving the latest big push and design changes of new equipment being offered in North America.

High-speed tillage is not new to the world of agriculture, rather just new to the North American market. This type of tillage has been used as far back as the 1980s in Europe but has really taken off in the 2000s. It’s becoming a vast market with nearly all equipment manufacturers having at least one model in the high-speed disk category. This market has mostly been dominated by the European tillage companies since they have the longest track record in the marketplace.

So, how can a high-speed disk benefit your farm?

Let’s start out by saying what it isn’t — and that is vertical tillage. Yes, they do size crop residue, and you can choose to leave the stubble on top of the ground, but high-speed disks are going to move some dirt. Further, they are more adjustable than a conventional disk.

There are two main reasons why farmers are switching to a high-speed disk — the speed and soil finish.

These tillage tools leave the soil surface smooth and level. The blades hold a consistent angle due to their individual

shanks; the aggressiveness in which they move soil drives the leveling. In some cases, a pass with the field cultivator can be eliminated.

At suggested speeds of 7 to 13 miles per hour, you can really cover some ground, and what you will find in running these machines is that most work better at a higher speed than lower ones. The tillage aggressiveness is amplified with the speed and throws the soil in both directions. Most of these units have a semi-ridged frame, thus filling in any holes or knocking down ridges left by other tillage tools.

Compared with a same-sized conventional disk, you can cover twice the acreage in a day and possibly eliminate an extra pass. This can add up to significant savings, although they take more tractor horsepower per foot than traditional disks. You need about 12 to 15 horsepower per foot to pull the disks at the proper speed and depth.

There are two ways you can look at using these disks: Cover more acres with a similar-sized unit as your current one or cover the same number of acres with a much smaller unit.

We have farmers covering more acres in a day with a 20-foot high-speed disk compared to their traditional 32-foot tandem disk. Likewise, you can use a 30-foot high-speed disk and cover the acreage of two, 32-foot tandem disks in the same amount of time. That also means only one employee to do the same work as two. For some farmers, this benefit of fewer employees can be the most important factor.

Be sure to do your research when it comes to selecting brands and sizes. There are extreme differences and requirements from your tractor. Some companies have gotten into the market fast and their disks will have less of an operating track record.

This article appeared in the November 2019 issue of Hay & Forage Grower on page 28.

Fifty years of haying progress Next