The hay export business has never been one for the weak of heart, but that’s been especially true over the past couple of years.

“Overall, things have been kind of okay since the Chinese tariffs were imposed,” said John Szczepanski, director of the U.S. Forage Export Council (USFEC), in his comments at the National Hay Association’s 124th Annual Convention held in Acme, Mich., last month.

In describing the export situation in 2019, Szczepanski noted that U.S. hay exports are on pace for about 5 percent growth over 2018. That’s despite China being down by 30 percent. 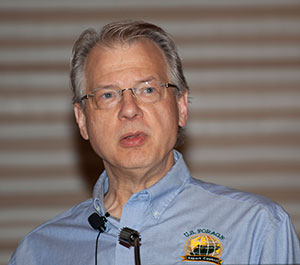 “The loss in that market (China) has been mitigated by growth in other markets, especially in the Middle East,” Szczepanski said. “Of course, that is based on USDA numbers through July, but things seem to change from month to month.”

Saudi Arabia continues to export increasing amounts of hay, but it is largely through their own U.S.-based companies that produce, process, and purchase hay from U.S. farmers. Though farmers benefit, the Saudi’s U.S. operations in some ways become a competitor of our domestic export companies.

Comparing 2016 hay export values to 2019, Szczepanski noted that we are still dealing with a $1.2 billion pie.

Hay exports to Japan currently account for about 40 percent of total exports and have been up in 2019. However, some of that growth may be short lived.

“Japan always has paid more for alfalfa than China, but in recent years there’s been more parity,” Szczepanski said. “China is buying less alfalfa but is now paying comparable prices to Japan.”

Addressing the Chinese tariffs on U.S. alfalfa, Szczepanski noted that when they were first applied last year, tariffs went from 7 to 32 percent. “In recent days, we’ve seen news that China is stepping away from the tariffs on alfalfa,” he said. “We just don’t know. Depending on what you read and the day of the week, things are constantly changing. Exporters are both optimistic and cautious,” he added.

Since the tariffs have been applied, Szczepanski said that the Chinese have looked to other countries for their supplies. “They may also be figuring out ways to just not feed as much alfalfa,” said the director of USFEC, which is made up of 34 export companies that account for about 85 percent of the U.S.’s hay export volume.

“Finding ways to feed dairy cows without using U.S. alfalfa is really significant because it will have a long-term impact on the market,” Szczepanski said. “We’re hearing in some cases that former Chinese customers who have made changes to get by without U.S. alfalfa have come to the conclusion that they can live with these changes going forward. Things won’t bounce back. Our exporters have also made plans and adjustments that don’t include China,” he added.

Szczepanski said that one of the points that he has to make to legislators is that trade barriers like tariffs not only hurt farmers but maybe in a larger way hurt our export companies that have invested millions of dollars in equipment and inventory to serve the export industry.

“One of our exporters made the point that China is making tremendous port investments around the world,” Szczepanski noted. “A lot of this investment is in places where hay is being grown and supplied to China.”

“Another current issue is that we need efficient U.S. ports with upgraded technologies and improved automation,” Szczepanski said. “Dock workers are pushing back on such initiatives, and it’s hurting our industry. It’s more difficult to sell our advantages for reliability if our dock systems are slow and outdated.”

Through the Agricultural Trade Promotion Program (ATP), USFEC applied for $200,000 in grant funding to develop new hay markets. The ATP funding was initiated by the Trump administration to help offset the impact of additional trade tariffs.

USFEC only received $89,000 through ATP, and the funds were earmarked for doing dairy feeding trials in India. This is a market that is very young but with great potential, Szczepanski explained. The money will be used in 2020.

“We’re dealing with a lot of hurdles in India, but there’s also a lot of potential,” Szczepanski said. “There are opportunities if we can meet in the middle. We need to show them that if cows are fed good quality alfalfa, they will respond with more milk."

Currently, India requires that imported hay be heat treated. “That’s a deal breaker for us,” Szczepanski said. “Technically, the Indian market is open, but the current reality is that it’s not. We have to work on getting that requirement removed,” he concluded.