Hoosier hay from the land of grain 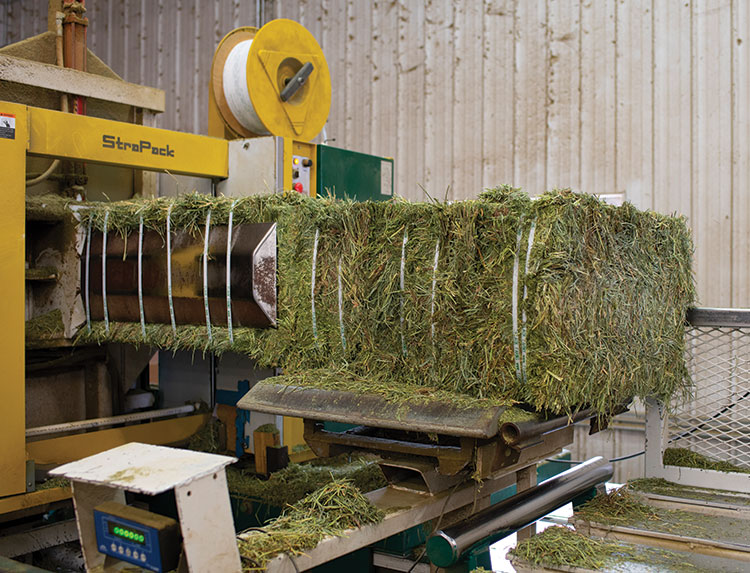 Flack Farms purchased a used Steffen Bale Conversion System in 2014 to help them realize the premiums available in the small bale market.

It was still wet . . . really wet in northeast Indiana when the calendar turned to June. As the Google Maps lady directed me past grain bins and still unplanted fields of last year’s corn and soybeans, I began to question the possibility of actually being guided to a hay farm in this row crop epicenter. As it turned out, Ms. Google was on her game that day.

Steve Flack competes to rent hundreds of acres of prime Indiana farmland per year, but he’s in the market to grow hay, not corn and soybeans. Flack, along with his wife, Lisa, and their son, Austin, operate Flack Farms Inc., near North Manchester. The family has been in the hay business for over 20 years. Both graduates of Purdue University, Steve and Lisa initially worked in the crop protection industry. These days, they ship out an average of five semi-loads of hay per week.

It all started innocently enough.

“We had a small sheep flock and figured we could make our own hay and sell some on the side,” Flack explained. “Initially, we made small square bales, but then we moved to large squares to improve efficiency and meet the demands of a growing customer base.”

Through the years, Flack Farms has progressively grown and diversified. But one change essentially reshaped the business.

“In 2014, we saw that a used Steffen Bale Conversion System was being auctioned in South Dakota,” Flack said. “We decided that this would give us the opportunity to still make big bales but also be players and capitalize on the premiums offered in the small bale market. Luckily, we placed the last bid,” he added.

The Steffen Bale Conversion System takes large square bales and cuts them down to smaller designated sizes and weights. Flacks now “make hay” year-round in a pole building that houses the machine.

The small square bales come out of the processor, bound with plastic straps, and are mechanically pushed to a table where they can be picked up and stacked with a hay grapple. A bale squeeze is used to load the bales onto a wrapping machine where they are bound with plastic wrap and then placed on a pallet for shipping. 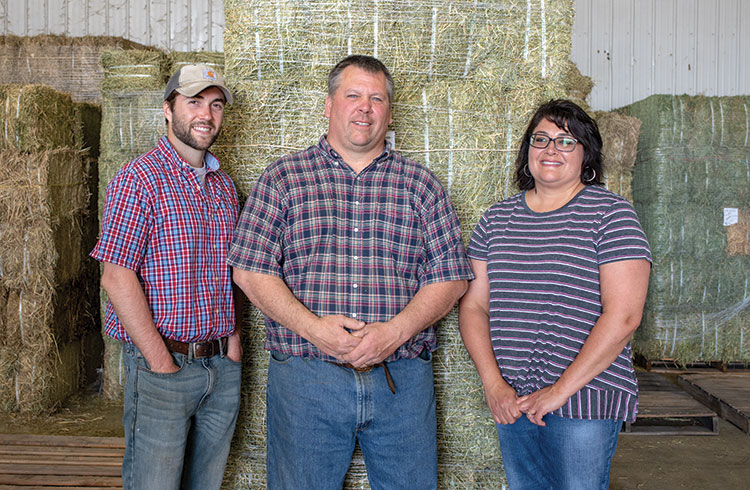 Austin, Steve, and Lisa Flack stand in front of a net-wrapped bundle of small square bales that are ready for shipment.

“Before we purchased the bale processor, our business was mostly with dairy farms purchasing large square bales,” Flack said. “Today, we market primarily to the equine and retail industries. We can mix and match different quality hays to the same retailer if that’s what they want. Most of the lower quality hay is sold as large square bales,” he added.

Lisa heads up the marketing and bookkeeping duties while Austin is involved in all aspects of the business. The farm ships hay to clients in over a dozen different states and owns four semi-tractors along with seven trailers of various types.

Flack explained that a wrapped pallet of hay weighs about 1,800 pounds, and they are able to get 22 tons on a trailer load. But baled hay isn’t the only commodity that leaves the farm.

“We operate a Haybuster tub grinder and ship out ground hay to mostly feedlots and heifer growers,” Flack said. “We also sell straw, either in large or small bales, and several types of wood shavings for bedding.”

Not just a processor

Though the bale processor is the focal point of the operation, Flacks are also in the business of making hay on 500 to 700 acres of rented cropland that is within 20 miles of the home farm. Most of their fields are alfalfa or alfalfa-orchardgrass mixtures. Any additional needed hay is sourced from growers in the West and Midwest. Through the years, Flack has developed permanent relationships with his hay suppliers to ensure customer demands are met.

The remainder of the summer was also a challenge for the haymakers, being characterized by dry conditions and slow plant regrowth during July and August, inaccurate weather forecasts, and a lot of heavy dew and high humidity days. 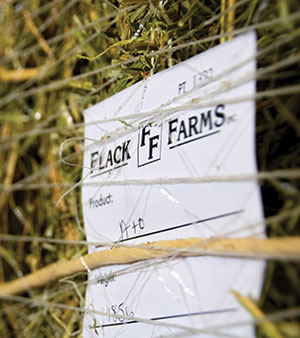 A wrapped pallet of small hay bales weighs approximately 1,800 pounds. Flack Farms also processes large square straw bales.
“We’ll need to source more high-quality hay this year than usual,” the Hoosier hay farmer explained. “A lot of winterkill in the Midwest will make all types of hay in shorter supply.” In the future, Flacks plan to expand their hay base significantly to include timothy acres. They are also working to create more backhaul opportunities for their trucks. This includes bringing back fresh produce to the Midwest from the South.

For some farmers, staying in step with the neighbors is a part of what motivates them to success. For others, like the Flacks, taking the road less traveled and being different than their row crop neighbors suits them just fine. They are among the Midwest minority who prefer bales to bushels.

This article appeared in the November 2019 issue of Hay & Forage Grower on pages 26 and 27.

In the valley of green gold Next

A passion for farming and ryegrass baleage Previous