All considered, a great year for hay exports 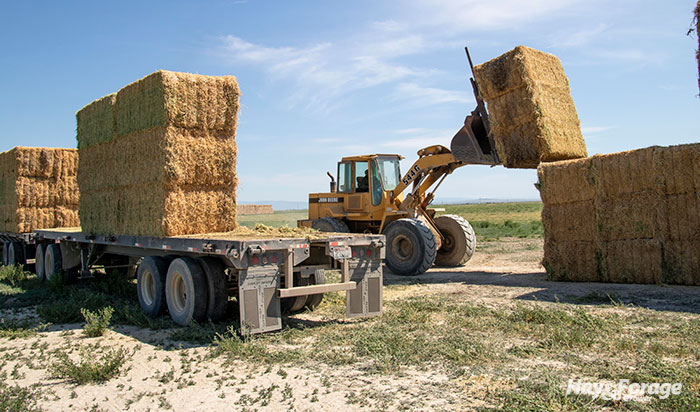 For the second time in three years, total U.S. hay exports in 2019 eclipsed 4 million metric tons (MT). This was accomplished despite the flurry of trade battles that waged on and off during the past year.

The USDA Foreign Agricultural Service (FAS) pegged 2019 total alfalfa and other hay (mostly grass) exports from the U.S. at almost 4.1 million MT, just shy of the 2017 record of 4.2 million MT. The past year’s total hay exports were 4.5% greater than 2018’s final tally. 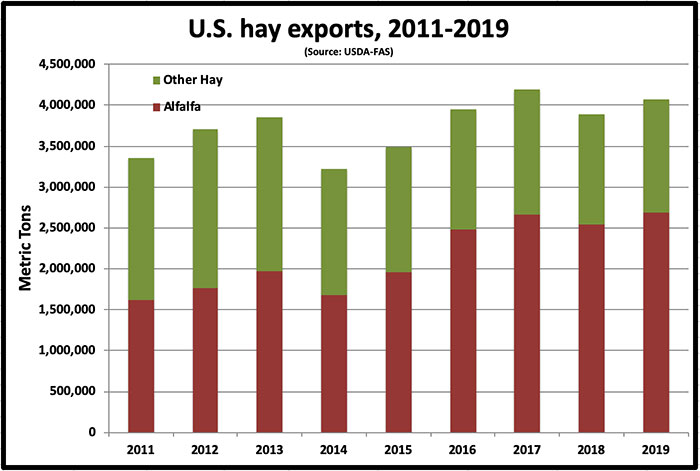 Alfalfa hay exports to all trade partners in 2019 totaled a record 2.7 million MT, just 21,000 MT above the previous high, which occurred in 2017. Alfalfa exports this past year exceeded 2018, another tariff-riddled year, by 5.5%.

Even with imposed tariffs that were 25% higher than normal for much of the year, China still holds down leading alfalfa trade partner status. In 2019, the country imported 865,393 MT of U.S. alfalfa (see graph below).

Japan’s alfalfa hay import total of 663,994 MT was 14.2% higher than 2018 and was that country’s largest amount of U.S. alfalfa purchased since 2009. The past year marked the fifth consecutive year of higher U.S. alfalfa exports to Japan.

For several years, we have heard reports of a Saudi phase out of alfalfa production to conserve water. Although that has occurred to some extent, it apparently isn’t happening as rapidly as was expected. Even so, we need to keep in mind that as recently as 2014 the Saudis were essentially nonplayers in the U.S. alfalfa export market. 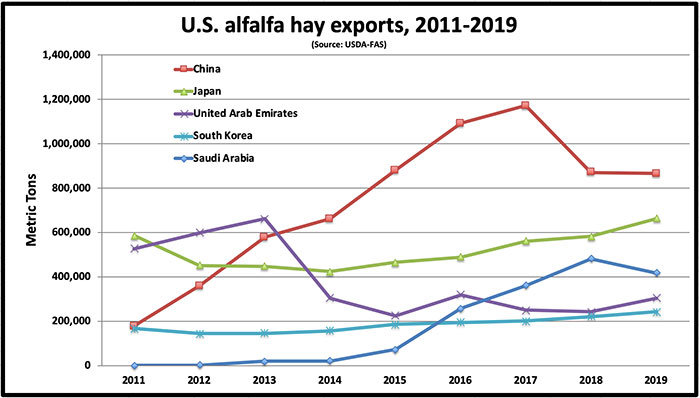 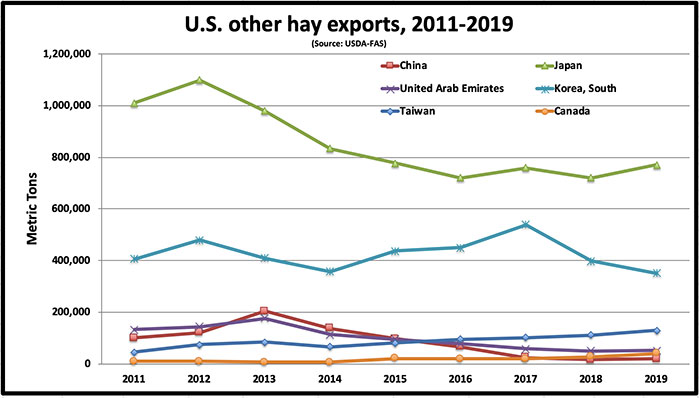 Total hay exports exceeded 4 million MT for only the second time in history. Given the trade hurdles imposed by tariffs during 2019, total U.S. alfalfa exports finished the year much higher than many industry analysts expected.

In the seven Western states of Arizona, California, Idaho, Nevada, Oregon, Utah, and Washington, hay exports play a much larger role in impacting both markets and prices. According to Dan Putnam, University of California forage extension specialist, hay exports make up about 41% of the grass hay production and 17% of the total alfalfa production in those combined states.

Hay prices down slightly from a year ago Previous