Be ready with the nitrogen for grass fields 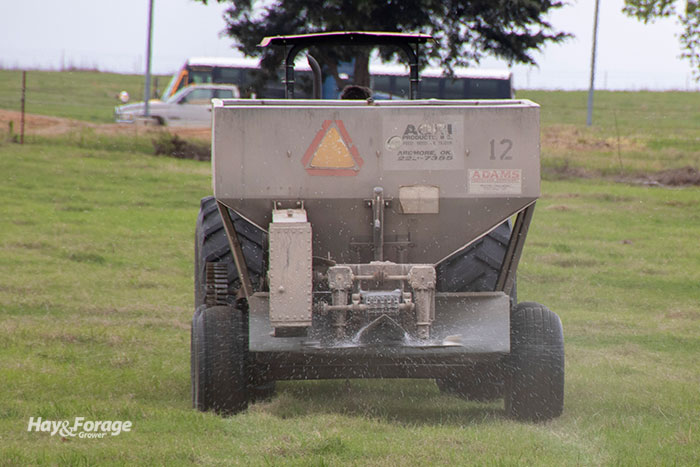 As temperatures warm and cool-season perennial grasses begin growing, be ready with the nitrogen fertilizer.

Exactly how much nitrogen is needed will depend on whether the field is hay or grazed, how much nitrogen was applied in the fall, nitrogen fertilizer price compared to hay value, and the growing conditions since last fall.

According to Kansas State University (KSU) extension specialists, normal fertilization rates for established tall fescue and smooth bromegrass hayfields are 90 to 120 pounds per acre of actual nitrogen, or about 30 pounds of nitrogen per ton of expected yield.

Based on Kansas State research, grass yields can more than double when nitrogen fertilizer is applied compared to a no-nitrogen production approach.

In addition to improved yields, added nitrogen will also boost grass protein concentrations, assuming a timely harvest is made. If high-quality hay is the desired end product, the KSU extension specialists suggest pushing nitrogen fertilizer rates to the high end of the recommended range.

In Kansas, nitrogen fertilizer can be applied either in the fall or the early spring. Most hay growers apply their needed nitrogen in the spring, but KSU research trials have shown that applying all of the nitrogen in the fall will often result in slightly higher yields but marginally lower protein levels. Fall applications of nitrogen and phosphorus stimulate root growth and produce more tiller buds, resulting in more stems the following spring.

In one KSU study, smooth bromegrass responded to spring applications as late as April without effects on dry matter yield and with significantly greater crude protein levels than fall applications.

Under normal conditions, if tall fescue and smooth bromegrass pastures are grazed in both spring and fall, apply about 100 pounds of actual nitrogen per acre. Put 60% of that total on in the winter or early spring and 40% of the nitrogen, along with any needed phosphorus and potassium, in late August or early September.

Although nitrogen is always considered the key nutrient for optimum grass production, the KSU extension specialists also remind growers not to forget about sulfur.

Sulfur deficiency will cause a general reduction in forage production long before it results in visual deficiency symptoms. A sulfur application to a tall fescue or smooth bromegrass pasture or hayfield that is deficient can result in forage yield boosts of up to 500 to 800 pounds per acre.

Sulfur is taken up by plants as sulfate. If a sulfur application is needed to correct a deficiency in a growing crop, use a sulfate source such as ammonium sulfate or gypsum.

Elemental sulfur sources can be used if applied far enough in advance of crop uptake needs to allow soil organisms to oxidize the sulfur into sulfate. This can take weeks to months, depending on soil temperature and moisture.

Poor baleage fermentation can lead to botulism Next