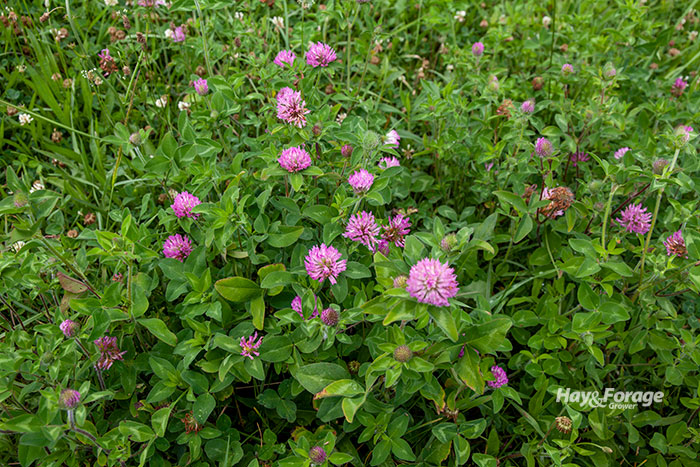 Tall fescue gained popularity in the 1940s and 1950s, but that was before farmers knew about its potential for toxicity.

Infected with endophytes that produce toxic ergot alkaloids, tall fescue can reduce average daily gains in calves; fertility, conception, and delivery rates in breeding stock; and cause heat stress and other physical ailments in a herd. The good news is that there are several preventative methods for farmers to mitigate what is commonly referred to as fescue toxicosis.

University of Kentucky Extension Forage Specialist Ray Smith was recently featured in the Kentucky Forage News electronic newsletter where he shared research results and options for farmers with toxic tall fescue in their grazing pastures.

Cattle that are on toxic tall fescue pastures often suffer from constricted blood vessels. “Red clover is probably the best vasodilator there is for cattle on toxic fescue,” Smith writes. He notes that red clover contains high levels of isoflavone biochanin A compounds, which have been shown through research to be responsible for enlarging blood vessels and helping to counteract the negative impacts of toxic tall fescue. These compounds can also be found in white clover at lower levels. Of course, any pasture legume will help to dilute the intake of toxic tall fescue.

Research conducted at the University of Tennessee indicates that toxic tall fescue can begin to affect grazing animals when it accounts for 20% of the pasture’s plant population. Overseeding pastures with red clover is one of many ways to mitigate levels of toxic tall fescue in grazing pastures. However, it can be difficult to establish and maintain a stand of red clover, especially with heavy grazing or during a drought.

“If you have a good stand of toxic tall fescue, especially if it’s on sloping ground prone to erosion, then I would leave it and add an improved variety of red clover,” Smith advises. “Frost seed red clover every other year and use rotational grazing to help keep the red clover in the stand. You might also add a good ladino white clover, too, but at a low rate since it can sometimes overtake a stand,” he adds.

In addition to legumes, preventing seedheads from maturing and being readily available for cattle to consume can greatly reduce the toxicity of fescue in grazing pastures. Ergot alkaloids concentrate in the seedheads of fescue plants. Treating endophyte-infected fescue with metsulfuron-methyl, the active ingredient in Chaparral herbicide, can suppress the emergence of seedheads.

Where pastures need to be killed and re-established because of poor productivity, Smith recommends seeding a novel endophyte tall fescue variety, which does not produce the toxic ergot alkaloids.

A novel endophyte tall fescue variety was first developed by Joe Bouton from the University of Georgia and Gary Latch from Ag-Research Limited in New Zealand. Now there are many such varieties on the market. They are not quite as hardy or as persistent as toxic tall fescue, but they do eliminate the risk of toxicosis. With well-managed grazing and rest periods, Smith has observed novel endophyte farm pastures lasting for 10 or more years in several southern states.

Converting pastures or fields from toxic tall fescue is usually done in one of two ways. The first technique is to spray-smother-spray. Here, farmers spray herbicide during spring to kill toxic fescue, plant a smother crop during summer, then spray again in the fall to take care of any remaining fescue. The second technique involves two rounds of spraying and no smother crop. The second herbicide application is recommended to treat any late developing plants.

The Alliance for Grasslands Renewal recommends converting 25% of your pastures to toxin-free fescue as a start. This tactic allows you to move herds to a toxin-free grazing area at key times when temperatures and toxin levels are at their peak, and the risk for toxicosis is highest. This strategy also allows for you to spread transitioning labor and resource costs over a longer period of time.

Cutting it close Next

There's no such thing as a free nitrogen lunch Previous