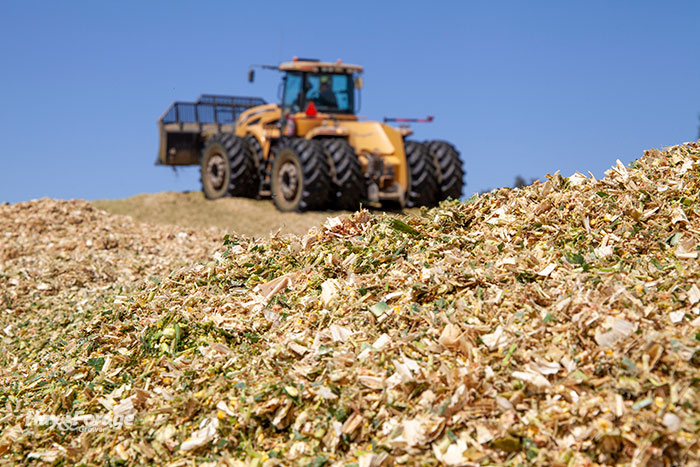 As with planting corn or drying hay, so much of the daily grind of growing and harvesting crops is as much an art as it is a science. Nowhere is this truer than when building a silage pile or packing a bunker. These are learned skills guided by years of research results and practical experience.

The hard truth remains that a growing season’s worth of good decisions can quickly be negated during the silage harvest and storage phases when both dry matter (yield) and forage quality can be lost.

Becky Arnold, a territory business manager for Lallemand Animal Nutrition, noted that there’s a distinct difference between shrink and dry matter (DM) loss in a silage pile. She was a featured speaker in the “Silage for Beef Cattle” webinar series sponsored by the University of Nebraska-Lincoln, Iowa State University, and Lallemand, offering her thoughts on properly constructing a silage pile.

“Shrink is simply tons in versus tons out,” Arnold said. “This doesn’t really tell us a whole lot. For example, a silage pile can actually gain 1 to 2 percentage points of moisture just from plant cell respiration during the ensiling process. However, we also know that some nutrients are lost, converted, or consumed during fermentation,” she added.

Nutrient losses can be 1.5% to 6% depending on the efficiency of fermentation. There can also be 1% or more nutrient losses in effluent or seepage runoff, 3% to 24% in surface spoilage, and 1% to 15% in feedout losses. Arnold noted that the average DM loss for a well-managed silage pile is about 15%.

“A ton of good feed weighs the same as a ton of bad feed,” Arnold proclaimed. “Animal performance from feeding the two feeds is what will differ.”

The first consideration when building a silage pile is location. Select an elevated site that will allow rain, snow, and seepage to drain away from the pile. Also, make sure the pile is at least 1,000 feet from any existing wells to avoid seepage contamination.

Locate the pile in a place that is convenient for the feed mixer. This saves time and reduces wear and tear on machinery. Allow enough space around the pile to maneuver equipment. Arnold recommended at least 15 feet.

“Where piles are being constructed on bare soil, make sure the base is as firm as possible,” Arnold said. “Introducing dust, soil, and rocks into the pile is never desirable, regardless of base type, but it becomes more of a challenge when being built on a porous base. When building a pile, put a ‘carpet’ of silage across the area where trucks will be dumping so that the tractor blade won’t be prone to dig into the soil surface,” she added.

Many factors influence pack density, which is directly related to feed quality and animal performance. These factors include: rate of delivery, moisture content, particle size, packing layer thickness, slope of sides, length and slope of fill ramp, wall height, and numerous packing tractor variables, including the weight, number, and the skill of the operator.

Arnold noted that every truckload of silage needs to be spread out and packed, including the first load. An important means to help ensure an adequate pack density is to keep the packing layer thickness to 6 inches or less. The silage specialist was adamant on this point. Keeping layers at 6 inches or less will also help to lower silage porosity, reducing oxygen infiltration at the face and over the surface.

“Packing tractor weight also plays an important role in achieving packs with high densities and low porosities,” Arnold noted. “The ‘800 Rule’ is often used to determine the correct amount of tractor weight needed for the weight of silage being delivered to the pile per hour.” She presented the following example:

Arnold recognized that sometimes space or equipment is limited, making it difficult to meet the criteria of the 800 Rule. “In these cases, packing thin layers becomes more critical and sometimes trucks simply have to be delayed for several minutes before they dump,” she said.

From a shape perspective, Arnold recommended using the progressive wedge technique for building a pile. She noted that pile height needs to be uniform across the top as it’s viewed at a distance from the side.

Maintaining a proper side slope is important not only from a safety perspective, but also to achieve good pack density and to ensure the tires and plastic are tight against the surface of the pile.

“Keep side slopes to something less than 30%,” Arnold said. She added, “Piles that are too flat and shallow are also problematic because a higher percentage of the surface area is vulnerable to oxygen penetration relative to the total volume of the pile.”

Arnold pointed out that at the same axle load, a wider tire compacts to the same depth as a narrower tire, but less surface compaction occurs. For this reason, she prefers narrower tire widths on packing tractors. However, she does favor finishing a pile off by using a tracked tractor, which smooths the surface and helps eliminate air gaps between the pile and covering.

Covering piles and bunkers is critical. Arnold cited research from Kansas State University showing that in an uncovered pile or bunker almost 75% of the dry matter is lost in the top 10 inches. That compares to 10% in a properly covered structure. In addition, feed digestibility was 37% for the uncovered silage and 72% for the covered.

“Research shows that when you mix spoiled feed with good feed, livestock performance is going to suffer in terms of both gain and milk production,” Arnold emphasized.

Finally, Arnold was emphatic about being safe when building and working around silage piles and bunkers. She credited the late Keith Bolsen with raising awareness to the dangers inherent with these silage storage structures.

Like a Ferrari, peak silage performance requires protection Next

Facing the facts of the face Previous