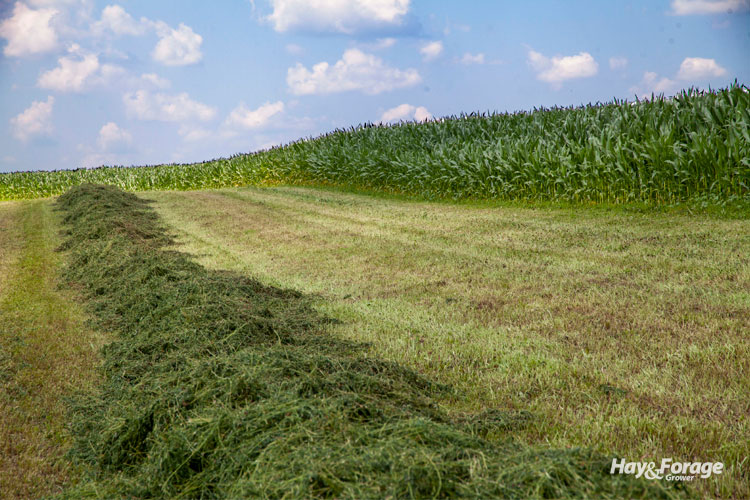 Alfalfa provides plenty of benefits during its productive years in a crop rotation. But alfalfa is also the gift that keeps on giving.

“There are many benefits to corn when it is planted after alfalfa, including greater yield, a reduced nitrogen requirement from fertilizer or manure, and reduced pest pressure compared to when corn is planted after other crops,” notes Jeff Coulter, an extension corn agronomist at the University of Minnesota.

In a recent Minnesota Crop News blog, Coulter cites research from Wisconsin and Iowa showing grain yields of first-year corn following alfalfa was as much as 8% higher than when corn followed soybeans, and 9% to 18% higher compared to continuous corn.

The benefits of alfalfa in a crop rotation don’t stop with first-year corn, either. The research also documented a 6% to 8% yield bump for second-year corn after alfalfa compared to continuous corn.

Fall termination of alfalfa allows for faster drying and warming of soil in the spring, which enables earlier corn planting. Killing alfalfa stands in the fall also reduces field operations in the spring.

Although fall termination of alfalfa is preferred, there are some downsides. It can result in less cover to protect against soil erosion during the winter, and it does not provide the option of assessing marginal stands to determine whether alfalfa could be productive for another year.

Coulter notes that alfalfa can be terminated using tillage, herbicides, or a combination of both.

“Tillage implements such as a chisel plow with overlapping sweeps or a moldboard plow, which completely cuts off all of the alfalfa roots, are effective at terminating alfalfa, but may not be suitable for all fields due to concerns about soil erosion,” the agronomist says. “Tillage implements that do not completely cut off all alfalfa roots will be unable to provide complete alfalfa termination unless an herbicide is applied before tillage.”

Any fall herbicide application needs to occur before the first killing freeze, which is defined as 28°F or lower for several hours. Also, there must be at least 4 to 6 inches of alfalfa regrowth to ensure effective translocation of the herbicide to the roots.

Fall tillage after an herbicide application can usually occur three to four days following the spray treatment, but farmers are encouraged to check the herbicide label for specific recommendations.

“A highly effective herbicide option for fall termination of alfalfa is 2,4-D amine or ester alone or tank-mixed with a dicamba product,” Coulter notes. “If grasses are present with alfalfa, a good option is to tank-mix glyphosate with 2,4-D.”

Keep more bale for your buck Next