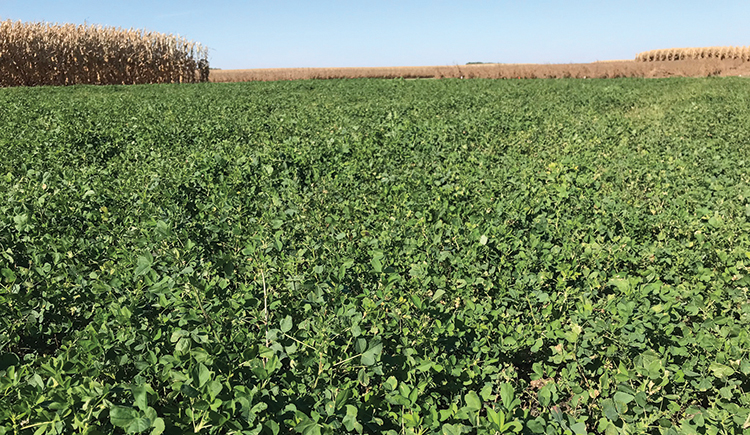 First step in understanding the effects of dairy manure on yield in a corn-alfalfa rotation — as well as on soil microbial communities — has been made through research funded by the National Alfalfa & Forage Alliance’s Alfalfa Checkoff.

“I hope we can bring some new knowledge on the impact of manure on soil health,” said Joshua Gamble, research agronomist at USDA-ARS Plant Science Research Unit in St. Paul, Minn. He and Sarah Castle, an ARS soil microbiologist, established corn-alfalfa research plots on three Minnesota sites in the spring of 2019, including one-time raw dairy manure slurry applications. They are also studying the alfalfa rotation effect, in which the legume fixes nitrogen that benefits subsequent crops, and how or what it may contribute to soil microbial communities.

At each field site, treatments included the following:

Soil cores were taken for soil chemical and biological analyses, and yields were measured for each crop.

The one year of data showed that high manure rates increased the yield of first-year corn following alfalfa (totaling 186 bushels per acre at one location). Second-year corn yields were lower with all fertility treatments (see graph). 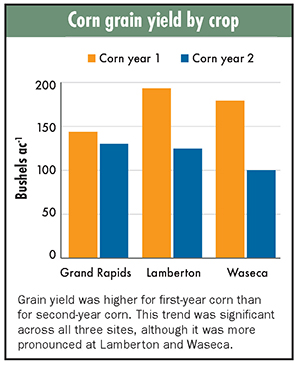 “Previous studies have shown alfalfa improves subsequent corn yields, especially in Year 1 of the rotation into corn,” Gamble said. “Except when you talk with producers, they don’t always see that. One of the things we hope to get at with this soil microbiological work is why that yield benefit is there in some years, and why it is not so much in other years,” he added.

Gamble continued, “Hopefully, we have good soil data and microbiological data to evaluate and ask if it is a fertility thing or is there something else that is causing this decline. Maybe there’s a change in the microbiological community by Year 2 and the yields are just lower because of this change.”

Checkoff research showed spring manure applications brought a limited effect on the composition and diversity of microbial communities, and that high manure rates significantly impacted soil fungal, but not bacterial, community compositions. However, Gamble pointed out, that was from just one year of data. With ARS funding, he, Castle, and other ARS collaborators from Idaho, Pennsylvania, Texas, and Wisconsin expanded the manure project and formed the Dairy Agroecosystem Working Group (DAWG). One of DAWG’s goals is to determine the long-term effects of a one-time manure application.

The researchers were intrigued by previous ARS work in Idaho, showing manure applications provide a “legacy effect” in soil and can cause unusual spikes in nitrogen availability as well as other phenomena not yet explained. “Their (Idaho) findings suggest that even short-term or single manure applications can influence soil properties, and likely soil microbes, to the benefit of crops for years following application,” Gamble wrote in his research report. This continuing research, he added, may help answer how long manure-application benefits should last, and how often manure should be applied or alfalfa be included in a rotation to maximize those benefits.

“If we see these benefits in manure and can quantify them and understand how long they last, perhaps there is more economic value to that manure,” Gamble said. “Dairy producers are most likely applying manure every year. They have manure and need to use it. But I also think there is a benefit here for grain producers who don’t have livestock. It might make sense to ship it a little further if a grain producer knows he will get a soil health benefit that lasts five years, for example. That way it might help both the dairy farmer and the grain producer.”

For the complete report, visit www.alfalfa.org.

PROJECT RESULTSThis article appeared in the January 2021 issue of Hay & Forage Grower on pages 16 and 17.