Don’t get bold if your hay has mold

By Jeff Lehmkuhler
The author is an extension beef specialist with the University of Kentucky. 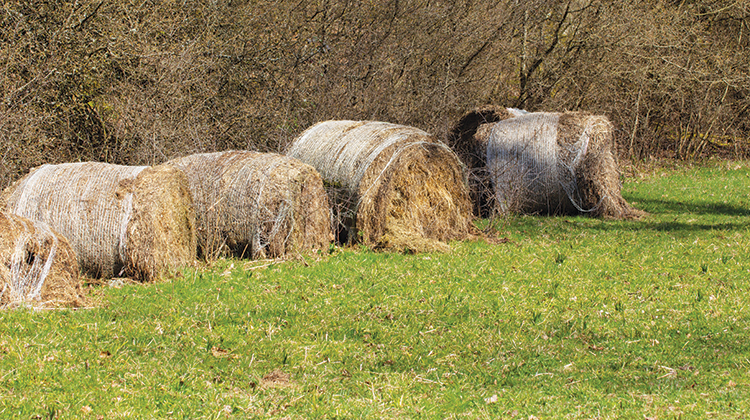 Forage quality test results can tell us a lot about a forage. However, we also need to consider aspects that could impact hay during storage. Weather changes have provided producers in our region opportunities to cut hay later in the fall. Shorter day length and heavy dews can make drying a challenge. If hay is baled with greater moisture than ideal, the consequences can be severe.

Indulge me a bit while I share a couple of recent farm situations. The first involves alfalfa hay — the “Queen of Forages.” Not many beef operations produce alfalfa or alfalfa-grass mix hay for beef cattle in the Commonwealth of Kentucky. This operation had weaned calves and was providing grass hay and a grain supplement. A spot check of weight taken a month postweaning revealed calves averaged 569 pounds with an average daily gain of 3.2 pounds since weaning.

These calves were eating the hay aggressively, and some of the weight gain was a result of gut fill. Regardless, the calves had good performance up to this point. Exactly one week later, weights were taken again. On average, the calves weighed 548 pounds. They had lost an average of 21 pounds in seven days! Yes, this would be an average daily loss of 3 pounds per day. Several calves were coughing excessively; one calf was showing symptoms of severe respiratory distress.

First, I checked the waterers, as severe weight loss can be a result of fouled water and reduced intake. The waterers were relatively clean.

Next, I looked at the hay.

This was alfalfa hay, not the grass hay that was offered the first four weeks. In September, a last cutting of alfalfa was baled. However, weather conditions changed and forced the alfalfa to be baled before it was completely dry. The farm ran out of the grass hay and fed this alfalfa hay, which now was about six weeks postbaling. There was excessive mold, and some areas were black.

Older literature can be found related to farmer’s lung disease, a disorder associated with livestock managers who are exposed to moldy hay and the inhalation of mold spores. Organisms believed to be associated with this disorder are reported to be Actinomyces bacteria and fungi. The disorder impairs the lungs and can lead to pneumonia-like conditions. Storing feedstuffs that are too wet has been shown to accelerate the growth of these microbes, and disturbance of the feeds launches a number of these microorganisms into the air.

These microbes can be inhaled, leading to hypersensitivity pneumonitis, which makes it difficult to breath. Similar symptoms were observed in these calves. The calves were moved to stockpiled forage, away from the hay, and health improved.

Calves wouldn’t eat
The second farm situation involved a cereal crop forage harvested for hay. When cut at boot stage, cereal crop forages, generally rye in this area, can be decent quality. Rye can be tricky, though, as it matures early, and fields that are poorly drained make it a challenge to harvest rye in early spring.

The farm manager thought the hay would be in the 10% to 12% protein range and mid-50s for total digestible nutrients (TDN), but he had not tested it. This hay was being fed to high-risk, light-weight, backgrounding calves. We visited the operation due to issues of high morbidity and mortality rates. The concern from the manager was calves not wanting to eat.

After getting the forage test results, the hay was notably lower in quality than expected, being only 7% crude protein and in the low 50s for TDN. This category of animal is stressed from weaning, shipping, and commingling and will often have low intakes the first few days after arrival. Light-weight calves are also in a lean phase of growth, needing sufficient protein for muscle accretion.

The recommended total dietary protein content for these calves with normal intake would be 14% to 16%. Formulating a complete diet and assuming hay is 11% protein when it’s actually only 7% can lead to a calf being shorted by 30% to 35% of its daily protein needs. This deficiency can reduce immune response and lower performance.

Upon inspection of the rye hay, it was clearly baled mature and too wet. Some bales heated and caramelized, which would lower protein and energy availability. Other bales were moldy and had black areas within the bales. When managing stressed, light-weight calves, it is critical they are not forced to eat moldy forages. Spoiled feeds have been shown to reduce intakes of cattle. Calves of this type need soft-leaved second or third cutting grass hay that is mold free.

More evidence
Wet hay or wet feed placed in storage can provide an environment for growth fungi, including Aspergillus, Fusarium, and Penicillium. Production of mycotoxins from the growth of these organisms is of concern. Mycotoxins can lead to organ damage, weakened or suppressed immune systems, impaired reproduction, respiratory stress, and, in severe cases, death.

In a field case, young, male Holstein calves that consumed aflatoxin-contaminated feeds resulted in 17% mortality rates and enhanced prevalence of Bovine Viral Diarrhea (BVD) virus in affected calves. Once a feed free of mycotoxins was provided, no further cases were noted. The last thing we want in newly received feeder calves in a backgrounding operation is a suppressed immune system from mycotoxin exposure.

A case study in Missouri involved second cutting alfalfa-orchardgrass hay, which was baled too wet, being offered to cattle. It resulted in 18 out of the 29 animals developing liver disease. This was thought to be the result of mycotoxins produced from the Aspergillus found in the forage.

In another field case, a retrospective investigation of bulls managed at a Finnish bull stud revealed a link between a significant reduction in semen quality, which included poor motility and larger numbers of abnormal sperm cells for a period of five months, with being fed hay contaminated with Fusarium mycotoxins.
There is no single test that tells us the full picture, but each piece of information helps to evaluate the feeding value of a feedstuff. Often, we rely solely on proximate analysis results or those from near infrared reflectance spectroscopy (NIRS) for nutrient concentrations to develop our feeding program. However, it’s also worth the extra effort and time to evaluate hay for mold, especially if it was baled wetter than is recommended.

Consider having moldy hay tested for mycotoxins. The best approach is to reduce the risk of mold growth by baling at the appropriate moisture. Also, consider preservatives as an option to limit mold growth. Here is to hoping all your hay is put up in ideal conditions and mold free! Have a great 2021 hay production year, and may your barns be full of quality forage.

This article appeared in the February 2021 issue of Hay & Forage Grower on page 30.

When hay doesn’t dry, you want to cry Next