January hay prices were all stronger

The average price of U.S. alfalfa hay in January edged up $2 per ton, following a previous $2 per ton bump in December. The $171 per ton January price was $2 per ton above one year ago. Supreme and Premium alfalfa hay prices improved by $3 per ton to $206.

The latest USDA Agricultural Prices report pegged other hay (mostly grass) at $137 per ton, $3 higher than the previous month and equal to last year’s January price. 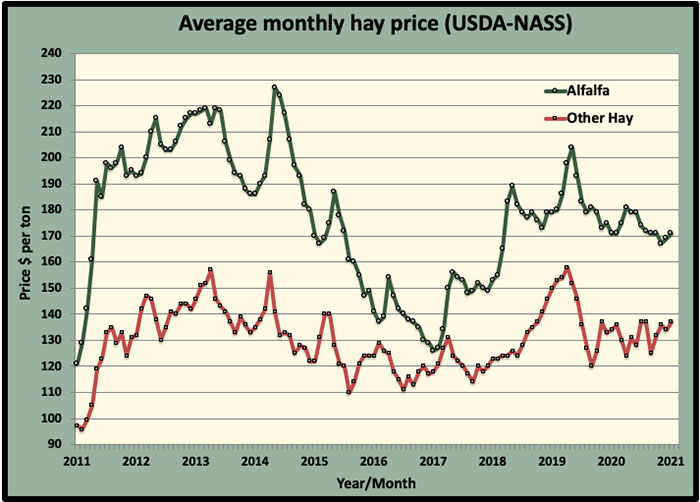 Three states registered double-digit, month-over-month alfalfa price gains in January. These were North Dakota and Pennsylvania, both up $11 per ton, and Ohio, up $10 per ton.

Only two states had double-digit alfalfa price declines for January, and those were Wisconsin (down $17) and Oklahoma (down $16).

The USDA also tracks the prices of Supreme and Premium quality alfalfa in the major dairy states and determines an average price from the five leading milk-producing states. This data is used to determine feed prices in the Dairy Margin Coverage (DMC) program. States with the lowest reported other hay average prices were North Dakota ($71 per ton), South Dakota ($76), and Minnesota ($81).