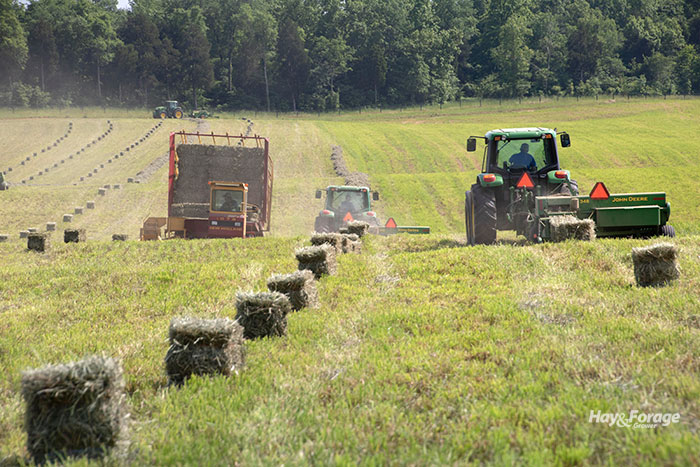 Dealing with rain is just part of the deal if you’re a haymaker in the humid East. Even in an average year, working around raindrops is a challenge, but in a wet year, the frustration can exceed intense.

Avoiding rain events is one thing if you have 50 acres of hay to make, but what if you have 1,000 acres and farm in humid southeastern Kentucky?

That’s the situation Clayton Geralds finds himself in. He’s a commercial hay grower who grows 340 acres of alfalfa, 580 acres of alfalfa-orchardgrass mix, and 120 acres of timothy. Geralds harvests his hay in small square bales and markets to the southeastern U.S. horse market.

During the University of Kentucky’s virtual Alfalfa and Stored Forage Conference, Geralds spoke as part of a farmer panel, addressing the question, “When the weather doesn’t cooperate, which fields do I cut first?”

Geralds uses an extensive line of equipment to take advantage of the days that do allow for hay harvesting. He cuts with two 16-foot, self-propelled mower-conditioners; teds his hay with three 26-foot, six-basket tedders; and rakes with four 28-foot, Y-configured wheel rakes.

The baling is done with seven small square balers that allow Geralds to drop about 2,100 bales per hour. The bales are collected with four self-propelled bale wagons. For fields relatively close to the hay barn, Geralds figures they can pick up and store about 1,900 bales per hour.

Unfortunately, even an impressive equipment line can’t keep the rain away.

“It’s a lot easier to look back and figure out what I should have done than look ahead and always know what the best thing is to do,” Geralds said of making a decision to cut or not. “In our area, we get an average of 47 baling days per season. In 2020, we only got a total of 24 baling days.”

With 1,000 acres of hay to make, it’s impossible to get it all made “right” if every field hits optimum maturity at the same time. This is the reason Geralds has a diverse number of hay types.

“Timothy needs a 3- to 4-inch head to be considered good horse hay, so we can put those acres on the back burner and bale them last in late-May or early June,” Geralds said. “The 280 acres we drilled grass into last fall will also be delayed and won’t be stemmy or coarse, so those acres can be harvested in the middle or end of May. For the older alfalfa-grass stands that will be terminated in the fall, I’ll cut those fields around April 15 to 20, then roll it up into baleage, apply nitrogen fertilizer, and have it ready to go for a second-cutting hay harvest,” he explained.

Geralds continued outlining his 2021 plan. “That will leave me with about half of my acres left that I’ll have to concentrate on during late-April and early May to get it cut right for good-quality horse hay. We initially focus on the alfalfa because that will go downhill in a hurry, but we’ll also work on the mixed-grass stands,” he shared.

The need to adapt

If 2021 turns out to be another year of persistent rain in the spring, then the decisions get more difficult.

Geralds offered the example of an alfalfa-grass field that is 35 days old and ready to cut. “It’s going to be about 60% alfalfa, 35% orchardgrass, and 5% weeds. That’s going to be good hay, but let’s say they’re calling for rain, and we could be delayed by 10 or 15 days. At that point, the field is probably 35% alfalfa and maybe up to 20% weeds with the remainder being orchardgrass. So, our quality really takes a hit.”

Rather than waiting for a harvest window in such a situation, Geralds said they have learned to just cut the field at 35 to 40 days, make baleage, and not take up space in their hay barns with poor quality hay. “In our business, the key is making top-quality hay — that’s how we make a profit,” Geralds said.

Geralds doesn’t like to cut hay when the chance of rain is more than 20%, but if he finds himself behind with a lot of acres needing to be cut, he will take the risk with a 30% to 40% chance of rain.

“In that situation, we will cut fields with heavier grass rather than the alfalfa,” he said. “Alfalfa just can’t withstand much rain after it’s been cut, and we don’t like to ted the alfalfa if we don’t have to, so it maintains its color.”

Geralds doesn’t like to give up on a field and make it into baleage, but sometimes, as the old saying goes, “Discretion is the better part of valor.”

“Our money is made on high-quality, small square bale horse hay,” Geralds said, “and it’s always our goal to fill the trucks with a product that our customers desire.”

The Kentucky haymaker admits that he doesn’t always make the right decision, but with a dependable line of equipment, a diverse array of hay types, the ability to make baleage when needed, and a well-thought plan, Geralds always puts himself in a better position than most.