By Wayne Coblentz
The author is a USDA-ARS research scientist at the U.S. Dairy Forage Research Center, Marshfield, Wis. 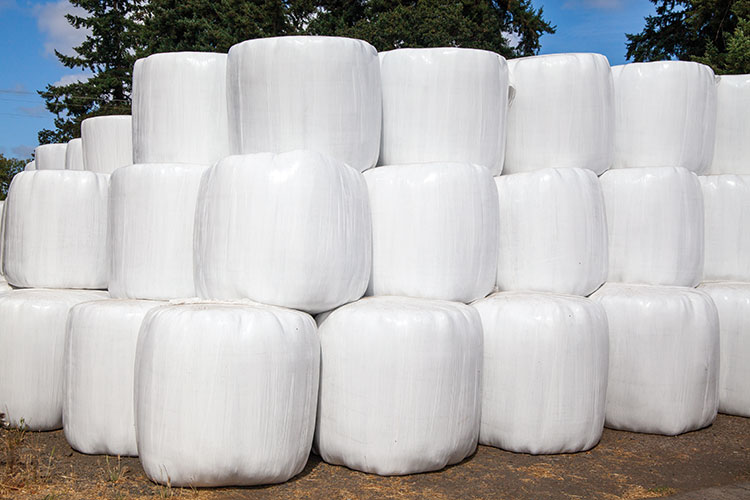 Managing bale moisture is an important consideration in properly conserving high-quality baled silages for subsequent cash sale or use in livestock feeding operations. However, there are probably more aspects to this issue than are normally considered.

It has long been understood that a major driver within any silage fermentation is forage moisture, but is that always good? If not, when is it a problem? Why? Can baled silages be too dry? Why, or why not? Unfortunately, the answers to these questions are not simple.

Most producers understand that the main goal within any silage fermentation is to exclude air and to produce (primarily) lactic acid from plant sugars, which makes the resulting silage more acidic and usually more stable. Figure 1 illustrates the relationship between the production of lactic acid and initial bale moisture gleaned from 283 grass, alfalfa-grass, or alfalfa baled silages made as part of 10 research studies at the University of Wisconsin’s Marshfield Agricultural Research Station. The normal target for moisture in baled silages ranges between 45% and 55%, which is highlighted in green in the figure. 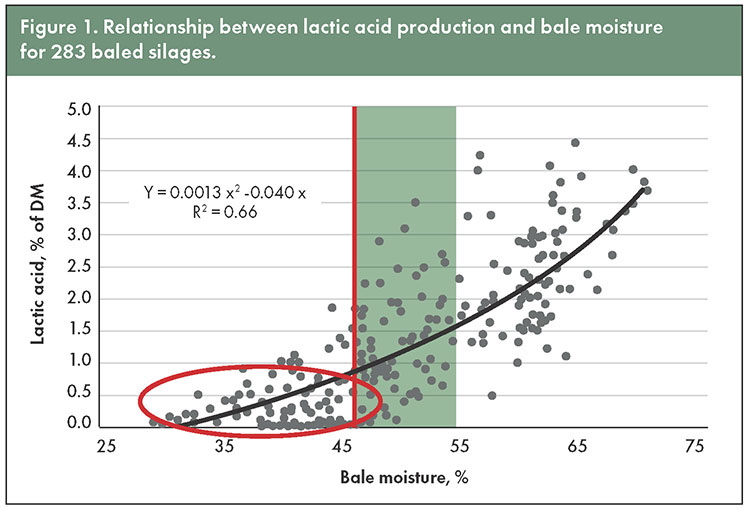 The data are somewhat scattered because the forage species and/or species composition varied widely across studies, and numerous treatments were atypical or intentionally mismanaged to meet the objectives of individual experiments. Despite this inherent variation across bales, a curvilinear (quadratic) response curve explained about two-thirds (R2 = 0.66) of the variation in lactic acid.

One distinguishing feature of this overall response is the low or even nondetectable concentrations of lactic acid in most bales made at lower moisture concentrations than the minimum threshold of the recommended range (45%; see red circle). It should be noted that these bales were not necessarily poorly preserved, nor was their feeding value compromised; however, it does mean that preservation was largely accomplished by excluding air. Since little acid was produced in these bales, the added stability from an acidic (depressed) pH was mostly nonexistent. Once bales reached the recommended range for initial moisture, the production of lactic and other fermentation acids increased at an accelerated rate.

Some years ago, Richard Muck (now retired from the U.S. Dairy Forage Research Center) offered the comment in the Journal of Dairy Science that fermentation (or decreasing pH) was relatively unimportant in preserving high-quality dry silages (less than 45% moisture). While this comment was offered in an era dominated by upright oxygen-limiting silos, the same principle applies for relatively dry baled silages, and this concept has been recognized by some producers.

There are several practical reasons why relatively dry silages are at least somewhat attractive. One such reason is the weight of silage bales; a 4x4-foot silage bale can weigh in excess of 1,500 pounds and represents a legitimate safety issue when undersized tractors and other equipment are used during transport, especially over uneven terrain. Secondly, most state-of-the-art balers, even those designed specifically for baled silages, are at least coequally built to bale dry hay, and they generally handle dry forages better than wet ones.

While these reasons remain relevant today, they are probably less significant than they were a quarter-century ago, when baled silage technologies were relatively new. However, the most important reason for limiting the moisture concentration in baled silages is the need to avoid secondary clostridial fermentations. Telltale signs of this type of activity are the production of butyric acid and ammonia, both of which are undesirable.

Not all forages are equally susceptible to clostridial activity because they differ with respect to fermentable substrate (plant sugars), buffering capacity (inherent resistance to pH change), possible contamination by dirt or manure, and many other factors. For these reasons, alfalfa and other legumes are more at risk than most cool-season grasses that generally have more sugar, and they are less heavily buffered. In addition, direct-cut, wet forages are particularly at risk, and a very common recommendation for avoiding clostridial fermentations is simply to wilt the forage before ensiling.

A rapid pH decline and a low (acidic) terminal pH also are beneficial in controlling clostridial activity, although neither is improved by excessive wilting. Historically, avoidance of undesirable secondary fermentations has been an important research topic throughout northern Europe, where ensiling direct-cut or wet forages has been more commonplace than in North America.

Typical recommendations for precision-chopped silages are not to exceed 70% moisture at harvest, both to avoid clostridial activity as well as to prevent effluent losses. As described previously, this upper management threshold is lower or drier (55%) for baled silages. The previously discussed practical considerations of excessive bale weight (safety and transport), as well as the sometimes problematic mechanical nature of baling wet forages, contribute to the recommendation.

Another major difference between silage types is the heterogeneous nature of baled silages. During the ensiling of precision-chopped forages, the actions of chopping, blowing into a wagon or truck, layering in a bunker, or blowing into an upright silo all act to homogenize the forage.

This mixing occurs with respect to species composition from mixed swards but also, and more importantly, with respect to moisture. Poorly wilted forages from swales, ditches, or under tree lines are effectively blended with drier material obtained from other parts of the field. This does not occur for baled silages, in which moisture or heavy concentrations of legumes can be isolated in specific portions of the bale, which enhances localized risks of undesirable fermentations within those bales.

The potential problem is theoretically greater for large square bales, where forage from one portion of the field is physically separated from that obtained from another part of the field based on the order it entered the bale chamber; for round bales, forage is added in layers around the entire bale circumference, providing at least some distribution. 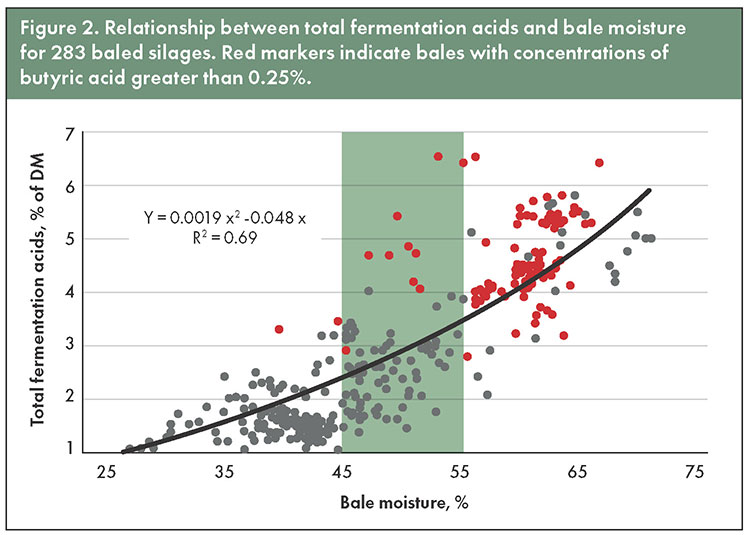 Figure 2 illustrates some of these points for the 283 research bales made in Marshfield, Wis., over the last decade, which were summarized for lactic acid concentrations previously. In this figure, the pooled concentration of all fermentation acids is plotted against initial bale moisture, again yielding a curvilinear (quadratic) relationship in which bale moisture explains just over two-thirds (R2 = 0.69) of the variability in the data set. Markers filled in red further indicate bales with concentrations of butyric acid greater than or equal to 0.25%.

While management recommendations indicating problematic silages differ somewhat by source, this concentration of butyric acid is greater than often deemed acceptable, and it is a sensitive indicator of clostridial activity. Among the 78 bales made at greater than 55% moisture, 52 bales exceeded this 0.25% threshold. Obviously, the relationship of clostridial activity with bale moisture is not binary, and a continuum of responses exist.

An obvious question might be — “Why do we care?” 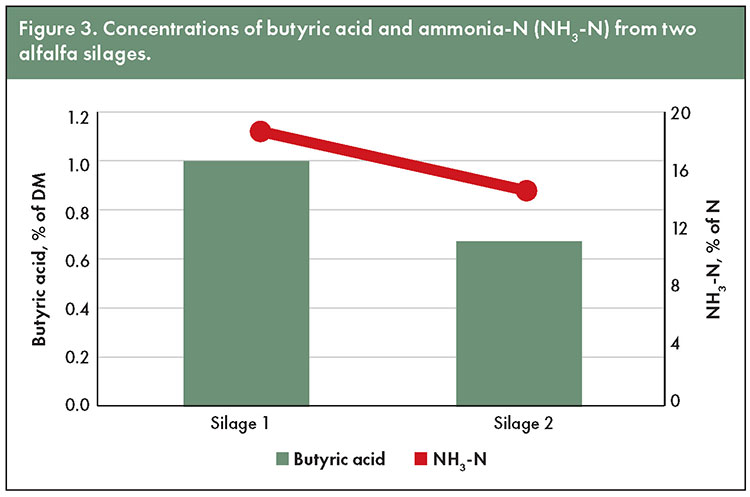 In severe cases, there is significant loss of dry matter and potential refusal by livestock. One form of clostridia (Clostridium tyrobutyricum) is associated with “late blowing,” a form of spoilage in some cheeses. In less severe cases, voluntary dry matter intake is impaired or restricted. This point is illustrated in Figures 3 and 4, where two baled alfalfa silages made at Marshfield were compared for concentrations of ammonia-nitrogen (NH3-N) and butyric acid (Figure 3), and later offered to gestating sheep to assess voluntary intakes of dry and organic matter at the University of Arkansas (Figure 4). 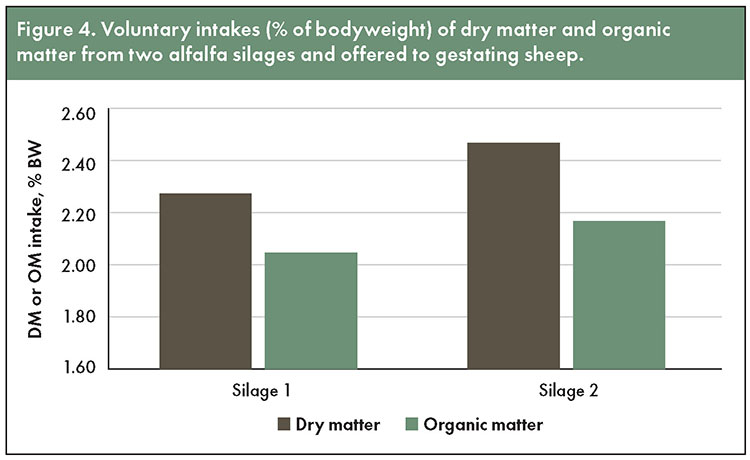 Both silages had greater concentrations of secondary fermentation products than considered acceptable, but Silage 2 had only two-thirds the concentration of butyric acid found in Silage 1. After processing and offering to sheep, respective voluntary intakes of dry and organic matter were greater by 0.17% and 0.14% of bodyweight for Silage 2 compared to Silage 1.

Oftentimes, questions are asked about using inoculants to improve the fermentation of baled silages. Some producers do this routinely with good success, but many (and probably most) do not. Unlike precision-chopped silages, the restricted nature of fermentation in baled silages begs legitimate questions about how much benefit might be attained from encouraging a more aggressive fermentation within this silage type.

There are a few situations where lactic-acid producing inoculants might be beneficial. These include:

While most of these suggestions are quite logical, they are (unfortunately) also somewhat speculative, and not really supported by a good body of repeatable research. There is still much to learn.

It’s the linkage, not the lignin Next

Forage, a caliper, and Mars Previous