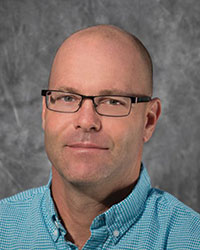 Brian Irish
$47,000
Researchers could be one step closer to finding ways to combat spring black stem and leaf spot (SBS), a fungal disease that reduces quality and yield in alfalfa. Recent Alfalfa Checkoff-funded research may give alfalfa breeders more information to develop cultivars with improved resistance to SBS. But that’s a bit down the road, says Brian Irish, the geneticist conducting the work. Irish is with the Agricultural Research Service Plant Germplasm Introduction Testing and Research Unit in Prosser, Wash.

Irish had heard alfalfa industry representatives discussing the disease, which causes severe defoliation and crop losses, especially in alfalfa spring growth. It is a problem particularly in the Midwest but can also be found in other regions with cool, wet weather early in the year.

Few modern alfalfa cultivars show more than moderate resistance to SBS, according to Deborah Samac, an ARS-USDA research plant pathologist collaborating with Irish on this project. Fungicide control options are effective but do not always have a positive return on investment, and if farmers harvest alfalfa early where disease pressure is severe, they potentially reduce yield, Irish added.

“So my ears perked up about this being an important plant pathogen of alfalfa for which better management strategies were needed, and the best way to manage any disease, in my opinion, is by innate plant disease resistance incorporated into the crop,” he said.

With Checkoff funding, Irish and his team hoped to find enhanced sources of resistance to SBS by performing disease reaction screening experiments. But first, there were hurdles to face.

The standard test inoculation protocol developed to screen alfalfa for disease reaction and selection wasn’t working out. “The procedure as followed didn’t produce the right outcomes, so we had to optimize it – play around with it,” Irish said.

By significantly reducing the concentration of fungal spores applied to plants, the researchers could distinguish differences between moderately resistant and susceptible cultivars.

The standard check cultivar Lahontan will be recommended as a susceptible reference. “Lahontan melts when we inoculate with this disease; it just does not like it and is very susceptible,” the researcher said. Other standard check cultivars showed improved resistance, but more than 14,000 plants of 79 different cultivars had to be screened in replicated greenhouse trials. “We identified several cultivars that were more resistant than the suggested moderately resistant reference. When we propose modifications to the test protocol, we will suggest the use of more resistant materials as references,” he said.

A total of 189 lines or accessions corresponding to 68 different species in the Medicago genus, considered related to alfalfa (Medicago sativa), were also screened. “The idea was, if we screen through many different species that are related to alfalfa, we might find sources of disease resistance that we don’t find in the M. sativa pool. It is possible that other alfalfa-related species have disease resistance that can be bred into alfalfa,” Irish said. “These evaluations were also carried out in replications – multiple lines repeated to strengthen the evidence of findings. We did find that several of these species were considerably more resistant, even when compared to the best-performing alfalfa we found.”

“Many of the lines screened outperformed the moderately resistant standard check cultivars, particularly when they originated from cooler regions of the world and environments,” he said.

In continued research, Irish and his team have made selections and plan to continue to breed the materials found to be disease resistant. “We are going to perform directed crosses, and we will screen progeny for disease reaction to try to improve resistance further. This improved germplasm will eventually be released and made available to the public,” he added. “I know some in the breeding community are interested in what we are doing. They could approach us about screening some of their advanced lines, or we could just demonstrate the modifications and show them how to implement the protocol.”

Left: These greenhouse alfalfa germplasm selections are resistant to the disease. Right: This plant shows susceptibility to spring black stem and leaf spot.