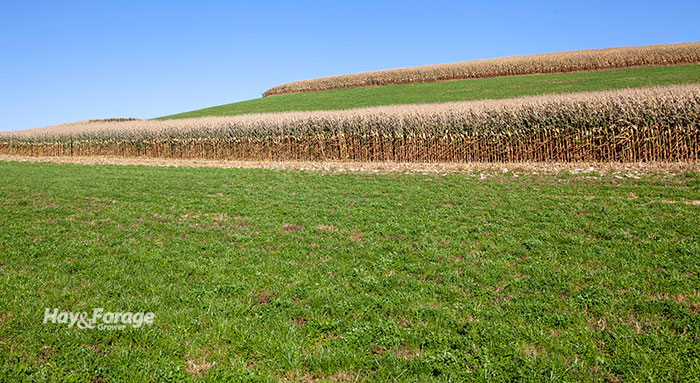 Rotating a field from one crop to another can promote better yields and elevate levels of nutrients in the soil for future production. These benefits are never more pronounced than when alfalfa is rotated to corn.

Jeff Coulter with University of Minnesota Extension points to the results of a study that examined alfalfa-corn rotations in southwestern Wisconsin and northern Iowa. The study concluded that corn following alfalfa had higher first-year yields – and sometimes higher second-year yields – compared to corn following other crops.

Additionally, the study showed that nitrogen applications to the fields did not impact yields during the first year of corn, and only improved yields half of the time in the second year. This indicates the nitrogen requirement for corn following alfalfa was lower than that for corn in other rotations.

Coulter says alfalfa preceding corn promotes better soil aggregation and water infiltration rates, as well as reduced soil compaction, fewer soil- and residue-borne pathogens, and less pest pressure in a field. He also notes that a successful transition from one crop to another begins with alfalfa termination.

Fall termination can lead to an earlier release of nitrogen in the soil for the next year’s corn crop. Terminating alfalfa at this time of year can also promote earlier drying and warming of soil come spring. However, Coulter says fall termination has some downside.

“Termination in the fall results in less cover to protect against soil erosion during the winter if tillage is used,” Coulter asserts. “Moreover, termination in the fall does not provide farmers with the option to assess the stand in the spring and determine whether alfalfa could be productive for another year.”

No matter the season, alfalfa must reach an adequate height before herbicide application. Coulter says at least 4 to 6 inches of regrowth is required for herbicide to translocate to plant roots and kill the crop entirely. If terminating alfalfa in the fall, Coulter suggests different herbicide options and advises administering these products before the first killing frost.

“A highly effective herbicide option for fall termination of alfalfa is 2,4-D alone or tank-mixed with dicamba,” Coulter says. “If grasses are present with alfalfa, a good option is to tank mix glyphosate with 2,4-D. High rates of glyphosate alone often result in only a partial kill of alfalfa.”

Alfalfa fields can also be terminated using tillage, although this practice might not be ideal for fields that are susceptible to soil erosion. Nonetheless, Coulter recommends using proper equipment, or combining termination tactics if tillage will not be sufficient on its own.

“Tillage implements such as a chisel plow with overlapping sweeps or a moldboard plow that completely cuts off all alfalfa roots are effective at terminating alfalfa,” Coulter says. “Tillage implements that do not completely cut off all alfalfa roots will be unable to provide complete alfalfa termination unless herbicide is applied before tillage.”

Delay tillage by at least three to four days if herbicide is applied to a field first or adhere to the product label if a longer delay is required. This interruption might interfere with a producer’s corn planting schedule if this type of termination is implemented in the spring, but it is necessary to follow herbicide application precautions and achieve a successful kill.

Capture all the energy your forage can offer Next