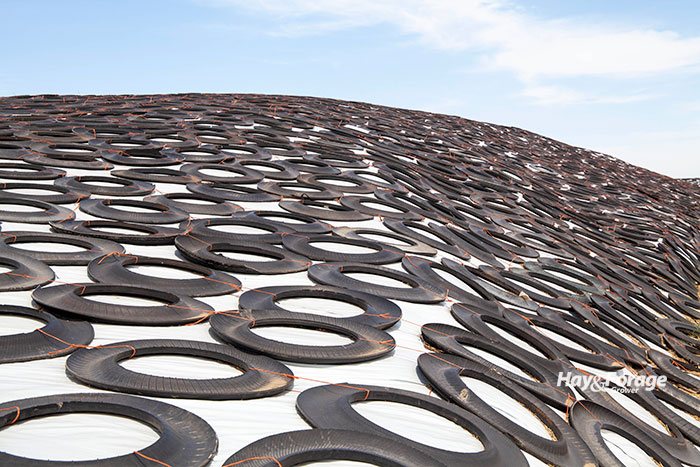 If the silage storage process were a movie, oxygen would be cast as the evil villain. This gas can infiltrate covered silage and sabotage the amount of dry matter available at feedout. To prevent this from happening, consider investing in an oxygen barrier film.

Oxygen barrier films are used on silage piles, bunkers, and trenches. They can either be incorporated into the storage area’s original plastic cover or added as a separate layer. Oxygen barrier films help maintain silage quality, and the benefits associated with them were discussed in a recent article in the Kentucky Dairy Notes newsletter.

Donna Amaral-Phillips with the University of Kentucky says oxygen barrier films have the greatest impact on the top layers of stored silage. According to a research study, dry matter loss within the first 2.5 feet of silage was cut in half when oxygen barrier films were used.

“This reduction in dry matter losses reflect results from 41 research trials, of which only two studies showed a negative result,” the extension dairy specialist explains.

The additional protection of an oxygen barrier film not only safeguards the top layers of silage but also layers on the sides. Amaral-Phillips reports that other studies have shown lining bunkers and trench silos with oxygen barrier films limits dry matter loss in silage near sidewalls.

Despite their advantages, oxygen barrier films can be more expensive than traditional plastic coverings; however, they have the potential to pay for themselves.

In the aforementioned research study, it was estimated that oxygen barrier films reduced dry matter loss of all the layers of silage in a storage structure by an average of 8%. With this information, Amaral-Phillips created a cost-benefit analysis for producers to ponder.

“If we decrease the amount of silage lost by 8% in a silo holding 200 tons of corn silage, we have an additional 16 tons of silage to feed,” Amaral-Phillips asserts. “At today’s feed prices, corn silage has a nutritive value in excess of $100 per ton. Thus, that additional feed is worth $1,600.”

The extension specialist adds that even if feed prices declined to $50 per ton, the dry matter maintained by using an oxygen barrier film would still be worth $800. She notes that these savings are over and above the benefits of just using a standard plastic cover.

Oxygen barrier films must be in contact with silage for the duration of the storage to maximize dry matter retention. Amaral-Philips recommends arranging tire walls or sandbags across the entire surface of a covered storage area, ensuring these objects are close enough to touch one another.

Alfalfa just keeps on giving Next

Step up to the stockpiling plate Previous