A corn crop with multiple personalities

With the 2021 corn silage now in storage, we’re gaining a clear understanding of what its nutritional value will bring to dairy and beef operations. The energetic value attributed to silage comes from its carbohydrate fraction, which is comprised largely of fiber and starch, so that’s where we’ll focus our attention.

Fiber and starch content and digestibility dictate roughly 85% of the energetic value of corn silage. We also have a relatively clear understanding that the energetic value in corn silage is influenced by numerous factors, including seed genetics, management and agronomic inputs, maturity at harvest, particle size, and the growing environment.

After the crop is harvested, fermentation is also known to improve silage quality. However, we’ll focus on the environmental influence upon quality and recognize a new crop that appears to be markedly different, depending on the growing environment. One could even think of this year’s corn crop as having multiple personalities from a fiber and starch standpoint.

One consistent aspect of 2021 is that the season carried plenty of heat units for growing corn. Slow and delayed growth was not an issue this past year across the U.S.; however, adequate moisture was a substantial concern for the West and upper Great Plains and continues to plague those regions.

While plant breeders have made great gains in breeding for improved drought and stress tolerance, a robust corn crop still needs both heat and moisture. For those farming in the eastern U.S., the crop had adequate moisture along with heat and sunlight. This resulted in some large silage yields. However, a big yield often trends with marginal digestibility thanks to “sturdy” stalks and harder grain. The fiber in silage this year looks sturdy for eastern U.S. growers, as evidenced with lower total tract neutral detergent fiber (NDF) digestibility for silage in Figure 1. This observation likely relates to ample heat and moisture for growers in the region. 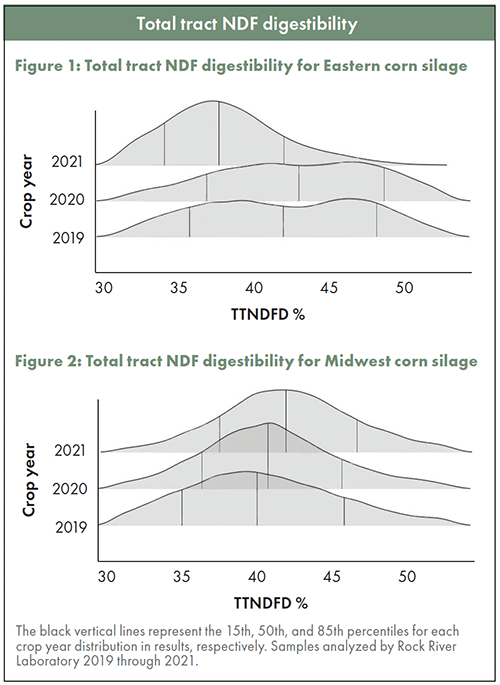 When either moisture or heat are missing at critical points in the season, corn plants will be stressed. Following stress, yield, plant health, or quality can be affected. For those in the Midwest through to the western U.S., moisture stress during the growing season likely influenced quality. The moisture stress early in the season may have contributed toward better fiber quality this year such as shown in Figure 2 for Midwestern growers. Here the growing environment contributed toward a different crop quality “personality” for the Midwest compared to the East.

From a grain and starch component standpoint, rainfall eventually came to help finish the crop. This late-season rainfall, coupled with more than adequate heat, likely boosted grain yields and bushel weight for the eastern U.S. Higher bushel weights are well received by grain farmers but can be negative in silage due to harder grain and less digestible starch by dairy or beef cattle. Lower grain digestibility appears to be more prevalent for 2021 silage in the Midwest or East, with a roughly 5 to 10 percentage unit drop in rumen digestibility (data not shown).

Moisture stress early coupled with rainfall and heat during grain fill could help explain the duality within the crop, with improved fiber quality for some but depressed starch quality for many. To check your crop’s personality, make sure to assess the silage’s fiber and starch digestibility measures. Benchmark your silage relative to neighbors as well as for years past.

While the outcome may be unique this year, any split fiber or starch characteristics were due to the split nature of the growing season and were beyond our control.

This article appeared in the January 2022 issue of Hay & Forage Grower on page 26.

Crimes of the cornfield Previous