By Rachael Long and Ken Giles

Long is a University of California (UC) Cooperative Extension farm advisor in Woodland, Calif. Giles is an emeritus professor in the Department of Biological and Agricultural Engineering at the UC-Davis. 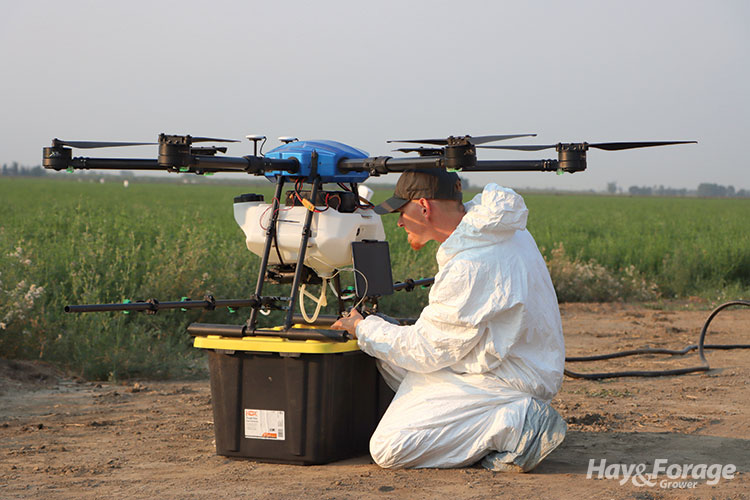 A technician checks over the spray drone to ensure it is ready for the next launch. Researchers at the University of California-Davis have been assessing the use of drones for controlling alfalfa summer worm pests.
Ian Gretteberger, U.C. Davis

Drones, or unmanned aerial vehicles (UAV), are more frequently being used for applying pesticides on farms for crop protection. This innovative technology for managing pests, weeds, and diseases is appealing for many reasons.

Drones are highly efficient, precise, help save time and energy, have a quick response time, and can cover vast areas tough-to-reach places that might need spot treatments. They also provide an additional tool for farmers to manage pests, especially in times of labor shortages. This is a growing reality as more agricultural pilots retire and there are fewer replacements to fill a need for crop dusters.

Although the use of drones for applying pesticides on farms is still limited in the U.S., UAVs are often commercially used in crop production elsewhere. For example, large drones are currently being used to spray fungicides on banana plantations in Central America and for applying insecticides on cereal grains and rice fields in Southeast Asia.

The future is now

The use of drones will continue to grow in the U.S. as laws restricting weight carrying capacity change and with research showcasing high levels of efficacy for pest control that are comparable to manned airplane applications. Pesticide registrants are also developing label language to facilitate and guide future use.

In California, that reality for controlling pests in alfalfa fields with drones is here. Researchers from the University of California (UC) Cooperative Extension service and UC-Davis, in collaboration with growers and registrants, found that drones work well for applying pesticides for summer worm control in alfalfa fields, including armyworms and alfalfa caterpillars. These insects are key pests of alfalfa as they feed on the foliage, resulting in yield and forage quality losses if left uncontrolled.

In the trials, Prevathon and Vantacor insecticides (chlorantraniliprole) were applied to alfalfa fields at 0.054 pounds of active ingredient per acre. In 2020, Prevathon was applied by drone versus a manned airplane at 10 gallons per acre (gpa); a second alfalfa field compared both application methods at 5 gpa. In 2021, Vantacor was applied to a third alfalfa field by drone at 2 gpa and 5 gpa, compared to Prevathon at 10 gpa by a ground rig sprayer. The 2 gpa volume is the minimum labeled rate for aerial application of Vantacor.

Spray cards (water sensitive paper) were used to assess spray coverage, and plant samples were taken to compare insecticide residue concentrations after treatment for the different application methods. Summer worm counts were also taken to determine the effect of the different application methods on pest control, the best indicator of the success of the application technology. Natural enemy counts were taken to determine the impact of the pesticides on beneficial insect activity. 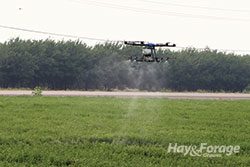 Drones were shown to provide a similar spray coverage as airplanes. Different nozzle types along with speeds and altitudes are being evaluated to achieve maximum performance.
Ian Gretteberger, U.C. Davis
The results of multiple field trials revealed that the spray cards had similar coverage for the drone and airplane insecticide application methods for all three alfalfa field sites. Overall, the drone application had a bit more variability in terms of spray deposition uniformity than the airplane application methodology. This was not due to the inherent qualities of the drone, but instead that the drone-based spray technology may require more refinement.

Airplanes have been used for applying pesticides for decades, and that technology is refined. Drones are new and there is a bit more work that needs to be done to fine-tune them for optimum pest control in crops, such as exploring different nozzle types for maximum coverage and optimal ground speed and flight altitude.

Insecticide residue concentrations on the alfalfa plants were remarkably similar for the drone and airplane application methods at the 2, 5, and 10 gpa spray volumes (Figure 1). Likewise, the drone, airplane, and ground sprayer rig all showed excellent summer worm control five to seven days after application (Figure 2). Prevathon and Vantacor insect control showed a true selectivity with no visible negative impacts to predators such as ladybird beetles or parasitoid wasps for any of the application methods. This is good news for an insecticide that controls the target pest well, without adverse impacts to natural enemies that help control secondary pests in alfalfa such as aphids.

Drone technology is a reality for pest control in alfalfa fields. While more research is underway, the results of this study show that effective drone spray applications can now be made with commercial UAV equipment. California currently has a specific UAV (unmanned) ag pilot license category, which means that for most commercial applications, the pilot of the drone is not required to have a commercial pilot certificate, only the Federal Aviation Administration (FAA) UAV certificate and the California Department of Pesticide Regulation license.

A current limitation for the use of drones for aerial spraying of crops in the U.S. is the 55-pound weight limit mandated by FAA regulations for the category of “small” UAVs. Some drone companies, such as Yamaha, have obtained certification for handling more than 55 pounds, and many others are in the process of requesting similar approval with research being conducted on larger aircrafts.

Further refinements and greater load limits will help to pave the way for more people to use drone technology on a larger scale in crop production in the U.S. Additionally, an industry-wide UAV Task Force is being formed to coordinate the development of labels and standards. Based on university and industry research, drones are a promising and viable option for aerial application of insecticides for pest control in alfalfa fields.