Hugh Aljoe is the director of producer relations at Noble Research Institute (NRI), Ardmore, Okla. Steve Smith is a wildlife and fisheries consultant with NRI. 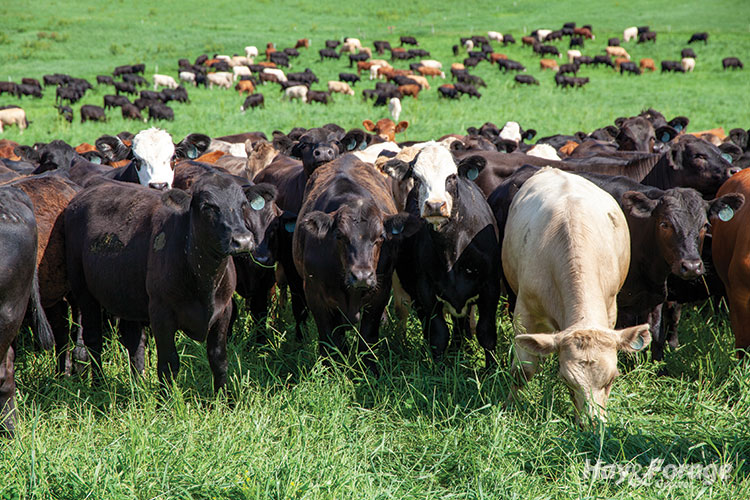 Regenerative grazing is a set of practices, guided by ecological principles, that uses the benefits of grazing livestock to rebuild soil health and may also help diversify the enterprises and income a farm or ranch produces. In the second installment of this three-part series, we’ll get into the importance of resting grass and how to get started rotating cattle as a precursor to adaptive or regenerative grazing.

One of the primary goals of regenerative grazing is giving plants the rest and recovery time they need following grazing, fire, or other disturbances. Plants need time and enough green tissue to be able to photosynthesize, which helps build energy reserves and grow their root systems as well as new leaves.

Recovery time will differ depending on the time of year of the disturbance, being more rapid during favorable growing conditions and slower during dry or cold periods. In the dormant season, recovery is on hold until spring. Ideally, before grazing begins, allow all pastures or paddocks to attain “full-flush” conditions, so the plants, and particularly root systems, are strong for the growing season.

Even as environmental conditions affect the recovery period, so does the severity of the graze, which is dictated by the amount of plant removed during grazing. The goal is maintaining plenty of plant residual, and that’s where the “take half, leave half” rule of thumb comes in, allowing the herd to consume no more than half of the forage that is readily available.

The reason we never want to graze more than half of a plant’s leaf area is that the root systems stop growing after being defoliated more than that; this slows recovery time. During the early growing season, the ideal is “top-grazing,” using only a third or less of the leaf material to attain the most rapid recovery of grazed plants.

Concerning plant recovery with regenerative grazing, don’t turn cattle back in when the grass looks lush. Pastures need to fully regrow past full flush and become a bit mature. In the ideal regenerative system in the southern Great Plains, plan for recovery periods for perennial grasses of about 60 to 75-plus days during the active growing season (early spring and summer). In late summer and moving into fall, recovery periods of 90 days or longer, which may extend into the next growing season if growth was stopped by frost prior to full recovery.

In addition to managing the overall residual of growing plants, grazing each pasture or paddock for a short time is essential to keep the most palatable plant species healthy and plentiful. Livestock naturally want to consume the most palatable plants, so they will graze preferentially, especially on fresh growth from the most desirable plants. The repeated regrazing of the same palatable plants prevents rest and recovery, and over time, most of the palatable and productive forage in the pasture will be lost.

If livestock are regrazing plants within a pasture during a grazing event, grazing periods are too long. During the growing season in the southern Great Plains, most plants start to regrow after three to four days of being grazed. Ideally, with regenerative grazing, livestock need to be moved out of a grazed pasture within three to four days (preferably every one to two days) during the active growing period and five to six days during conditions of slower growth.

Another reason to manage stocking rates (number of livestock grazing an area for a set amount of time) and grazing periods so that plants can fully mature during recovery is to grow enough organic matter to feed both the livestock and the organisms in the soil. In this “Phase 3” of the plant’s life, the livestock will seek out and graze the higher quality parts of the plant.

The low-quality, top growth biomass that animals leave behind is trampled for other organisms at and below the soil surface to feed upon. The trampled residual matter contributes to rebuilding the organic matter in the soil over time.

To let pastures rest, you’ll need a system of moving cattle from one area to the next. We encourage producers new to rotational grazing to start small, using existing pastures. When ready to try higher stock density grazing using electric fence, consider starting at a small scale to learn the new system. This means starting with one or two smaller pastures that are easily observed. At the end of a season, you’ll at least have an area on which you’ve implemented regenerative grazing techniques that can be applied later to additional acres.

Begin by training the cattle to respect an electric fence, since you’ll likely be using temporary polywire electric fencing to separate grazing paddocks. Purchase a high-quality fence charger that will last, and consider adding a high tensile electrical wire offset fence to carry the electricity around the perimeter of a starter pasture where you and the cattle can learn about this new tool.

Select a small pasture, and then put in a short length of test electric fence that runs out from the perimeter to separate the water source from the rest of the pasture so the animals have to learn to walk around the fence or almost into it to be able drink. Attach some flagging on the wire so they can see it, be curious, and walk up to it slowly. It’s temporary, so expect them to knock it down. Put it back up, and after a few days, they’ll build respect. Then, move that fence to a new location and see how they adjust to it.

Once cattle know what the fence is for, use polywire to create a temporary grazing paddock with access to water and large enough for a few days of grazing. Take time to watch the cattle and observe the grass and its recovery. Be sure you’re grazing to the desired intensity, but not overgrazing. With time, livestock will soon learn that every move to a new paddock means something better to eat.

As we’ve transitioned the Noble Research Institute’s herds to adaptive grazing, the cattle learned quickly and now readily follow us into a new paddock with fresh grass as soon as we grab the polywire reel or gate handle. It’s works far better than trying to push them!

The more time spent with livestock, the more they will communicate to you when it’s time to move. If they begin to look at you, wanting to move, you’ll know either forage quantity or quality is limited. If they meet you at the gate, then it’s an indication that the move came too late.

When you start small, and apply short grazing events followed by long recovery times, any “missteps” have only a temporary impact on the forage, livestock, and soil. The key is being observant and adjusting as you go.

Be sure to keep good records about grazing and recovery times and how they differ with weather and season of year. What stocking rate and stock densities seemed to work best? What didn’t turn out as well as you thought it would? What did you learn? The notes you make the first year will be invaluable during future years.

Once your livestock are somewhat accustomed to use of the electric fences and you are becoming comfortable with basic rotational grazing management, then it’s time to move into what we would call adaptive or regenerative grazing.

In Part 3 of this series, we’ll go deeper into planning for and managing adaptive multi-paddock (AMP) grazing and the option of using high stock density grazing when you have abundant quantities of forage.

The good, bad, and ugly of spring grass Previous