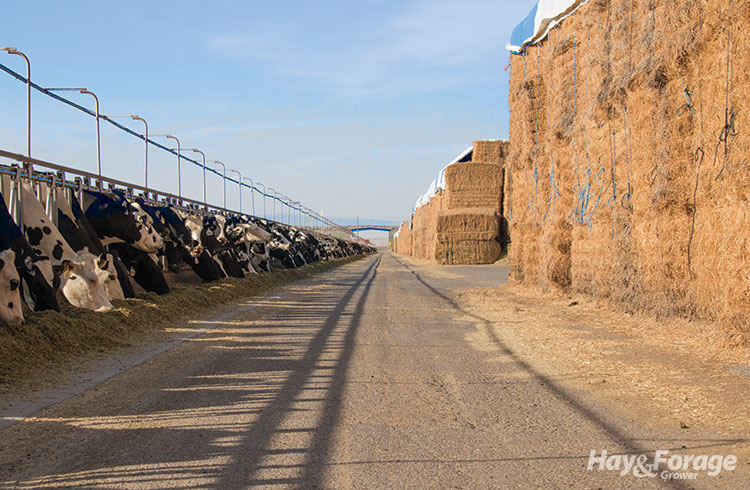 Over the past 30 years, alfalfa has lost market share to corn silage in dairy cow diet formulations. Multiple reasons have been cited for this shift, including lower alfalfa yields, winterkill risk, feed variability, and high production expenses.

At the same time the rapid move to corn silage has been occurring, growers and nutritionists still recognize that alfalfa has many positive agronomic, environmental, and feeding attributes.

“From a nutritional perspective, it would be hard for us to find two forages that are more complementary with each other than alfalfa and corn silage,” said Rick Grant while speaking at the Midwest Forage Association’s Symposium 2022 in Wisconsin Dells, Wis. The president of the Miner Research Institute in Chazy, N.Y., noted that the starch and its degradability in corn silage matches “so well” with the amount of protein and the solubility of that protein in alfalfa.

In continuing to contrast alfalfa and corn silage, Grant noted that the “Queen of Forages” has less neutral detergent fiber (NDF) and higher undigestible NDF (uNDF), but the rate of digestion is much faster than corn silage. Alfalfa’s fiber is more “fragile,” and it breaks apart into cuboidal particles that are easy to swallow and pass through the rumen. As a result, alfalfa proves to be less filling than grasses such as corn silage, allowing for higher dry matter (DM) intakes.

“Alfalfa has great buffering attributes for the rumen,” Grant said. “It contains more sodium and potassium, has a higher dietary cation-anion difference (DCAD), and overall, we think that alfalfa may help to stabilize rumen pH and boost milkfat in higher corn silage rations.”

Alfalfa is also a much better source of lysine, an essential amino acid, than corn silage.

The dairy nutritionist noted that alfalfa’s value as a protein source is certainly greater in these times of high soybean meal prices, but Grant also thinks there is the ongoing potential to optimize the interaction between the rumen degradable protein of alfalfa and the starch from corn silage to enhance microbial protein synthesis. However, he warned that other ration ingredients need to be formulated in such a way to capitalize on this synergy.

Grant and his research team decided there was a need to re-evaluate alfalfa inclusion in modern, high-producing dairy cow ration formulations that often have high concentrations of forage fiber. They wanted to determine if more alfalfa can successfully be fed in dairy rations and if there was a benefit in doing so.

The feeding trial was completed in 2021 using 105 Holstein cows. Each treatment diet was formulated for 62% forage and the same predicted metabolizable protein, although in the end the higher alfalfa diets provided a little more metabolizable protein. Inclusion of alfalfa and corn silage were varied as follows:

The high-quality alfalfa was fed in a total mixed ration (TMR) as chopped large square bales. “We used hay instead of haylage because we could maintain a consistent diet more easily,” Grant explained. “From previous research, we know that the form of alfalfa doesn’t influence dry matter intake or fat-corrected milk, if the quality is the same.”

For the higher alfalfa diets, some water was added to keep DM under 60% and to mitigate the fine particles from sorting out. The forage quality analysis of the alfalfa and corn silage is documented in Table 1 and the diet composition is presented in Table 2.

In evaluating the results, Grant said his first take-home message is that we can feed alfalfa over a large range of the forage fed and still get good DM intake, milk production, and production efficiency (Table 3).

Drilling down a bit deeper, Grant said they didn’t measure any difference for milkfat, even though they expected to find one (Table 4). They did obtain differences for pounds of protein produced per day. “These weren’t big differences, but they were significant and would make a difference in the milk check,” Grant said. “It was the 30:70 and 50:50 diets (alfalfa to corn silage) that resulted in the most true protein output.”

Grant also pointed out that it appeared rumen efficiency from a fiber fermentation standpoint was best for the 30% to 50% alfalfa diets based on their greater de novo fatty acid milkfat concentrations. Rumination time in minutes per day were all in acceptable ranges except for the 90% alfalfa diet, which was the only treatment below 400 minutes.

“As with some past studies, this trial reinforced the idea that it’s probably best to stay away from the extremes for either corn silage or alfalfa and be somewhere in the middle,” Grant asserted. “From a nutritional standpoint, this makes sense.”

Concluding, Grant said it’s apparent that high-producing cows can be fed high-quality alfalfa as 10% to 90% of the forage component and still maintain milk production and efficiency. He noted that the “sweet spot” seems to be 30% to 50% alfalfa if milk components and rumen function are to be optimized.

“Alfalfa and perennial grasses have significant agronomic benefits,” Grant said. “As we look to a sustainable future for dairy-forage systems, we can’t ignore these benefits. It might be time to start including higher levels of alfalfa in our rations, especially for those currently feeding extreme amounts of corn silage.”