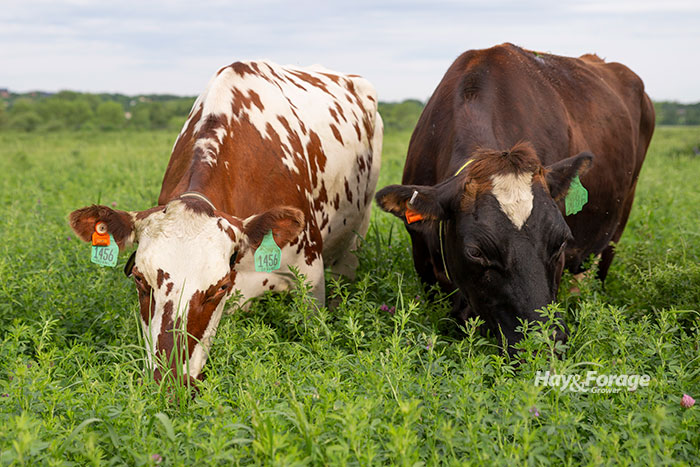 Widespread conversion of pasture acres to alfalfa is never going to occur, nor should it. That said, it’s not uncommon to see alfalfa as a component of a pasture mix or, in some cases, a primary grazing species, especially on dairy grazing operations.

These days, more than ever, alfalfa makes good sense as a component of an overall grazing strategy. A big reason for this is the shift toward management-intensive grazing and away from continuous stocking. Alfalfa is a species that needs its rest and recovery period, and some form of rotational grazing fits the bill perfectly.

Another trend that gives alfalfa additional utility as a grazing crop involves the growth of grass-finished beef operations. For such enterprises, legumes must be a major component of the pasture inventory. Unlike many legumes that need to be regularly reseeded, alfalfa can offer relatively long-term production and exceptional cattle gains. 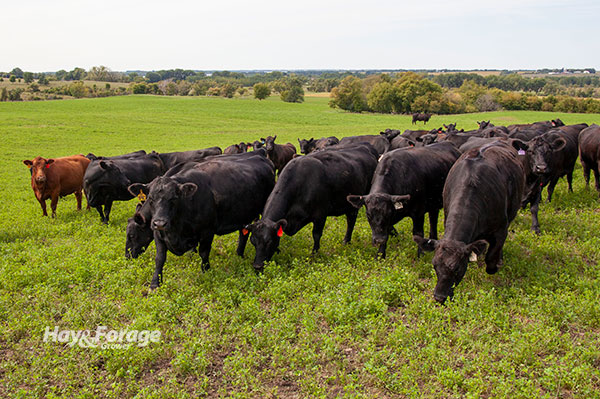 Beef cattle graze a terminal alfalfa field during the fall.

Though grazing pure alfalfa stands has been made to work, many graziers may be more interested in blending alfalfa with grasses.

Alfalfa’s big advantage comes in the form of animal performance. For this reason, it is an excellent choice when grazing dairy cows, cow-calf pairs, or stockers. Studies have shown that a 50-50 mixture of alfalfa and grasses can generally produce 1.5 to over 2 pounds of gain per day. Those are also the kind of gains needed for a successful grass-finished beef operation.

Some operations will start by seeding a pure stand of alfalfa, use those fields for making hay or baleage for winter feeding, then interseed a grass in the third year. The grass-alfalfa fields are then rotationally grazed over the next three to four years.

An important aspect of alfalfa is its ability to produce when most other species have succumbed to dry growing conditions during mid- and late-summer. This is because of its taproot and the ability to extract water from deep in the soil profile.

Summer is an excellent time to graze alfalfa because hay yields are usually declining, and the cost of harvesting is greater on a per ton basis. Further, alfalfa stems are generally smaller and more palatable for summer growth.

A big reason why alfalfa is not used as a grazing species centers on concerns over bloat. Generally, bloat occurs when cattle rapidly consume the soluble proteins of alfalfa leaves. This results in the formation of a froth in the rumen that doesn’t allow gas to escape.

The risk of bloat is highest with young, vegetative plants. Alfalfa also offers a higher bloat risk when plants are wet from dew or rain. Using alfalfa in a forage mix that includes more fibrous grasses provides cattle with a wider feed selection than just straight alfalfa. As such, bloat is rarely a concern in mixed stands.

For producers wishing to give alfalfa a try in their grazing operations, here are some of the recommended practices for avoiding bloat when grazing alfalfa:

• Avoid turning animals onto fresh, high-bloat potential pasture that is moist with dew, rain, or irrigation water. Both rate of intake and initial rate of digestion are higher from moist plants, causing more rapid initial digestion.

• Never allow animals grazing alfalfa pasture to get so hungry that they consume too much in one feeding. Always have sufficient feed available.

• Make paddock rotations mid-day or later; this is when the forage is drier and plant carbohydrate concentrations are higher.

• Avoid dramatic changes in forage quality when rotating from paddock to paddock by leaving adequate residue.

• Avoid grazing legumes before they begin to bloom. Make closer observations for bloat when many plants are at a younger growth stage.

• Manage grazing to encourage livestock to consume low or nonbloating plants and plant parts such as an alfalfa-grass forage blend. For example, use daily strip grazing or high stock density in multiple paddock systems rather than continuous stocking.

• Be extra observant for cattle bloat when alfalfa shows a rapid flush of growth such as during cloudy, wet periods in the spring and after a plant stress event such as hail or drought.

• Talk to your veterinarian about the advisability of using a bloat-prevention product.

Most graziers who routinely graze alfalfa report few problems with bloat. Many suggest that the “fear of bloat” is greater than the “occurrence of bloat.”

For more detailed information on grazing alfalfa, download the new publication from the National Alfalfa & Forage Alliance Grazing Alfalfa: Economic and Sustainable Use of a High-Value Crop.

Broomsedge is talking: Are you listening? Previous