Advice from a baleage pioneer 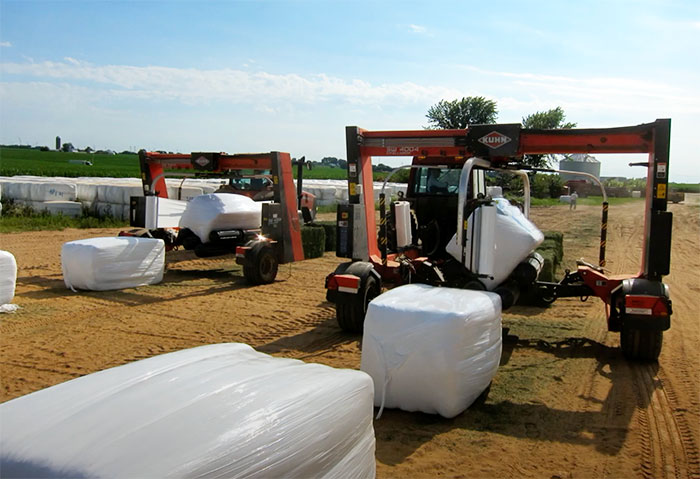 Being an early adopter is a double-edged sword. On the one hand, it’s possible to gain a competitive advantage; on the other hand, mistakes need to be made in real time as there is little experience from others to lean on.

Kendall Guither has been making baleage for 25 years. He’s made most of the mistakes, but he’s also had plenty of time to develop a system and marketing strategy that needs few improvements.

Guither and his wife, Katherine, farm in northwest Illinois near the town of Walnut, growing both alfalfa and corn. He recalls that in the late 1990s many people didn’t know what baleage even was. Now, his high-quality baleage is in equally high demand.

Starts with a good stand

Guither’s success begins by establishing a healthy stand of alfalfa. He broadcasts 20 pounds of coated alfalfa seed per acre onto a firm seedbed, using alfalfa varieties with fast regrowth and excellent winterhardiness. Guither seeds both HarvXtra-traited and conventional varieties. “The HarvXtra varieties are most beneficial when cutting gets delayed by wet weather,” he noted.

Guither rolls newly seeded fields two times with a cultimulcher (teeth up) to ensure good seed-to-soil contact. “We used to only do it once but have found we get better germination with two passes.”

The Prairie State farmer routinely scouts his fields for insect pressure and diseases. He emphasized the importance of controlling potato leafhoppers during the summer. “They can kill your quality and yields, and the effects of leafhoppers persist beyond just one cutting.” 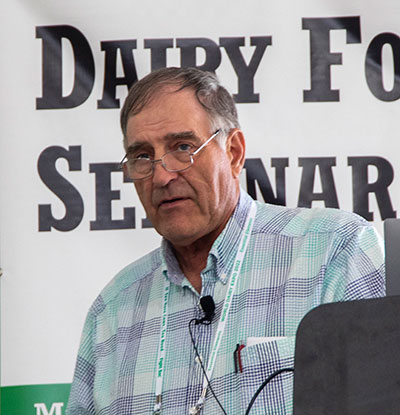 “I harvest my alfalfa pretty aggressively,” the veteran baleage producer said. “I’ll start my first cutting when alfalfa reaches late-vegetative or early bud stage. I have some customers who maintain a standing order for early-cut, first-cutting baleage. The other advantage to an early first cutting is that the stems are thinner and more pliable, so they won’t penetrate the plastic after the bale is wrapped.”

In Guither’s experience, high-quality baleage always sells. “I run out of it every year,” he said.

For subsequent summer cuttings, Guither mows at the late-bud stage and, one time during the summer, will allow his crop to flower and build higher levels of root reserves. When mowing, Guither is a proponent of laying a wide swath to speed drying and reduce respiration losses.

“I want to have my summer cuts done by the beginning of September, then I’ll take a late-fall cut after the plants go dormant,” Guither explained. With that late cut, he leaves about a 5-inch stubble to catch snow.

Guither uses rotary rakes and a merger between mowing and baling. These implements best handle the wetter forage material. He will put up to four windrows together, depending on the amount of biomass. This helps to prevent overdrying.

When making baleage, Guither noted that it’s important to keep soil out of the bales. This is why he doesn’t recommend using a wheel rake. “Clostridia can be a problem in baleage where dirt was incorporated into the bale at some point during harvest.”

It’s not a backup plan

Ideally, Guither likes to bale between 44% and 58% moisture. He might go a little higher or lower if needed but doesn’t like to go below 40%. “There’s just not enough moisture below 40% to get a good fermentation,” Guither asserted. “Baleage shouldn’t be a backup plan. If you’re going to do baleage, then go into it with the mindset of harvesting for baleage. If you don’t, it will get too dry for a good fermentation.”

Another baleage key that Guither emphasized was to make dense bales to minimize oxygen within the bale. He uses twine with a high 440 knot strength on his 3x3 large square bales. Guither likes the 3x3 bales because they are easy to wrap, are safe for transporting, and most of his customers have equipment that can handle their size and weight. They are also easier to feed by hand, if necessary. He uses a bale squeeze attachment to move and load bales.

Guither applies a dry inoculant on all of his baleage to promote faster fermentation and improve forage quality. He emphasized the importance of choosing a quality product and applying it at recommended rates.

Alfalfa bales are sampled prior to being wrapped. This avoids the need to poke holes in the plastic if bales were cored later. Guither samples at least a third of the bales that come off a field to get a representative sample. If it’s a small field, he might core every bale to make a composite sample. 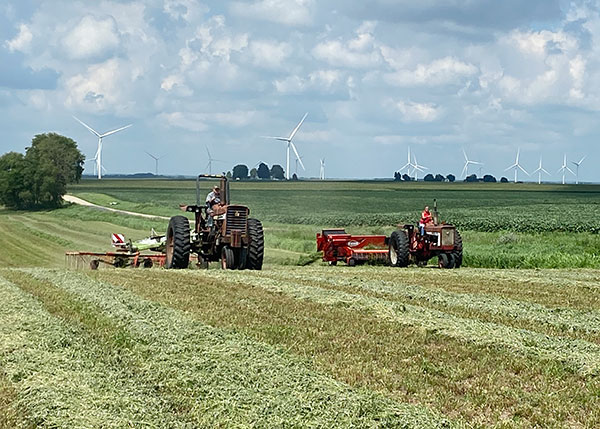 The Guithers rake and merge alfalfa swaths in preparation for baling and wrapping.
Photo: Dennis Hancock

“We want to have bales wrapped within three hours,” Guither said. “If we have to, we’ll shut down the baler so that the wrappers can catch up.” The wet bales are moved from the field on wagons to the wrap site. Guither has two individual bale wrappers. This enhances his capacity to wrap and also provides a backup if one of them should break down.

“We use no less than eight layers of 1 mil wrap,” Guither said. “It’s important to use a quality wrapping material because integrity is really tested on large square bales. Once you get a $100 bale made, don’t skimp on 80 cents worth of plastic.”

A near perfect feed

Once bales are wrapped, Guither emphasized having a good storage area. “Bales need to be kept where there is good drainage. Putting bales near buildings or a road will help deter wildlife such as deer and raccoons that can cause damage to bales.” Guither routinely places bait stations around his bale storage area to prevent damage from mice.

Guither labels all of his bales by cutting and field number and keeps an inventory sheet with the forage quality of each bale lot.

The baleage is marketed based on the prevailing dry hay (15% moisture) price, adjusting for the higher moisture product. This way, the buyer is not paying for water, but they do pay for the higher transportation costs of the wetter feed.

A quarter century ago, Guither started making baleage to narrow his harvest window and to improve forage quality. But he’s also found that harvesting hay as baleage can add an extra cutting in some years, and there is no need for a shed to store the product, as would be the case for dry hay.

In summarizing his preference for making baleage, Guither said, “It’s a near perfect feed when it’s made right, and you save leaves. Animals want to eat it.”