Low alfalfa yields can be tiring

The author is an associate professor and extension agricultural engineer with the University of Wisconsin-Madison. 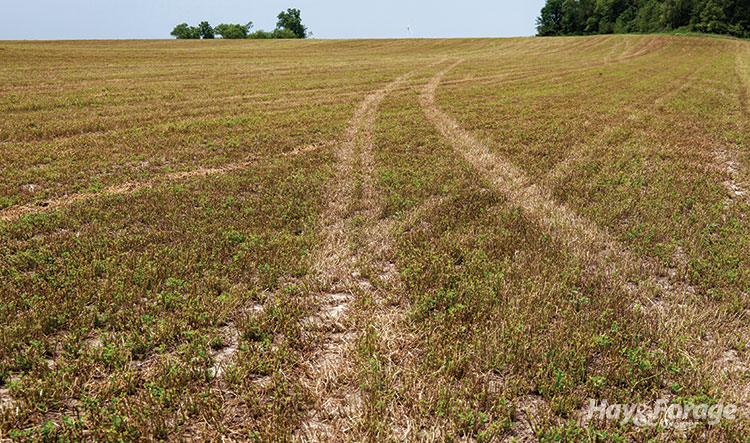 Have you ever driven past an alfalfa field a few days after harvest and noticed distinct tracks where the equipment traveled? Visually, it looks like the plants where the tires ran might have been damaged. They often appear stunted compared to the remainder of the field.

Alfalfa harvest, either for hay or silage, requires an array of machines to complete. The process and equipment we currently use for alfalfa harvest is efficient; however, these machines are applying pressure to the soil and the regrowing plants and crowns, which may potentially reduce alfalfa yield. Researchers at the University of Wisconsin-Madison are working to answer the question: “How much damage to alfalfa are we causing during harvest?”

Our previous research studied machinery movement during silage harvest, including rye, alfalfa, and corn, over an entire season and found that approximately 1,300 round trips between the storage site and the field were made by transport vehicles. In most cases, the transport vehicles being used were trucks designed for on-road travel with tires inflated for highway use. Recent research estimated vehicle weights and their ground pressure applied during alfalfa harvest. It showed that compared to machines with tires designed for agricultural use, on-road-designed vehicles applied three times or more the ground pressure applied by agricultural machines.

Armed with this information, a two-part study was developed to assess machinery traffic impact on alfalfa yield and to determine how much of a commercially harvested field was impacted by machinery traffic during a single year of alfalfa harvest. First, a plot study was conducted at the Arlington Agricultural Research Station involving three different tillage treatments at planting along with seven different wheel traffic applications at each harvest.

The tillage treatments were no-till, spring tillage only, and fall and spring tillage. Wheel-traffic treatments were designed to simulate both alfalfa and hay harvest with traffic being applied at harvest and different combinations of 24- and 26-hours post-harvest for silage and 48 and 72 hours post-harvest for hay. Yield was measured at each harvest with a plot harvester and wheel traffic was applied to the entire plot with a self-propelled swather weighing approximately 13,000 pounds.

The second aspect of this study installed Global Navigation Satellite System (GNSS) data loggers on every machine involved in the alfalfa harvesting process. Data was collected on one-second intervals and mapped using Geographic Information System software. The footprint of each machine was applied to the path it drove within the field to determine the percent area of the field that saw machinery traffic at least once during each alfalfa harvest. Results presented here are preliminary due to only two of the three years of data being included in the reported data set.

Preliminary results from the plot study described above showed that a single pass from the 13,000-pound swather reduced yield, but the change was not statistically different. Across the tillage treatments, statistically significant reductions in alfalfa yield were observed when the time between applied traffic and harvest were the greatest. These treatments were the simulated hay harvest with wheel traffic applied at 48- and 72-hours post-harvest. Preliminary average reductions were approximately 0.64 tons per acre across two growing seasons.

The average percentage of the field having machinery wheel traffic over two harvest seasons was 49%. In a worst-case scenario coupling these two studies, nearly half of the acres within an alfalfa field could have greater than 0.5 tons per acre yield reduction due to machinery traffic.

Some recommendations to minimize the impact of wheel traffic on alfalfa regrowth and yield would be:

• Minimize the number of on-road truck tires in alfalfa fields.

• Check that tire pressures on all vehicles are correct for the tire (both agricultural and on-road tires) to ensure proper tire wear is maintained and ground pressure is minimized.

Following these steps, especially maintaining in-field roads, will reduce the percentage of the field impacted by machinery traffic and maintain yield potential during the alfalfa growing season.

This article appeared in the August/September 2022 issue of Hay & Forage Grower on page 10.

Advice from a baleage pioneer Next

The beauty of baleage Previous