The beauty of baleage 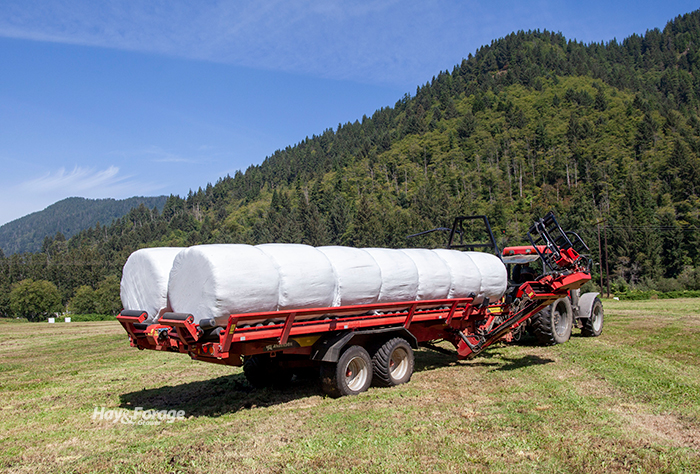 Somewhere between the territories of making dry hay and chopping haylage is the land of baleage. Its acreage is expanding at a rate that would gain compliments from the former Macedonian king and conqueror of all things land, Alexander the Great. Of course, Alex is no longer with us to offer such kudos or much of anything else, for that matter.

As one prominent beef seedstock producer told me a few years back, “Baleage is a game changer for the beef industry.” But baleage making is not limited to beef production. Dairy producers and many custom harvesters are also members of the Baleage Fan Club.

The surge in baleage production throughout the humid regions is relatively easy to explain. Though there are additional expenses involved, they are much less than a traditional chopped haylage system. Those farm units that are already set up to use large round or square bales can just as easily use baleage. The ability to harvest and preserve high-moisture hay shortens the needed wilting time, a real advantage where rain and humidity characterize the farming landscape.

It’s the shortened drying time and reduced harvest losses that result in the most direct economic advantage for baleage; it offers the opportunity for more yield with higher forage quality. On beef farms, baleage often takes the place of supplement feeding.

Perhaps a key advantage of baleage — one that is not initially considered — is less wastage during feedout. After incorporating baleage into a feeding program, this is often one of the first observations made, and the difference in waste can be upward of a 15% advantage for the high-moisture forage.

A few years ago, Iowa State University extension specialists estimated a cost savings of 33 cents per head per day for a cow-calf winter diet with baleage versus dry hay fed in a ring feeder. The advantage comes from improved forage quality, a lower supplement cost, and reduced wastage. With a higher cost for both hay and supplement this year, the cost savings is likely even greater.

This past spring, I visited with one beef producer who told me that they didn’t start making baleage because of reduced wilting time compared to dry hay; they adopted a baleage system to beat the drought years. Baleage offered them a system to make additional high-quality feed early in the spring from fall-planted winter annuals. If summer pastures shut down, they have prepackaged pasture to fall back on.

One of the precipitates of the baleage revolution has been the wrapping of low-moisture hay. This comes in the form of wrapping hay that is 18% to 35% moisture, or “sweet hay” as it’s sometimes called, or wrapping dry hay that is below 18% moisture. In the latter case, the plastic simply takes the place of a hay barn that may not be available on a home or rented farm.

Wrapping hay that is 18% to 35% moisture produces a product that has a “sweet” smell but does not go through a fermentation. The key to being successful with this practice is oxygen exclusion. In other words, don’t skimp on plastic. Many producers are using eight to 10 layers.

With a great deal of producer experience and a strong research effort in recent years, the recipe for making top-notch baleage — as opposed to failage — is no secret. Virtually any hay-type crop can be harvested and wrapped successfully, although some are easier than others, depending on their ability to go through a rapid and complete fermentation.

The accumulated laundry list of practices from producer experience and research that will lead to successful baleage production include:

1. Have the right equipment. Everything, including the baling tractor, the baler, and all bale-moving equipment, must be stouter and more powerful to handle the heavier bales.

2. Don’t cut more hay down than you can wrap. Remember, this is a system where one operation will impact the next.

3. Target a baling moisture range of 50% to 60% for optimum fermentation. In some cases, plus or minus 5% out of this range can also result in an acceptable product. Invest in a good moisture meter or use a microwave and scale to verify moisture content. Don’t guess.

4. Make dense bales; they wrap and preserve better. This may require a slower baling ground speed and a higher PTO speed. Research has shown that dense bales (at least 8 to 10 pounds per cubic foot) have a lower pH and offer an extended bunk life.

5. Wrap bales as soon as possible after baling. Most research shows that a reasonable target is to have everything wrapped within 12 hours of baling, but sooner is always better. If forage is allowed to heat before being wrapped, the buffering capacity of the feed rises, and it becomes more difficult to get a good fermentation.

6. Select a suitable site for storage, ideally on a graded, rock surface. Ensure that bales don’t impede natural water flow. Store bales where plastic integrity can be maintained, keeping them away from trees where branches may fall. Control weed growth in the storage area, but don't place bales on freshly mowed areas where coarse stubble can puncture the plastic wrap. Stored bales need to be routinely checked for damage from wildlife and rodent activity. Repair any holes in the plastic immediately.

7. For in-line wrappers, ensure that bales are uniform in size and pushed tight together, which prevents air pockets from forming.

8. Store and inventory baleage based on forage quality. Many producers use spray paint to mark the outside of individual bales or line wraps with field information. Target the highest quality feed to those livestock classes that are growing or lactating.

9. Feed baleage within nine months of harvest because forage quality begins to deteriorate after that point. It is also desirable to let bales ferment at least eight weeks before they are fed. Finally, use a feeding system that won’t promote waste.

Low alfalfa yields can be tiring Next

It’s the linkage, not the lignin Previous