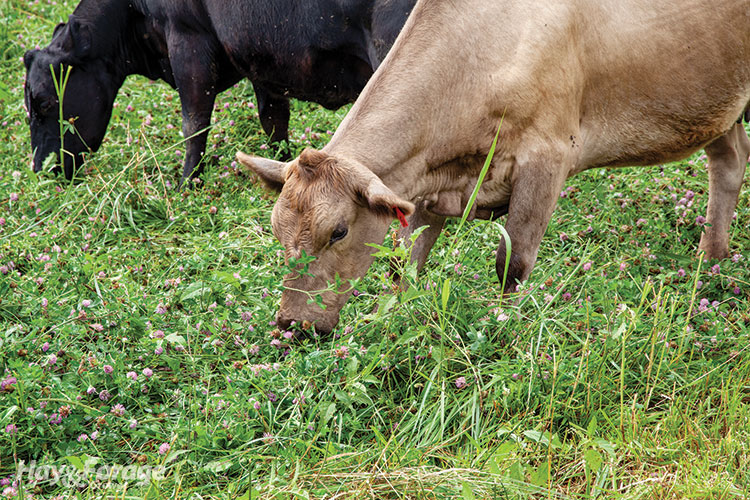 I grew up with conventional farming. Way back in the 1970s, most folks in farming thought that if you took a soil sample and applied the recommended amount of fertilizer, you were doing a good job of taking care of the soil. Of course, when I was growing up on a flatland Illinois crop farm in the 1960s and 1970s, we were still practicing crop rotation as well.

The typical rotation was corn following plowed-out sod, then soybeans followed by winter wheat. The winter wheat was typically oversown with timothy and red clover that was left in place for two to three years and then plowed out for the next corn crop. Toward the mid-1970s, my dad started seeding alfalfa after the wheat and left it there for four years.

We didn’t use very much fertilizer in those days, but as cropland moved away from rotations with forage crops and became just a corn-soybean rotation with no wheat, clover, or alfalfa, the need for more nitrogen fertilizer grew. As crop yields increased and rotations were no longer practiced, the need for more phosphorus and potassium also rose. About the time I completely left the home farm in the late 1970s, we were quite fertilizer dependent. By the end of the 1980s, cropland also routinely needed sulfur, corn needed zinc, and alfalfa needed boron.

For many years, I thought this was nothing more than just mining a finite amount of minerals out of the soil profile. It was an easy explanation for declining yields. The question of the day was: “Do you accept reduced yields by spending a fixed amount on fertilizer each year or do you try to boost yields by using additional fertilizer?”

As the 20th century waned, I came to understand a little more about soil biology. At first it was just about not needing nitrogen fertilizer on our grass farm. The longer we left the forage sward in place and maintained a strong legume component, we had no need for nitrogen fertilizer. Then we also began to find that with years and years of mixed grass-legume cover, we also didn’t seem to need the phosphorus, potassium, sulfur, or boron inputs either.

What we now know is that functional soil biology mediates all of the soil mineral cycles as well as pumping nitrogen into the pasture through not only Rhizobium nitrogen-fixation but also via a number of other microbial organisms. There is a close working relationship between our pasture plants and the soil organisms below the surface. Science from the last 15 years or so shows 30% to 60% of all photosynthetic sugars flow directly to soil organisms within 48 hours of their creation.

Nutrient cycles are not just a process of plants growing, dying, and being disassembled by microbes. There is an ongoing network of commerce between plants and microbes where the currency is carbon energy and minerals. As long as this indigenous economy is working within our soil, the need for purchased fertilizer can be very minimal.

In the past 20 years, our understanding of the role of soil microorganisms in every aspect of soil function has grown exponentially. If we want to rely on functional soil biology to supply our fertility needs, we need to be managing to create and then maintain soil life. There are several key factors toward maintaining soil health as put forward by the Soil Health Academy.

The first principle is avoiding soil disturbance. Tillage destroys soil life and function quicker than any other factor. One of the beauties of perennial grasslands is we can stay far away from tillage. My view of seeding a perennial pasture is that it’s something you do once in your lifetime. Take care of the pasture and it will be there for years and years.

The third principle is to enhance biodiversity at all levels on your farm. We saw a proliferation in the plant species diversity on our own farm as we made major changes in our grazing management. Soon, we saw more bugs, birds, and bigger critters. All was good.

The fourth principle is to keep a living root in the soil as many days of the year as possible. Once again, there is no easier avenue than through perennial pasture. And that brings us to the fifth principle of incorporating livestock into your farming operation. There is no real point of having perennial pastures if you don’t have livestock.

It’s a piece of cake!

This article appeared in the January 2023 issue of Hay & Forage Grower on page 16.

We need to be more drought resilient – Part 1 Previous