Grasses and girls grow on this Wisconsin dairy 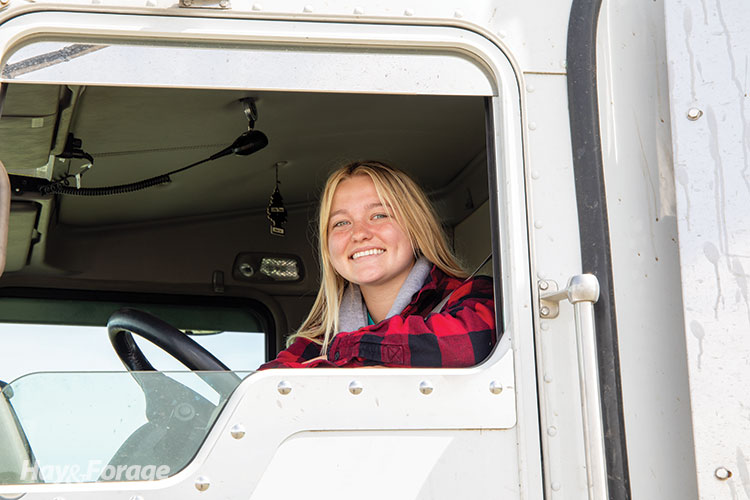 Kortney Woldt, the youngest of five daughters, drives a semi to deliver alfalfa from the chopper to the silage pile last summer.

One can only imagine what it was like for Daryl Woldt to get bathroom time back in the day, but you get the impression he wouldn’t have had it any other way. The fourth-generation dairy farmer and his wife, Amy, have dramatically grown their family business over the years while at the same time raising a quintet of daughters — Kelsey, Kayla, Kristen, Karly, and Kortney — who have all made farm contributions and continue to do so in some way, even though several now hold down other professional jobs. 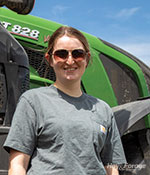 Kelsey Woldt works full time on the farm and plans to eventually take over the management duties from her parents.
But ladies aren’t the only thing at home on this farm. Woldt grows and harvests a variety of annual and perennial grasses for his 1,540 dairy cows — yes, more girls — and those of others. The grass revolution (or perhaps revelation) started about 15 years ago when he established some fields of tall fescue and festulolium. “We still have some of those original fields,” Woldt said. “These days, we use more meadow fescue and less tall fescue while also adding a little red clover.”

Woldt Farms, which has been a home for dairy cows since 1911, has stretched to 4,500 acres of owned and rented land over the years. When Woldt was growing up, the family milked 32 cows. After getting married, Daryl and Amy expanded the herd to 80 cows around 1990, and it’s been a steady stream of adding cows, buildings, and daughters ever since.

Grass has a role — and sometimes multiple roles — on every acre of the Woldts’ land. The farm has 2,600 acres of brown midrib and conventional corn that is harvested mostly as silage. The remainder of cropped land consists of about 600 acres of alfalfa-meadow fescue mix, 600 acres of perennial grass, 300 acres of winter wheat, and 250 acres of winter rye that is grown for cover crop seed. More on that later.

ial grass fields are cut six times per year for optimum forage quality. For years, they were stored either in silage bags or on a dedicated grass silage pile and fed through a total mixed ration along with the alfalfa-grass mixture and corn silage. Recently, that strategy has changed — or at least it has from spring through fall — when Woldt began greenchopping his grasses about three years ago. 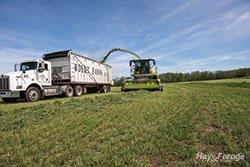 Woldt Farms grows and harvests about 600 acres of an alfalfa-meadow fescue mixture.
“We always had the grasses, and our Claas dealer suggested we try greenchopping,” Woldt said. “He had spent a lot of time in Europe where greenchopping is common. We’ve found that it seems to work well with our manure program. We can take off the greenchop and apply liquid manure right away throughout the summer.”

Woldt has three self-propelled forage harvesters, and now one of them is equipped with a direct-cut head that is dedicated to greenchopping.

“In our second year of greenchopping, we tested using a front-mounted mower with a self-loading forage wagon that is popular in Europe, but we didn’t like that at all,” Woldt explained. “We could only cut 10 feet compared to 20 feet with the direct-cut head. We also noticed that with any curves in the fields we were leaving strips because the wagon didn’t exactly follow the cutter. The other issue was that the precutter on the wagon couldn’t get the particle length as short as we wanted it. So now, we just use the direct-cut head and chop into a dump wagon or semitrailer,” he added.

Woldt is pleased with the greenchop system but admits that it takes someone to do it every day. Rain events can also be a challenge. The feeding software used on the farm has the ability to formulate two different rations for the same group of cows — one with greenchop and one with grass silage. If the fields are too wet to greenchop, they mix the alternative ration using conventionally harvested grass off their silage pile, as they do in the winter.

In the spring, when grass growth is rapid, Woldt will begin greenchopping when the grass is about a foot tall. Once fields reach a certain stage of maturity, he will harvest the grass for stored feed and go back to the initial field for greenchopping. “If it gets dry and growth slows, we just keep greenchopping,” he noted.

Once harvested, Woldt uses trucks equipped with pumps that provide a uniform manure application pattern across the harvested grass fields. About 6,000 gallons of manure are applied after each cutting to provide nitrogen, which is essential for optimum yields. If field conditions are such that they can’t apply manure, then commercial fertilizer is used. “We see a huge difference in the grass where manure gets applied and where it doesn’t,” Woldt noted. “I think greenchopping allows us to use the nutrients in the manure much more quickly and efficiently.”

Annual forages and cover crops are also being utilized in a plethora of roles in the farm’s cropping system. Winter rye (or sometimes triticale) is no-till seeded in the fall following corn silage harvest. Some of those acres are harvested for ryelage in the spring. For the remaining acres, corn is “planted green” into the rye, which is then sprayed with glyphosate either just before or at planting.

Using a dribble bar, Woldt applies about 8,000 gallons per acre of manure to the winter rye after it has emerged in the fall. That treatment is repeated in the spring as the cover crop is growing, and then again soon after the corn has emerged. For fields where the rye is harvested as forage, the third application is made following cereal harvest but before planting corn.

Winter wheat is grown for grain, but of equal importance is the straw. It’s chopped dry, stored in silage bags, and then utilized in dry cow rations.

“On the wheat fields harvested this year [2022], we seeded a mixture of oats, clover, vetch, and winter rye,” Woldt said. “We then took a cutting in late October and will plant corn into the surviving winter rye next spring.” 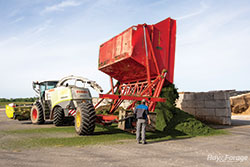 A load of grass greenchop is dumped for inclusion into Woldt Farms’ total mixed ration. Greenchopping is a daily routine on the operation.
The high-producing Holstein cow group at Woldt Farms is currently being fed a ration that is 53% forage on a dry-matter basis. Seventy-five percent of the forage component is BMR corn silage with the remainder made up of alfalfa-grass haylage and perennial grasses, either greenchop or ensiled. Silage from conventional corn hybrids is used in heifer rations along with ryelage.

When they started greenchopping, the cows received as much as 11 pounds of greenchop dry matter per day. More recently, that has been cut back to 6 pounds. “By doing so, if the grass does get a little too mature, or is very immature, it doesn’t make a big impact on the ration,” Woldt explained. “I’d like to feed more grasses and alfalfa, but my nutritionist favors higher levels of corn silage,” he added.

Forages get tested every two weeks for quality and moisture. In between laboratory tests, a Koster moisture tester is used to monitor any changes in dry matter. The greenchop gets tested for moisture every day. Moisture contents are entered into the feeding software, which automatically adjusts rations accordingly. Woldt noted that moisture on the greenchopped forage can range from 76% to 83%.

Through the years, Woldt has expanded, contracted, or changed with multiple dairy-related enterprises. The farm grows and stores enough feed to be able to sell inventory to other farms. Some of their customers purchase all of their forage from the Woldts, while others just purchase silage or haylage as the need arises. In one case, the farm provides a complete total mixed ration to another nearby dairy on a daily basis.

Woldt used to do a lot of custom forage harvesting, but that ended when they built their last freestall barn and expanded their own herd to its current level. “It just became more important for us to get our forage harvested at the proper time,” Woldt said. “Occasionally, we sell some of our standing crops to other farms off the fields, but we still do the harvesting and delivery.”

Along with a business partner, Woldt Farms also has a silage bagging business. They rent out bagging machines and sell bags and plastics for covering bunker and pile silos. They also offer secure covers, gravel bags, and tire sidewalls.

The newest enterprise undertaken by the Woldts is an on-farm store, which is managed by the youngest daughter, Kortney, who is a graduate of the University of Wisconsin-Stevens Point with a double major in business and soil science. Opened in May 2022, the store features cuts of the farm’s beef along with other locally produced specialty farm products such as cheese, maple syrup, goat milk products, and much more. The totally remodeled store is housed in the former workshop of Woldt’s father, Hugo. 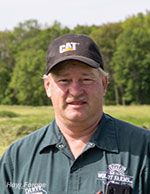 Daryl Woldt uses a variety of grasses, corn silage, and alfalfa to help fuel the over 1,500 Holstein cows that are milked daily on the farm.
Although it’s always difficult to know for sure how things will look in 10, 20, or 30 years down the road, Woldt Farms LLC appears to be well positioned to grow and prosper. Currently, the farm employs about 30 full-time workers and many part-time employees who fill in on weekends and during heavy workload times. Amy takes care of the payroll bookwork along with other office tasks. As with most farms, finding and keeping good labor is a major challenge.

Kelsey, the eldest of the daughters, is a graduate of the University of Wisconsin-River Falls with degrees in agricultural business and dairy science. She works on the farm full time, involving herself in all aspects of the operation. She’s positioned to be the farm’s future manager when her parents decide to take a step back.

“We’d like to milk more cows if we could find a home for the milk,” Woldt said of what he sees for the future. “Our feed business is good, but it’s riskier than providing feed for our own cows. We can never know who might go out of the dairy business or make other arrangements for feed.”

Regardless of how things might change in the future, it would still be a pretty good bet that cows, grass, and girls will be positioned in the picture.

For more information on Woldt Farms LLC, its various enterprises, and the Woldt family, visit woldtfarms.com.

From special ops to a special farm Previous