The 2015 hay and haylage crop is in storage and being fed, with many producers asking how their crops stack up, no pun intended. Determining a single crop’s quality can be a tricky task, let alone comparing from year to year. Where should you focus? What values mean the most? Variability continues to be a common theme, regardless of the hay or haylage rating system.

Historically, the industry has valued alfalfa based upon fiber content, assigning negative value to both acid and neutral detergent fiber (ADF and NDF). More NDF and ADF equates to lesser feed quality because these fiber components are the least digestible and filling. Less NDF means more high-quality sugar and protein per ton. 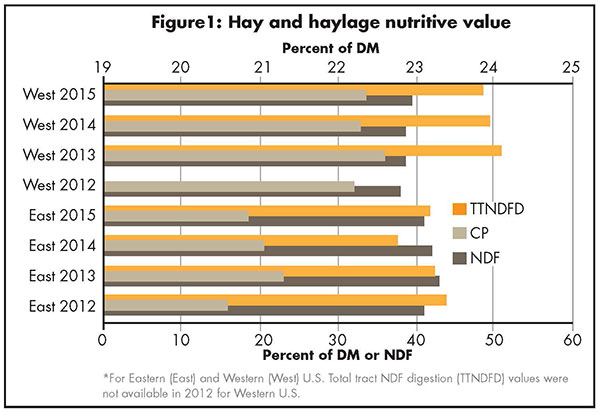 Regional and year-to-year trends show fiber content has been relatively consistent for Western regions (West) over the past four growing seasons (NDF; Figure 1), whereas the Eastern region, including the Midwest, (East) has been much more variable.

Both RFV and CA TDN have since been historically relied upon to value hay. RFV and CA TDN trends are very similar to those discussed above based on NDF, since these measures are simply another way to express ADF and NDF values. For the western U.S., the year-to-year crop has been very consistent on average for 2012 to 2015. For the eastern U.S., fiber content has decreased slightly over the past three years leading to slightly greater RFV, CA TDN and slightly more energy per ton and value (Figures 1 and 2).

Fiber content only reveals part of your feeds’ value. High-value hay, when fed to high-performing cattle, cannot be appropriately assessed by only measuring fiber. The industry has recognized this, evolving from using overly simple approaches (for example, RFV) to more advanced measures, such as relative forage quality (RFQ) or Milk2006, that incorporate nutrient content and digestibility. Highlighting the opportunity to use more advance measures, a conflicting conclusion could be drawn for 2014 and 2015 hay using CA TDN (Figure 2). For 2014 and 2015 crops from the eastern U.S., CA TDN would value these crops as similar on average.

Yet, the 2014 and 2015 alfalfa crops were very different, with fiber digestibility proving to be the differentiator for 2015 crop quality. Using the more appropriate ranking, considering digestibility, we can determine the 2015 crop had considerably more value: 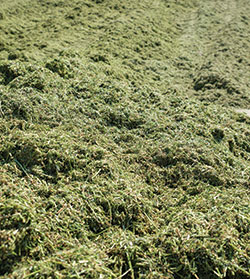 Though forage fiber values are important, they often do not reflect the true feeding value

David Combs, with the University of Wisconsin, has continued to push the industry even further ahead by integrating an advanced fiber digestion value, total tract NDF digestion (TTNDFD) into hay valuation. The TTNDFD is a research-backed fiber digestion value for high-performing cattle. Combs has suggested using TTNDFD to identify Premium quality alfalfa hay and, depending on fiber content, assign as much as $70 per ton more value for 48 percent TTNDFD hay relative to 42 percent TTNDFD hay.

Figure 1 shows how TTNDFD has varied for all crops across the U.S. from 2012 to 2015. For the West, TTNDFD is not substantially different for 2015. Yet in the East, TTNDFD has gained roughly 10 percent for 2015. Couple this rise with the decrease in NDF and the 2015 crop appears to have at least $15 per ton dry hay equivalent more value for the East.

In summary, a variety of measures and indexes are available to compare year to year. More advanced measures are available to more appropriately value hay, but regardless of the equation and metrics you choose, variability continues to reign. Work with your consulting team to determine which approach best suits your farm.

This article appeared in the January 2016 issue of Hay & Forage Grower on page 24.