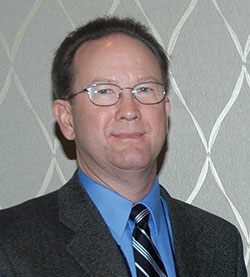 Peter Ballerstedt
HFG: It seems that the amount of science devoted to forage grass development and management is at an all-time high. Do you agree?

PB: I agree. Today we’ve seen the introduction of beneficial endophytes in varieties of tall fescue, perennial ryegrass and other species. We are witnessing the development and introduction of a new fiber digestibility assay that will more accurately predict the digestibility of fiber, and enhance the use of highly digestible, physically effective fiber from modern grasses in rations for high-producing dairy cows. The growing interest in soil health is demonstrating the value of grass in cropping systems, either as long-term stands or as short rotations. Nutrient management challenges will also lead to a greater use of grass in farming systems.

HFG: For many years, grasses never really got their due nutritional credit. Managed rotational grazing and new forage quality analytics seems to have put grass in a much better standing. Agree?

PB: Agreed! Modern fencing materials and harvesting equipment allow management options that weren’t practical earlier. Too often forage grasses were considered “marginal crops” and were sown on fields unsuited to more valuable crops. Management was likewise lax, and so were returns. Other countries were forced to pay greater attention to their grass resources and improve their utilization. Today we have greater ranges in maturity dates, disease resistance, winterhardiness, fiber digestibility and other important traits than ever before, but large quantities of old varieties are still being grown and sold. In addition, some popular species of cool season grasses have inherently lower fiber digestibility than others. Until we developed assays that could discern these differences, the “wrong” species were widely recommended.

HFG: Ryegrass genetics seems to be much improved today compared to 10 or 15 years ago. Why is that?

PB: New varieties from more continental environments (Europe) were introduced to the United States. Some of these were found to perform better than the more winter-active varieties from Mediterranean climates (New Zealand). From these, new varieties were selected and released for the U.S. market. The introduction of beneficial endophytes into these adapted varieties has resulted in varieties well-suited to wider areas of the U.S.

HFG: Given tall fescue’s historic reputation, was it initially a tough sell to get farmers on board with the new generation tall fescue varieties? What about now?

PB: Absolutely! At one meeting, a dairyman told me that his father had spent his life trying to kill the Alta (an old, rough-type tall fescue) his grandfather had planted, so he wasn’t pleased that his son was planting soft-leaf fescue! Fortunately, the performance of the grass and his cows convinced his father, at least partially!

Yes, the identification of the beneficial and novel endophytes has been a huge advance. Another challenge has been the memories of growers who replaced their KY-31 fields with endophyte free varieties back in the ‘80s and ‘90s. The importance of the endophyte for the survival of the grass, especially in the southern part of the transition zone, wasn’t appreciated. When these new stands didn’t persist, farmers became reluctant to repeat the experience.

HFG: Where do you feel grass management still needs to improve the most?

HFG: Down the road, what can we look forward to in terms of improved grass genetics and traits?

PB: The continuing search for unique traits in places where these species originated will lead to revolutionary new products: Stoloniferous perennial ryegrass and rhizomatous tall fescue are two examples. New and rediscovered species like meadow fescue will also play a role. The development and application of new breeding techniques and technology will produce advances that we don’t fully appreciate today.

HFG: You have taken a strong interest in human nutrition and given many presentations on the topic. What prompted this interest?

PB: It was my personal experience. In late 2007, I realized that I was an obese prediabetic. My wife and I learned that what we’d been told for decades — that the products of forage agriculture, meat and dairy products, needed to be restricted in a “healthy” diet — was not well founded. Further, we discovered that the majority of our calories do not need to come from carbohydrates; in fact, very few should. People have become, to varying degrees, carbohydrate intolerant.

This article appeared in the March 2016 issue of Hay & Forage Grower on page 20.