Emeritus professor and forage breeder at the University of Georgia and current owner of Bouton Consulting Group, LLC. 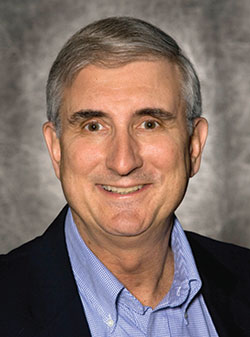 Joe Bouton
HFG: Looking back on your 27 years at the University of Georgia, is there any one accomplishment that holds special significance for you?

JB: I cannot say there was one particular accomplishment. Forage-livestock management is traditionally diverse with many management approaches and crop species involved. For our breeding program, it was always simply asking, “Will an improved variety of this species make an on-farm impact by overcoming a fundamental management problem?” Therefore, helping farmers and ranchers by developing varieties from different species that could positively impact forage production across the board was always our goal. It was this “portfolio” of varieties we developed that, when viewed as a group, has special significance to me.

HFG: There has been a lot of effort to beat or minimize the effects of fescue toxicosis. When did the concept of an endophyte-free variety come about?

JB: The concept probably occurred in the late 1970s when the endophyte was conclusively associated with the animal health problems of fescue toxicosis. Once the association was made, endophyte-free, or removing the endophyte from the seed, became the simple answer to the problem. However, there was a downside of less stand persistence when the endophyte was removed; this was realized too late. Hundreds of thousands of acres were planted and then died out.

HFG: What about the novel endophyte?

JB: The persistence problems of endophyte-free tall fescue presented the classic dilemma: animal health and productivity versus pasture persistence and dependability. Most farmers opted for better pasture persistence and tried to manage toxicosis with mitigation through interplanting clovers, removing seedheads, dosing animals with pharmaceuticals and so forth. However, it was known that not all endophytes were toxic, and strains were isolated that did not produce the main ergot alkaloid toxins.

So, from a research standpoint, the goal for nontoxic, or “novel strains” as they came to be known, was to use them to capture the persistence and productivity of toxic endophyte infection without production of the negative toxic ergot alkaloids. This meant matching up the best novel strains with elite fescue varieties being developed in our breeding programs. Using novel strains from, and in collaboration with, AgResearch Grasslands (New Zealand), we conducted the first published “proof of concept” research for novel strains, and concurrently developed the first successful commercial product called Jesup MaxQ. This fundamental research and variety development program was definitely one of the main accomplishments from our Georgia breeding program.

HFG: Given the persistence issues with endophyte-free fescues, do you think this has had an impact on the acceptance of novel tall fescues?

JB: I am sure the negative legacy of endophyte-free has spilled over into the limited sales of all current novel endophyte varieties; though they are more persistent than endophyte-free varieties, and if properly managed, as persistent as traditional toxic endophyte varieties. So, in my mind, for novel endophyte varieties to assume a major role in grassland agriculture, a cultural change is needed where the producer again becomes more willing to take the risk of replacing their current toxic acreage with novel fescue. In other words, we need to convince them that novel endophytes are the opportunity; their mindset is the challenge. This is starting to happen through on-farm demonstrations and educational initiatives like those of the Alliance for Grassland Renewal (http://grasslandrenewal.org/), but as with all cultural changes, it will take time.

JB: When I started my career, forage production systems in the Southeast were based almost exclusively on beef cattle, direct grazing and grasses. Perennials such as bermudagrass, tall fescue and bahiagrass, along cool-season annuals like ryegrass and cereals, were the dominant grass species. And this is true today, but these grass systems have two major limitations: the need for expensive nitrogen fertilizer to be productive, and even at their best, poor nutritional characteristics. So, our goal was never to replace this grass base, but to build on it with species that overcame these basic limitations.

Alfalfa is a long-lived perennial that fixes its own nitrogen and possesses desirable crude protein, fiber and energy concentrations. However, as a species, it was not persistent under grazing. Therefore, to become a component of this Southeastern grass-based system, it would need to withstand being grazed — sometimes continuously and intensively. So, we developed Alfagraze as the first grazing tolerant variety with newer varieties such as Alfagraze 600RR, Bulldog 805 and Bulldog 505 coming later out of our program. The real surprise came when we found out that producers in traditional alfalfa growing regions outside the Southeast also wanted to graze alfalfa. Alfagraze became the vehicle that made grazing alfalfa a more acceptable management practice in many traditional alfalfa-growing areas around the world.

HFG: Where do you see alfalfa production headed in the Southeast?

JB: Being able to graze alfalfa with southern bred and adapted varieties has certainly helped improve its use, but a better way to more easily fit the crop into southern forage management systems was also needed. For many southern hay producers, bermudagrass was the main hay crop, with over 28 million acres planted.

When we spoke with these producers about using alfalfa, they always thought they would need to plow up their existing bermudagrass fields in order to plant alfalfa. However, we “rediscovered” some past research that demonstrated one could grow alfalfa and bermudagrass together; they were very compatible as a mixture. So, the answer became to interseed alfalfa into existing bermudagrass stands! Therefore, using alfalfa in the Southeast is definitely expanding. University extension and commercial cooperative initiatives to promote alfalfa as a “tool” in traditional bermudagrass management will definitely accelerate this expansion.

JB: As a plant breeder practicing in academia, you want to help farmers by developing something tangible and practical for them, but at the same time, as a teacher, educating students is why you entered the profession in the first place. For me, there was equal satisfaction both from seeing my varieties and students succeed.

HFG: In 2004, you retired from the University of Georgia to become a divisional director at the Samuel Roberts Noble Foundation in Ardmore, Okla. Explain that decision.

JB: It was simply the right time and place for my wife, Mary Jeanne, and me. It was a time in my UGA career where retirement was possible and our children were grown and on their own. I also felt I had gone as far as I could for the university. Noble provided a great opportunity for me to become part of developing and directing forage breeding research on a national and international scale. With accomplished scientists like Rick Dixon already there, the foundation was also the perfect place to assess the possibility of incorporating basic biotech research into traditional forage breeding efforts. Finally, it was a matter of simply meeting and getting to know the Noble Foundation President, Mike Cawley, and its board that was made up of several Noble family members that influenced my decision. They were always professional and forward thinking in their goals and funding and a joy to have a bosses and friends.

HFG: What do you consider your most impactful effort or accomplishment while at the Noble Foundation?

HFG: How important is regional adaptation in the development of a cultivar?

JB: Adaptation is the first thing you must have in a cultivar before you can add any other traits. It is simply fundamental and analogous to an athlete’s ability to run and jump; if they can inherently run and jump well, they will probably be a good athlete in most sports. If a variety is adapted, it will probably be successful in the region it will be grown.

HFG: What is the biggest challenge of getting biotech-traited varieties to market?

JB: Public perception of the perceived risks is out of whack with the real risks. This has led to higher costs and regulatory problems. Although potentially powerful tools, genomics and transgenics have proven costly to develop and implement in any breeding program, but especially forage breeding. Transgenics also have the added burden of requiring freedom to operate for all the underlying patents and the great expense in time and money to meet regulatory requirements. These costs have been a big challenge for many crop species, but are even more so for traditionally low margin forage species. We are making slow progress, but the issue still remains of making these biotech tools easy to use and more cost effective for practical forage breeding programs.

HFG: Are you concerned that many universities and private companies have dropped their forage breeding programs?

JB: Oh, yes. I am really concerned about this trend because its negative impact is twofold: reduced training of the next generation of forage breeders and less development of improved varieties for a diversity of forage species. For the latter, it will have a major impact on the breadth and scope of pastoral agriculture, especially for the many minor, but important, forage species that rarely generate a high return proportional to research investment that only non-profit entities like foundations and universities accept as their mandates.

HFG: Tell us a little bit about what you’re doing now.

JB: After my retirement from Noble, we moved back to Athens, Ga., and I sat around for a few months just spending time with children and grandchildren; catching up; and organizing things. As an emeritus professor at UGA, I am also asked to attend and give seminars, along with mentoring graduate students.

I also started getting calls from seed companies and other entities to review their programs, give research advice and even help with farmer information and outreach. This activity grew so much that I had to form a consulting entity, Bouton Consulting Group, LLC; it’s not really a group, only me. So, according to my wife, “He hasn’t missed a day of work since he retired.”

HFG: What is your favorite food?

JB: If I had to choose one food, one last meal if you please, it would be the great American hamburger; fully trimmed with mustard, lettuce, tomato, pickles, onions, cheese and so forth. To quote my old boss, Mike Cawley, of course it also wouldn’t hurt if a few fries fell onto the plate!

This article appeared in the Februry 2016 issue of Hay & Forage Grower on pages 18 andn 19.