The lowdown on cutting height 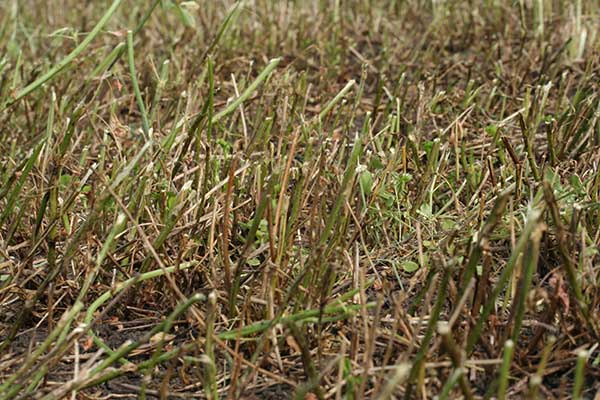 That said, not one size fits all. This is because the carbohydrate reserves for regrowth are located in different plant parts, depending on the species in question. It’s also because not everyone has tabletop fields with no rocks.

Let’s begin with alfalfa, the more complicated issue. It’s a species that stores carbohydrate reserves below ground in the taproot. This allows for a very close cutting height if so chosen. Cutting low (1 to 2 inches) results in more yield. A past Wisconsin study showed about a 0.5 ton bump in dry matter yield for each additional inch that alfalfa-cutting height was lowered from 6 to 2 inches over a three-cutting season. In a follow-up study, the difference was 0.13 ton per acre per inch for first-cut alone.

Though the overall quality of the forage was slightly better with the higher cutting height, the milk per acre values remained in favor of the lower cutting heights. The authors also cited the advantage (for dairy cows) of potentially lower potassium in the forage as more lower stem was harvested. Similar studies have been done in other states with confirming results.

Practically speaking, there is some downside to lower cutting heights. For many, there is the issue of rough fields and rocks. Low cutting heights might translate to wrenches being thrown and high machinery repair costs. There is also the issue of ash — or dirt. The odds go up for an elevated ash content as cutting height decreases, especially for coarse soils. Forage dry down may also be slower as the swath or windrow lays closer to the ground without being propped up by the higher stubble. Finally, with a shorter cutting height, more axillary buds are removed, though these are not as important as crown buds for subsequent regrowth.

In almost all cutting height studies for alfalfa, the final prognosis is to cut as low as practically possible in an effort to capture more yield. If that’s your end game, then the decision is pretty clear. However, for most alfalfa producers, the desirable approach is probably to stick with the more conventional 3- to 4-inch cutting height and avert the previously mentioned downside factors.

What if grass is involved?

Grasses, in general, are less tolerant of ultra-low cutting heights than alfalfa. Though it varies somewhat between species, regrowth is generated from above ground plant parts that, if removed, impede regrowth and stand longevity. Also, leaving some photosynthetic plant tissue aids in more rapid regrowth. Where pure grass or mixtures are involved, a minimum 3-inch stubble, preferably 4 inches, is generally recommended if the long-term persistence of the grass component is desired.

Grain guys got it good Next