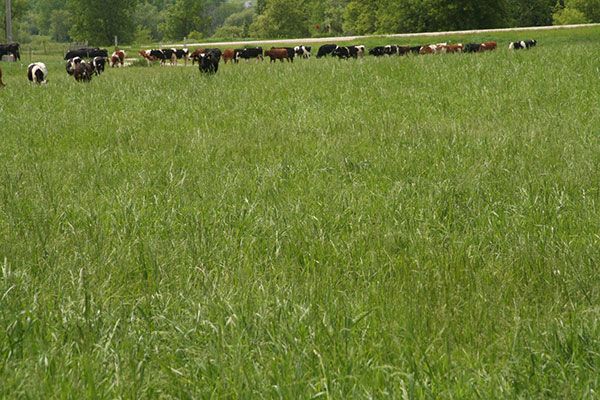 “While I think everyone should have some hay on hand for emergency feeding, baling pastures may not be the best option,” states Travis Meteer, University of Illinois extension educator.

There are downsides to baling pastures that are important to consider. When hot, dry weather is in the forecast, to some it is an easy decision to cut and bale hay because it will not be rained on. However, heat and dryness are not favorable for regrowth of cool-season grasses; sunlight penetration raises soil temperatures and causes evaporation, damaging soil biology.

Meteer notes in The Cattle Connection that baling removes nutrients from an area if the hay is not fed where it was harvested, causing possible productivity losses in the future. He suggests the option of purchasing hay to prevent this problem, as it may save nutrients that can add to the fertility of your land.

“Baling pastures in the spring can be successful,” Meteer informs. “Baling a designated area of a pasture for future emergency hay is often a good option.” It can provide the opportunity to apply manure from lot feeding that was unable to be applied to row crop fields. It may also be beneficial to purposely stunt cool-season grasses in this area of your pasture in an effort to seed and establish warm-season grasses.

Cutting and baling pasture in the heat of summer is a much riskier proposition. Meteer notes that purchasing hay may sometimes be the smart play when harvest costs and feeding waste are accounted for. He believes the worst thing you can do is bale too much pasture, forcing you to feed hay in the summer as a result of poor pasture productivity.