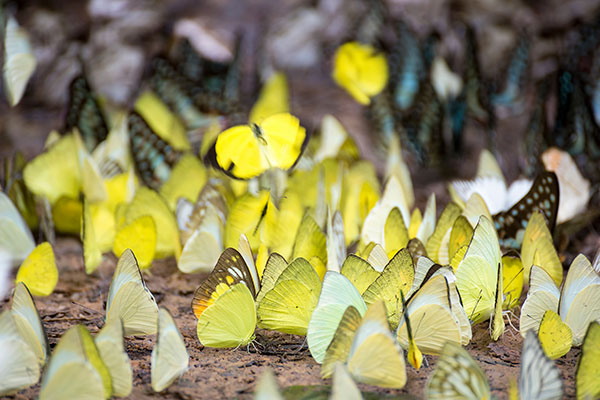 Butterflies in alfalfa fields may be free and make for a good photo opportunity, but they also can indicate future alfalfa worm-feeding issues. That’s the warning coming out of Central California where alfalfa fields are awash with yellow and white butterflies this summer.

“Some alfalfa fields appear more yellow and white than green with outbreaks of alfalfa caterpillar butterflies in the Sacramento and San Joaquin Valleys,” notes Rachael Long, an extension farm advisor in the region. “In certain cases, the populations have been massive,” she recently reported in the University of California extension’s Alfalfa & Forage News.

It’s not that the butterflies do any direct damage, but the eggs they lay soon develop into larvae known as alfalfa caterpillars. The yellow butterflies, sometimes referred to as sulfur butterflies, are cyclical, occurring in large numbers every few years. According to Long, contributing to high populations are factors such as slow and uneven alfalfa growth, a lack of predator insects such as the parasitoid wasp, and hot, dry weather.

The alfalfa caterpillar worm is green with a white stripe along each side. “They consume entire leaves and strip a plant, causing significant reductions in yield and quality if numbers are high enough,” Long notes. In severe cases, plants can be completely stripped of the high-value leaves.

Sulfur butterflies and the associated alfalfa caterpillar are not confined to California. The species can be found throughout the United States. According to the “Compendium of Alfalfa Diseases and Pests” (Third Edition), this pest does the most damage in the southwestern U.S., usually on irrigated fields. In southern regions, up to seven generations can occur, whereas in northern locations there may be as few as two.

The economic threshold for controlling alfalfa caterpillars is 10 healthy, nonparisitized caterpillars per sweep of the net. California specialists recommend scouting for the pest in conjunction with armyworms. They have produced a video that helps growers and consultants identify the worms, their natural parasite enemies, and how to differentiate a healthy worm from one that is parasitized.

If treatment thresholds are reached and the field is not close to harvest maturity, there are several chemical control options available for spraying alfalfa. Products containing the bacteria Bacillus thuringiensis (Bt) are also an option. Long reports that a number of fields in Central California have already required chemical applications to control their worm outbreak.

Abusing round bales Next