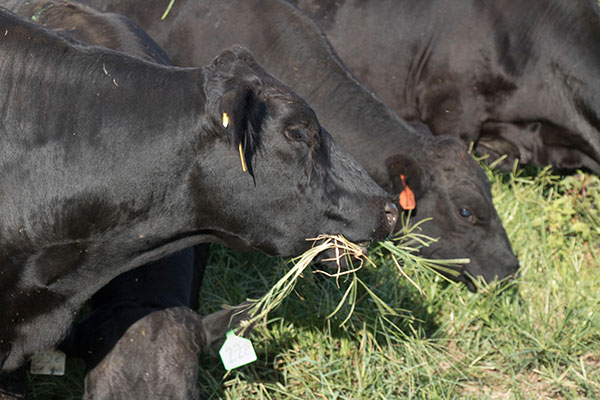 Making your living with pastured livestock involves the melding of plant growth and animal forage intake. Optimizing both components is the end game.

Keeping pasture plants within their linear (rapid) growth phase by not over- or undergrazing is paramount to any successful grazing operation. Equally important is getting animals to eat it.

“Animal productivity, be it gains, milk, or fiber, is primarily a function of feed intake, and it has to be good-quality feed,” said Dennis Hancock, University of Georgia extension forage specialist.

At last week’s Georgia Grazing School in Tifton, Hancock explained that forage intake is a function of bite size, bite rate, and grazing time. To assess forage intake on pasture, researchers measure the amount of forage taken per bite, how many bites are taken per minute, and the minutes spent grazing. The three fundamental factors are multiplied together to yield total forage intake.

1. Pastures are very short: When pastures are short or overgrazed, there is less mass per bite, more bites per minute, and the minutes spent grazing probably will go up for a period of time. Hancock noted, however, that at some point the animals will “wear down” as they try to graze short pastures. “There’s a limit as to how long an animal will graze,” he said.

2. Pastures are tall: Undergrazed or tall pastures result in the mass per bite going up, but the number of bites per minute declines. The time spent grazing will stay the same or slightly drop as gut fill occurs more quickly.

3. The animal’s mouth size is below average: The mass per bite declines with the overall effect of less than optimum forage intake.

4. The animal is ill or uncomfortable (heat stress): The animal’s grazing time is drastically reduced as most of its time is spent lying down or under a shade tree.

5. Limit grazing: Though grazing minutes are purposely restricted, mass per bite and bites per minute may actually go up, especially if they enter the pasture after not eating for a period of time.

6. Animal feels full: Grazing time is reduced and the animal may not bite at the same rate.

7. Poor forage quality (high fiber): The animal stays full longer as forage stays in the rumen for an extended period. The animal becomes a less aggressive grazer and both the number of bites and the minutes spent grazing suffer.

8. Rapid intestinal passage rate: Both the number of bites and the minutes spent grazing are enhanced.

Hancock also acknowledged that there are significant differences in the grazing habits of different livestock species. Cattle will spend up to eight hours per day grazing. Their bite rate is relatively constant at 48 to 54 bites per minute but can range from 30 to 90.

The grazing time for cattle is also genetically influenced. In one grazing study, identical twins grazed almost exactly the same amount of time, but the differences between twin pairs differed by up to 40 percent.

Don’t take too much of a good thing Next