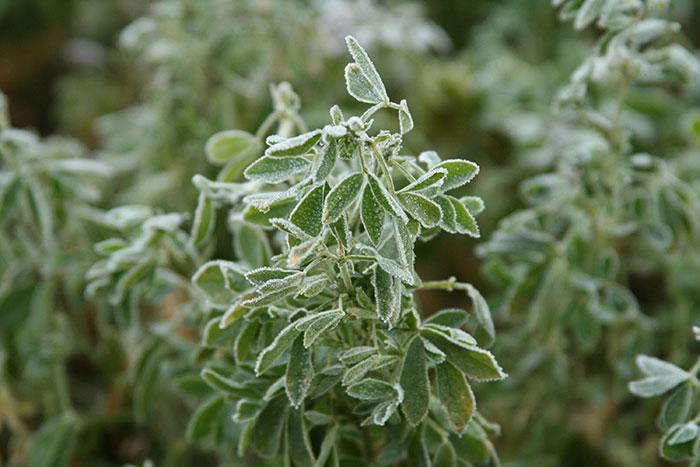 An early spring results in equally early alfalfa growth. It also offers added frost-damage risk before summer sets in for the long haul.

It’s not always easy to assess the potential damage to alfalfa based solely on reported temperatures that are reported on local news outlets. Those temperatures are taken from controlled weather stations located in areas unlike conditions found in most alfalfa fields.

As such, frost damage to alfalfa can only be evaluated several days following the frost event. Here’s what the Kentucky specialists recommended for assessing frost-damaged alfalfa stands and the actions to take following a frost event:

Leaves may be impacted, and some twisting of stems’ ends may occur when temperatures drop below 28°F. Buds and growing points are rarely damaged. Alfalfa will normally outgrow this damage, and no changes in management practices are warranted.

Moderate frost: canopy temperatures in the range of 26°F to 27°F.

Freezing causes significant injury in the terminal growing point near the end of the stem; however, the entire stem is not killed. Axillary and crown buds begin to develop into new stems. The lower stems, not impacted by frost, will continue to grow normally; this results in a mixture of mature and vegetative growth that makes harvest decisions difficult. Avoid cutting moderately frosted alfalfa early since the stress of early cutting reduces both yield and regrowth rate.

Stems that were growing at the time of frost will not regrow. Regrowth comes from crown buds at the base of the plant. Following a severe killing frost, immediately cut alfalfa stands with sufficient growth to justify a harvest; this helps to maintain forage quality and allows regrowth from crown buds.

When stands are short, frost-damaged plant material can be left in place; this may delay but will not inhibit new regrowth. Severe frost-damaged plants can be grazed off. Waiting for frosted alfalfa to begin to dry will significantly reduce the chances of bloat. Another option is to use a bloat preventative. Since severe frost has the same effect on alfalfa as an early harvest, regrowth will likely be slower. Delay second harvest a week or more to allow the plant to recover its stored carbohydrates.

Before reseeding, assess the damage in new stands. The ideal stand density at the end of the first production year is 12 to 20 plants per square foot. If this number of healthy seedlings per square foot is present following frost damage, then no reseeding is needed. If stands do not consistently have 12 to 20 healthy plants per square foot, then thickening stands with a no-till seeder may be the best option. In most cases, seeding rates in the range of 10 to 12 pounds per acre should be sufficient for thickening frost-damaged stands.

Testing for grass composition Next