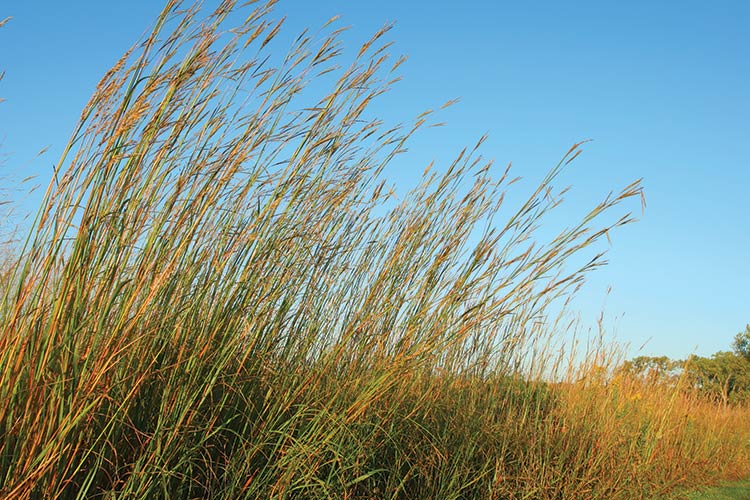 Diversifying forage inventories is the key to pulling through a drought. That might include planting annual forage crops or perennial warm-season grasses like big bluestem (pictured).
Ranchers in Montana and surrounding areas were hit with an unprecedented drought in 2017. For many, it was the second year in a row of such dire conditions. The wildfires that burned through eastern Montana in July only made matters worse.

“A lot of ranchers, especially those in the east, had already gone through their extra hay supplies last winter after they hadn’t been able to get a harvest in the previous year,” said Forage Extension Specialist Emily Glunk. “This left them with no reserves going into 2017.”

As part of the Montana State University Extension team, Glunk said she spoke with several ranchers during the past drought who reported an inability to get even a single harvest off their hayfields.

“The western and central portions of the state fared a little better; however, yields were still down significantly,” said Glunk. “With people who had adequate irrigation available, yields were not affected as badly.”

Along with ranchers being incapable of putting up hay in many circumstances, Glunk noted hay supplies became scarce across the state.

Despite the hardships, however, Glunk said, “Farmers and ranchers are resilient and the agricultural community is close-knit. Many ended up baling or grazing their cereal grain fields.”

For those ranchers who didn’t have access to such alternative forage sources, Glunk said many purchased hay from out of the region. Others were fortunate to receive donations thanks to the relief efforts of those in surrounding states. For some ranchers, however, destocking was the only option.

“We had some issues where not enough forage could be found,” said Glunk. “Sadly, some ranches had to sell off parts of their herd causing a lot of the auction houses to become overloaded with cattle.”

On the extension side, Glunk said she and her associates traveled the state hosting talks and workshops on drought and fire management. In addition, she noted, MSU Extension worked hard to improve the availability of information and publications related to ranching in drought conditions to producers. Those are available at http://bit.ly/HFG-MTdrought.

Going forward, Glunk said she believes diversification of forage species is going to be a key strategy for ranchers to better adapt and manage drought.

“Using a mix of cool-season and warm-season forages, both annuals and perennials, can help to prepare your pastures and hayfields for
inclement weather,” said Glunk. “Warm-season grasses are generally more water efficient than cool-season species and they produce a little better in high-temperature, low-moisture conditions. This can help to supplement perennial forage fields that perhaps aren’t performing well.”

Glunk said Montana ranchers must become better prepared and plan accordingly if they are to make it through future droughts.

“When deciding what to seed in your fields, consider planting some alternative forages that might work well no matter what the weather ends up looking like,” said Glunk. “Annual forages, in particular, can be very useful in dry years.”

In lower elevation areas, warm-season species such as sudangrass, sorghum-
sudangrass varieties, teff, or millet may offer viable annual forage options. In higher elevations, where growing seasons are shorter and the nights are relatively cool, growing trials have determined cereal grains and other cool-season forages are the best annual choices.

According to research published in a report from the Montana Farmers Union in early 2016, studies have shown that since 1900, the average temperature in the state has risen by 2.4°F and the number of days considered “extremely hot” has jumped threefold. Additionally, eastern Montana receives 10 percent less precipitation than it did 100 years ago.

Climate models are forecasting this trend to likely continue and possibly even intensify in the years ahead. The global average temperature is projected to rise between 2°F to 11.5°F by 2100. In Montana, data shows this statistic is happening 1.8 times faster than the global average.

“Hopefully, we will get some relief this year and not see a drought for the third year in a row,” said Glunk. “But unfortunately, that’s out of our control. If we do have a good year, the best thing ranchers can do is make sure they have enough forage in reserve to prepare for the following year because you never know what the weather is going to be.”

This article appeared in the February 2018 issue of Hay & Forage Grower on page 22.

A different kind of champion Next